Spontaneous acute UGI bleeding is common, with an incidence of approximately 100 per 100,000 adults per year and a mortality of 5% to 14% in the United Kingdom and North America.1,2 Both incidence and mortality increase with age. In the United States, patients with a bleeding peptic ulcer had an average hospital cost of $5000 in 1996.3 The incidence of UGI bleeding is six times that for hemorrhage distal to the ligament of Treitz.4 Presentation may be acute with hematemesis and/or melena, or chronic with iron-deficiency anemia.

In the absence of hematemesis, the source of GI bleeding is uncertain, and determining its precise location from the clinical presentation can be misleading. Approximately 45% of patients presenting to the emergency department with GI bleeding and no hematemesis have a UGI source.5 Melena is four times more likely to come from UGI bleeding than any other cause, but bleeding from the small bowel or right side of the colon commonly presents with melena. Hematochezia is passage of fresh or altered blood per rectum and is frequently due to colonic or rectal bleeding, but profuse UGI bleeding is the cause of severe hematochezia in 15% of patients.6 These possible sites of bleeding must be differentiated to allow effective intervention.

Endoscopy is the investigation of first choice and allows for rapid identification and treatment of GI bleeding. In a significant minority of patients, endoscopy is negative (normal), fails to achieve a full assessment of the UGI tract, or the presence of copious blood obscures the precise site of hemorrhage. These patients require additional techniques to identify the bleeding source. Newer optical imaging techniques such as wireless capsule endoscopy and push enteroscopy have been developed. However, they are labor intensive, time consuming, and are not widely available. Prolonged imaging time and the patient preparation required for capsule endoscopy precludes its use in the acute setting.

Imaging and radiologic interventions have become pivotal in the evaluation and treatment of GI blood loss when endoscopy is inconclusive or fails to control bleeding. Radionuclide imaging is highly sensitive in detecting active GI bleeding, with threshold sensitivity for sulfur colloid scintigraphy of 0.1 mL/min and for red blood cell scintigraphy of 0.2 to 0.4 mL/min.7 Prolonged imaging times can also be advantageous in detecting intermittent or obscure GI bleeding. However, imprecise anatomic location of the bleeding point, the requirement to return for sequential imaging over many hours, and its limited availability and applicability in the acute setting largely restricts radionuclide imaging to the investigation of obscure chronic blood loss.

Diagnostic catheter angiography is a sensitive modality for detecting active bleeding, with a reported threshold sensitivity of 0.5 mL/min in animal models, and this may be five to nine times more sensitive with digital subtraction.8,9 Catheter angiography can accurately localize the site of bleeding and allows definitive therapeutic intervention. However, it is invasive and carries associated risks of vascular access and catheter manipulation. Catheter angiography is also of limited sensitivity and specificity when bleeding is not active. It is usually reserved for definitive treatment of active bleeding resistant to endoscopic treatment or following noninvasive imaging identification of the point or likely cause of active bleeding.

In recent years, computed tomography (CT) has undergone major technologic advances. Development of multidetector computed tomographic angiography (MD-CTA) has provided accurate, sensitive, and rapid diagnosis of hemorrhage in a wide spectrum of clinical scenarios. High speed and narrow collimation allow coverage of large volumes that include the entire abdomen and pelvis in a single breath hold, producing images with reduced respiratory and motion artifact that can be accurately timed to acquire sequentially during arterial and portal venous phases.10 A recent in vitro study found the threshold for detecting bleeding with MD-CTA to be 0.35 mL/min.11 A recent meta-analysis of the use of CT in diagnosing acute GI bleeding confirmed the accuracy of MD-CTA, with a pooled sensitivity of 82% to 94% and a specificity of 74% to 92%.12 The sensitivity of MD-CTA has been shown to be higher in patients with active hemorrhage (91%) than in those with obscure GI bleeding (50%-81%).13,14 The drawbacks of MD-CTA are the associated radiation exposure and iodinated contrast requirements, particularly if repeat scans are required for intermittent bleeding. Preexisting high-attenuation material within the bowel lumen may also limit the diagnostic value of the study.

MD-CTA is rapidly and widely available and easy to perform. Even when active bleeding is not seen, it may demonstrate the bleeding site owing to high-attenuation thrombus, pseudoaneurysm formation, possible arterioenteric fistulas, or vessel irregularity. MD-CTA also aids in the planning of transarterial embolization, reducing subsequent angiographic radiation dose, contrast volume, and procedure time. Additional advantages of MD-CTA include depiction of extravascular and extraluminal pathology. MD-CTA is now established as the imaging investigation of choice in cases of suspected GI bleeding with negative or failed endoscopy (Figs. 53-1 and 53-2).

A number of clinical,15-17 endoscopic,18 or combined endoscopic and clinical19 scoring systems exist that quantify individual patient risk. Clinical risk stratification algorithms allow 6% to 10% of the lowest-risk patients to be managed as outpatients.15,17 Those requiring inpatient care are treated by a combination of acid-suppressive drugs and endoscopic therapy (Table e53-1). Early endoscopic risk stratification provides the best estimate of rebleeding risk.18,20 Patients with rebleeding have the highest mortality and morbidity; 95% of rebleeding occurs within 72 hours of admission.21 When peptic ulcers are actively bleeding or have stigmata of recent bleeding, endoscopic intervention prevents rebleeding in 80% and reduces mortality.21,22 In a U.K. national audit of acute UGI hemorrhage, the total population mortality was 14%, but for those younger than 60 years of age without comorbidities it was 0.6%.2 Most deaths were in elderly patients with multiple comorbidities. 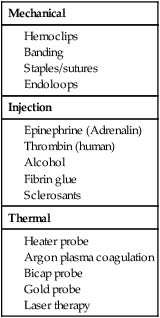 *These may be used singly or in combination.

Interventional radiologic treatment and conventional surgery are usually reserved for those patients who have failed endoscopic management. Embolotherapy for UGI hemorrhage was first introduced by Rosch et al. in 1972.23 Since its initial role in the management of poor surgical candidates, transcatheter embolization has expanded to become the preferred treatment when endoscopic intervention fails.24–27 Surgery is now generally reserved for patients who have failed endoscopic and radiologic treatments.

To date, there are no randomized controlled trials comparing embolization to surgery for the treatment of endoscopy-refractory bleeding. A retrospective comparison of surgery and transcatheter embolization in 70 patients with failed endoscopic treatment of bleeding peptic ulcers found no significant difference in the incidence of recurrent bleeding, need for additional surgery, or mortality, despite the embolization group being more elderly and having a greater incidence of ischemic heart disease.30 Another retrospective comparison study31 included 40 patients who underwent embolization and 51 patients who underwent surgery after failed endoscopic treatment. The embolization group was older and had more comorbidities, yet there was a lower 30-day mortality in the embolization group compared to the surgical group (3% vs. 14%), although this difference was not statistically significant (P <0.07). At present, there are a total of six retrospective single-center case series30–35 in the published literature comparing embolization and surgery in the context of upper GI bleeding resistant to endoscopic treatment, and these are summarized in Table e53-2. These study results demonstrate no significant differences in clinical success rates or mortality between patients treated with embolization and surgery, despite the groups treated by embolization generally being older with more comorbidities.30–35 The final choice of treatment modality in endoscopy-refractory UGI hemorrhage still depends partly on clinical urgency and local expertise and availability. 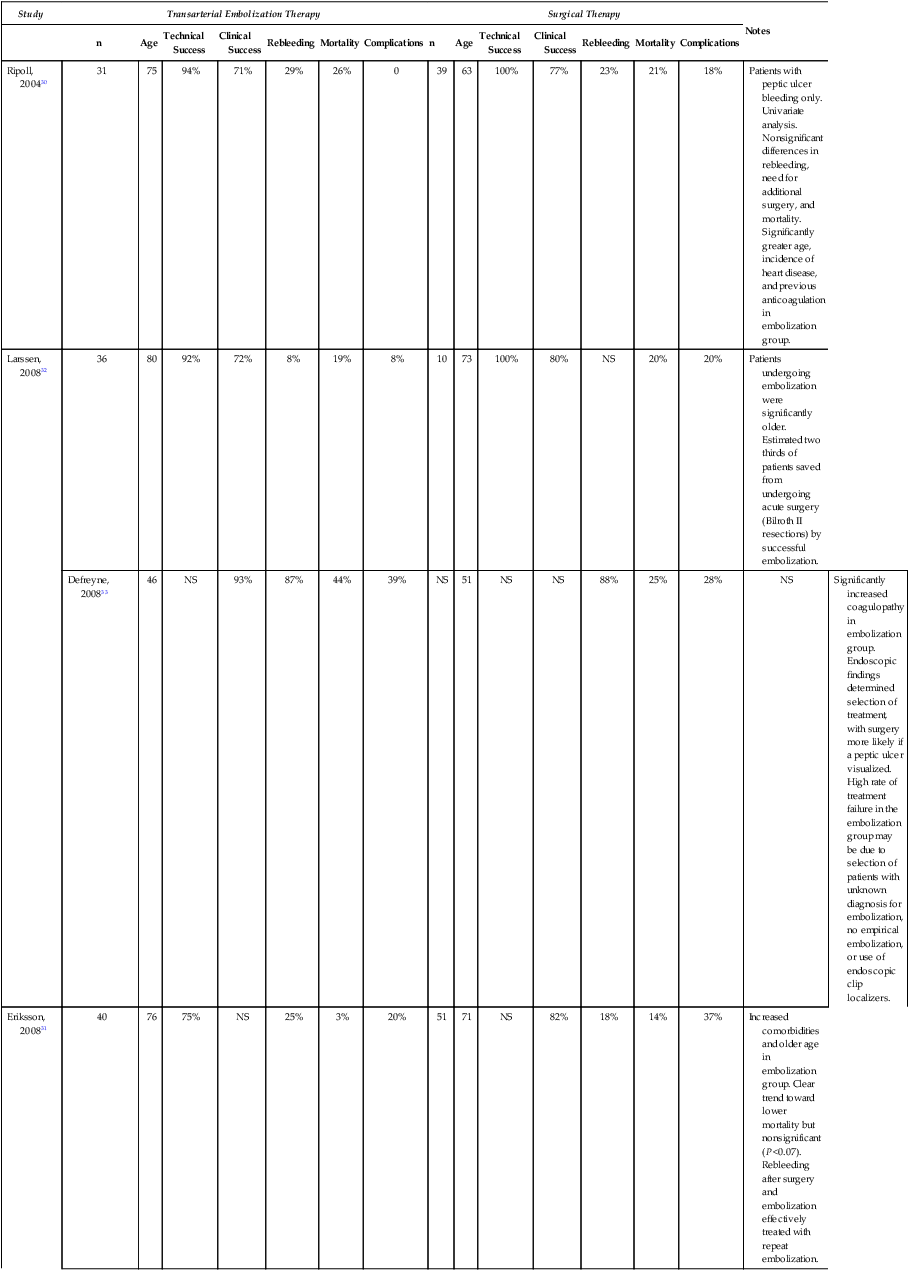 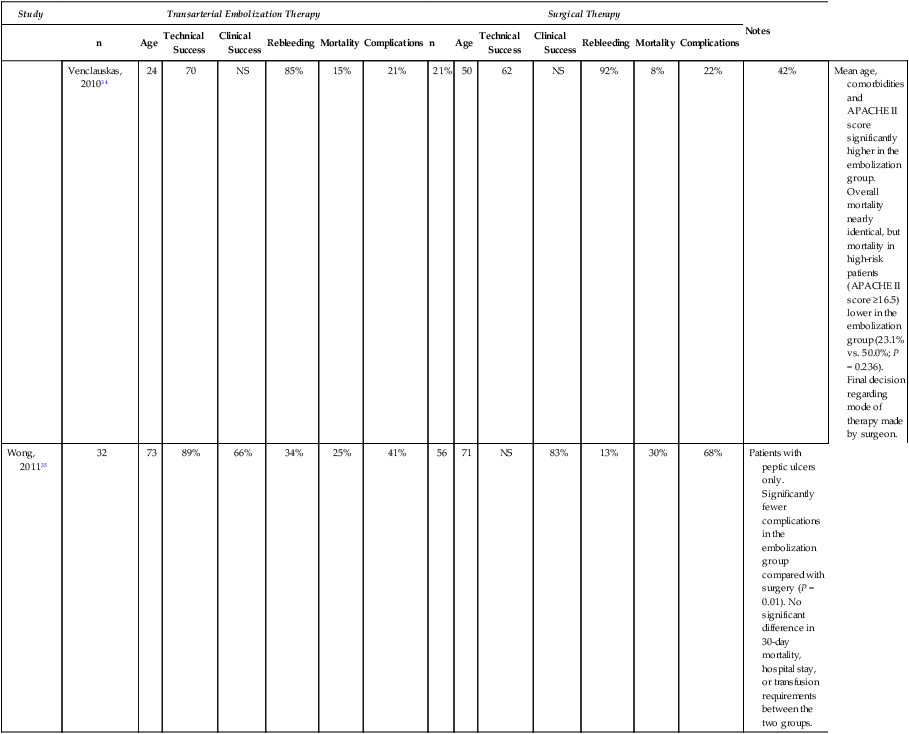 note: All studies are retrospective single-center case series for salvage therapy. Patient selection for either embolization or surgery in most series was a consensus-based process, with the exception of the study by Defreyne et al.,33 where the decision was made on endoscopic findings, and the study by Venclauskas et al.,34 where the final decision was made by the surgeon.

UGI hemorrhage is usually intermittent. Even patients with acute massive GI bleeding may have episodes of temporary hemostasis. If this coincides with acquisition of the CT or angiographic runs, the examination may be negative.36 Identifying the site of bleeding most commonly requires the patient to be actively bleeding. A useful indicator of active bleeding is the degree of hemodynamic compromise (systolic blood pressure < 100 mmHg and heart rate > 100 beats/min or clinical shock).27 Patients who have been aggressively resuscitated may not show hemodynamic changes, and the rate of fluid resuscitation required to maintain a stable pulse and blood pressure (the “meta-stable” patient) should also influence the decision to perform angiography. In general, the more hemodynamically unstable a patient is, the greater the chance of identifying the source of hemorrhage. For this reason, angiography, which is both diagnostic and therapeutic, is best performed in endoscopy-refractory acute UGI hemorrhage while the patient is actively bleeding and should not be delayed by resuscitation maneuvers, which can be continued in the angiography department. The endoscopist can assist the interventionist by placing multiple endoscopic clips at the site of endoscopically uncontrollable hemorrhage to facilitate embolization, even if the patient has temporarily stopped bleeding at the time of angiography.37

Recurrent UGI bleeding with no cause seen at repeated endoscopy or on MD-CTA (arterial and delayed phase) is a difficult clinical problem. In such patients, a transpapillary cause or reflux from brisk lower GI bleeding should be suspected.

Absolute contraindications to embolization are rare, if they exist at all. Alternative contrast agents (carbon dioxide [CO2