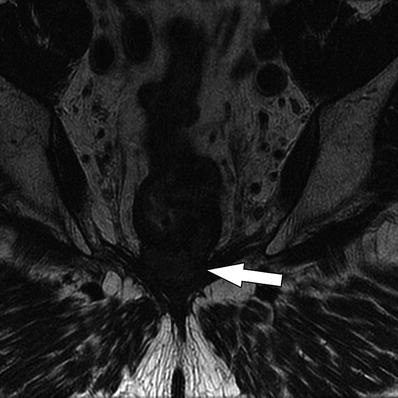 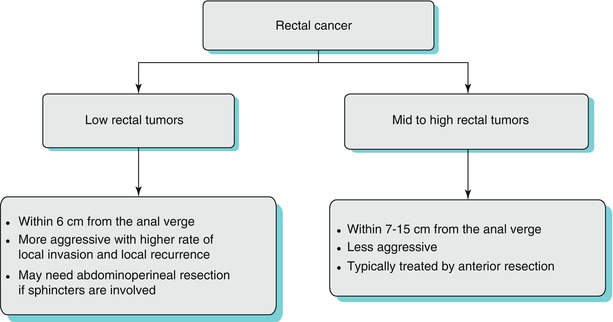 Algorithm 14.1 Algorithm of classification of rectal cancer and its influence on management and prognosis

Why Is Preoperative Staging of Rectal Tumors Important?

In the past, surgery was the only treatment available for rectal cancers. Hence, there was not much of a role or need for preoperative staging, and the rectal tumors were staged postoperatively based on the morphological features in the surgical specimen to predict prognosis. However, major advances have occurred in different fields of medicine including surgery, radiotherapy, and medical oncology, and there is now a well-defined role for preoperative chemoradiation therapy (CRT) in the management of rectal cancer in select group of rectal tumors [7–9]. In the United States, preoperative CRT is given to all rectal tumors stage T3 or greater as well in the presence of nodal involvement, whereas in Europe, the CRT is given more selectively for advanced T3 (rather than all T3) and T4 tumors. In spite of this difference in management, it is now clear that it is important to accurately stage the rectal cancer preoperatively to help decide which patients may benefit from preoperative therapy.

How Is Rectal Cancer Staging Done?


From: Edge SB, Byrd DR, Compton CC, et al., editors. AJCC cancer staging manual. 7th ed. New York: Springer; 2010. p. 143–64. Used by permission.
However, apart from TNM staging, there are other features that need to be evaluated in rectal cancer such as the presence/absence of extramural spread of the tumor, status of circumferential resection margin, extramural vascular invasion, and peritoneal involvement. All these four features have been shown to have prognostic significance in determining the outcome of rectal cancers [3].
Rectal tumor staging is commonly performed using various modalities such as computed tomography (CT) scan, magnetic resonance imaging (MRI) scan, and endoscopic ultrasound (EUS). We provide a brief outline of MRI staging of the rectal cancer followed by a comparison of the efficacy of the various imaging modalities in local staging of rectal cancer.

Local staging of rectal cancer has evolved over the years with improvements in MRI technology. Phased array coils have increased the accuracy and also allow wider field of view, which makes it possible to evaluate for pelvic lymphadenopathy. Endoluminal coils have pros and cons, but in general, phased array coils are commonly used and preferred over endorectal coils. With regard to the magnetic field strength, 1.5 T MRI is commonly used worldwide for rectal staging, but research is ongoing with greater field strength such as 3 T to assess if that can improve accuracy. An MRI protocol for the evaluation of primary rectal cancer has been well described in the literature, and we present the protocol used in our institution [10].
We routinely perform rectal MRI on 1.5 or 3 T scanners. Patients are requested to empty bladder and rectum prior to getting on table. The radiologist should help position the coil (position 8-channel cardiac coil relative to the location of the tumor) and be available to teach the fundamentals of rectal cancer anatomy and imaging sequences to the technologist. After initial sagittal T2-weighted image, the radiologist should mark plane for orthogonal axial images to the tumor (Fig. 14.3 and Table 14.2). 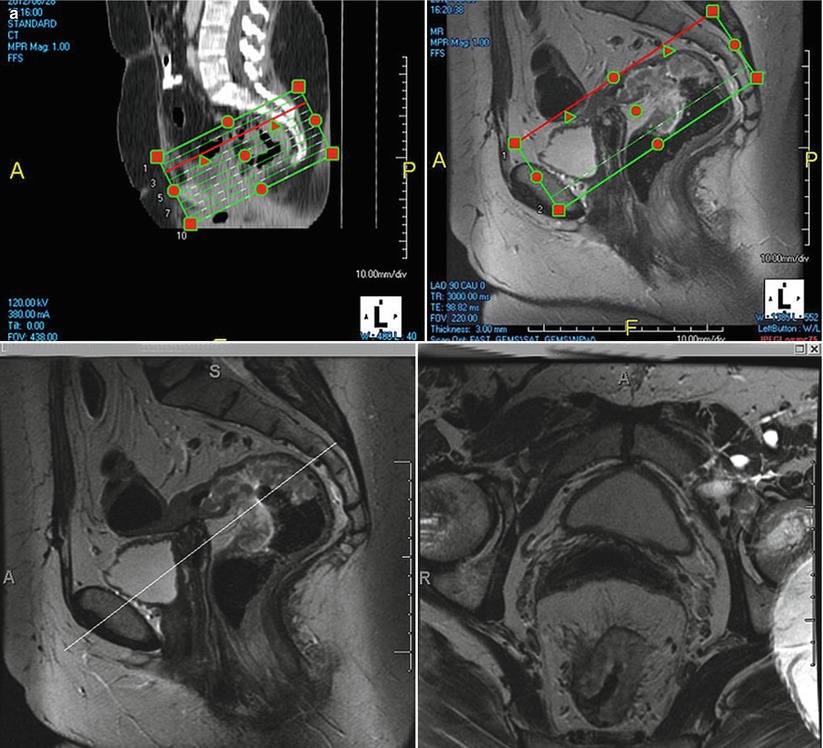 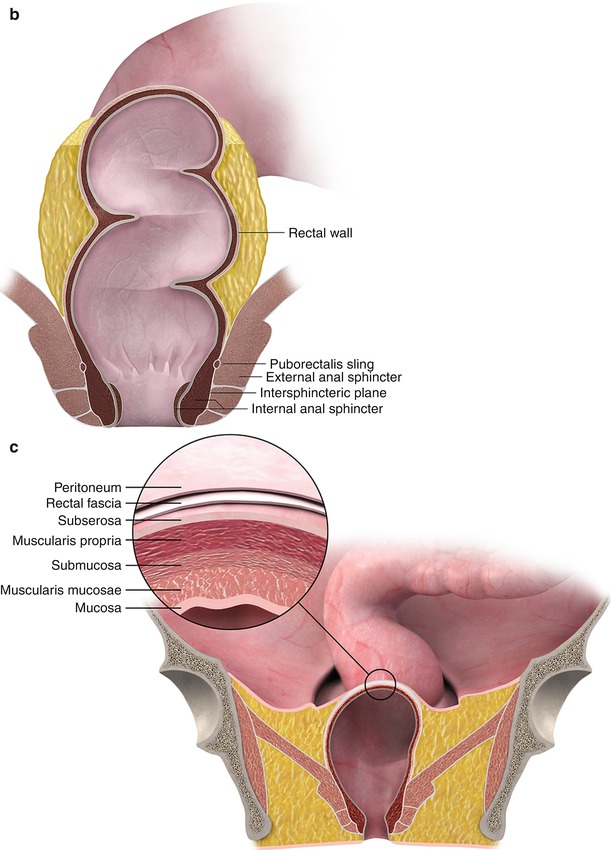 MRI (a) clearly depicts the anatomy and identify the rectal tumor. Color illustrations showing rectal anatomy (b) and layers of the rectal wall (c)
Table 14.2


From: Kaur et al. [10]. Used by permission
One of the biggest advantages of the MRI in rectal cancer staging is its superior spatial resolution and tissue contrast resolution. This helps to identify the relevant anatomy (Figs. 14.3 and 14.4) with great clarity and evaluate those features which determine prognosis. 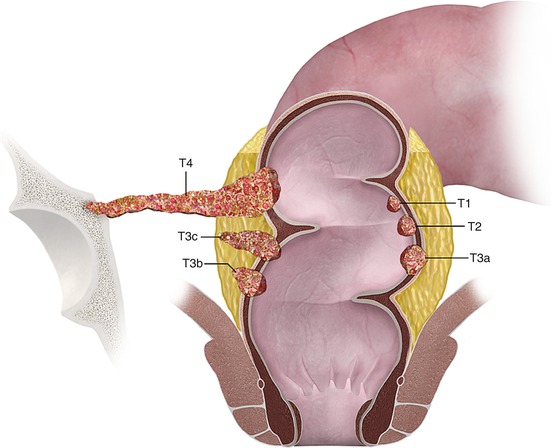 Color illustrations showing “T” staging of rectal tumor
As mentioned before, the first step in rectal MRI staging is to identify the site of the tumor (low, mid, or high rectal tumor). After that, the following features should be evaluated:

T staging assessment and presence of mucin within the tumor
2.

Presence of nodal involvement (both mesorectal and pelvic nodes)
6.

The different layers of the rectal wall can be identified on the T2-weighted sequences. The rectal mucosa has low signal intensity, the submucosal layer has high signal intensity, and the muscularis propria again has low signal intensity. Usually, the rectal tumor has intermediate signal intensity, but tumors with high mucin content will be of high signal. It is important to note the presence of mucinous features within the tumor as these portend a poor prognosis [11]. Shin et al. have reported that the 5-year overall survival rate in mucinous tumors (64.8 %) was significantly lower than in the nonmucinous tumors (79.8 %, P = 0.049) [11]. Also, these tumors tend to have less response to CRT compared to the nonmucinous adenocarcinomas.
While MRI has a high spatial resolution to allow differentiation of rectal layers and identification of tumor, “T” staging by rectal MRI is far from perfect. This is due to the fact that rectal MRI has limitations in differentiating T1 and T2 tumors as well as distinguishing between late T2 and early T3 tumors. The T staging accuracy of MRI in rectal cancer is reported to vary between 55 and 91 % [12]), but this high variability is accounted by bias in studies. For example, studies with more advanced rectal cancers or those performed in institutions with greater expertise have higher accuracy in T staging compared to studies with larger number of early rectal cancers (Figs. 14.4, 14.5, 14.6, and 14.7). In a large meta-analysis, Bipat et al. have reported 79 % sensitivity for T staging by MRI, which is probably a more true reflection in the general setting [13, 14]. 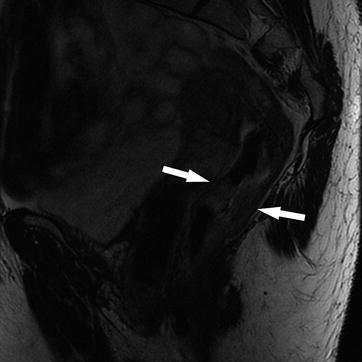 Sagittal T2W sequence shows a stage T2, mid rectal tumor (arrows), which is invading the muscularis propria, but there is no extension beyond this layer into the mesorectum. Note that the low T2 signal intensity of the muscularis propria is maintained. Pathology confirmed the radiological findings 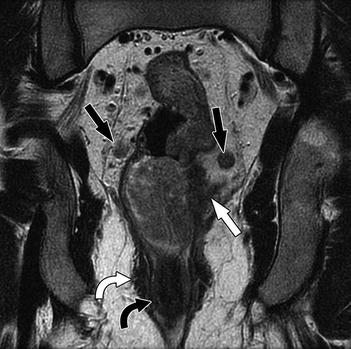 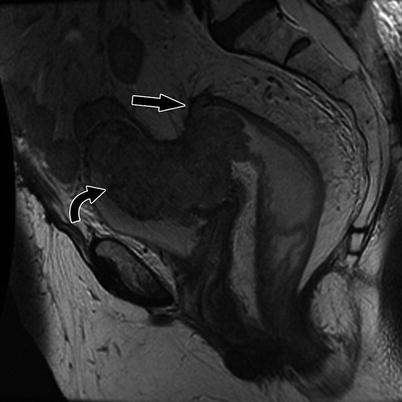 As alluded to before, MRI has limitations in “T” staging, and in particular, differentiation between late T2 and early T3 tumors may be difficult by MRI. However, it is now clear that this differentiation is not crucial. Rather, it is more important to assess the depth of extramural spread (Figs. 14.6 and 14.8). Tumors with more than 5 mm extramural spread fare relatively poorly compared to those with less than that degree of spread [15]. MRI is reported to have excellent accuracy for assessing this finding and ranges from 88 to 94 % [16]. In a landmark multicenter prospective study involving as many as 11 centers from different European countries, MRI was shown to be equivalent to within 0.5 mm for prediction of extramural tumor spread [17]. Both CT scan and EUS have lower sensitivity for assessing extramural spread compared to MRI [18, 19]. 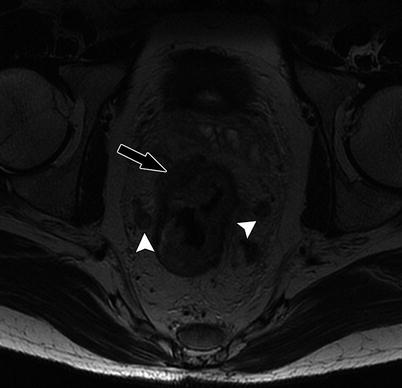 High-resolution axial T2W sequence shows mid rectal tumor with invasive margin in the right anterolateral aspect of rectal wall, and there is extramural invasion into the perirectal fat (black arrow), consistent with T3 tumor. Note that there are bilateral mesorectal nodes (white arrowheads)

One of the most important breakthroughs in rectal cancer treatment was the introduction of total mesorectal excision (TME). TME involves radical resection of mesorectal envelope, with resultant en bloc removal of the tumor, its lymphatics, and blood supply. This was based on the sound oncological concept that rectal tumors had a greater predilection for lateral or circumferential spread rather than longitudinal growth. Subsequent studies have now firmly confirmed that TME significantly reduces the local recurrence and improves survival compared to the conventional blunt pelvic dissection [20–25].
As TME became the gold standard treatment for rectal cancer, it became very important to assess the distance from the edge of the tumor to the surgical resection margin, which is termed as the circumferential resection margin (CRM). It has been shown that positive CRM involvement significantly increases the risk of local recurrence [21]). Many authors have demonstrated that the mesorectal fascia seen in MRI corresponds to the surgical CRM and that MRI is highly accurate in assessing CRM involvement by tumor [22–31] (Fig. 14.9). However, there is still some variability between authors as to when to report that the CRM is involved by tumor using MRI. Some authors have used 5 mm as the cutoff distance between the tumor edge and mesorectal fascia, while many others believe that 1 mm is the correct cutoff value given the precise correlation between MRI and histopathology. The MERCURY study was conducted using a 1 mm cutoff and that has reported an accuracy of 91 % and a negative predictive value of 94 % [23]. In a recent prospective study, Taylor et al. reported that the best cutoff distance for predicting CRM involvement using MRI is 1 mm and showed that using a cutoff greater than this did not appear to identify patients at higher risk of local recurrence [24]. 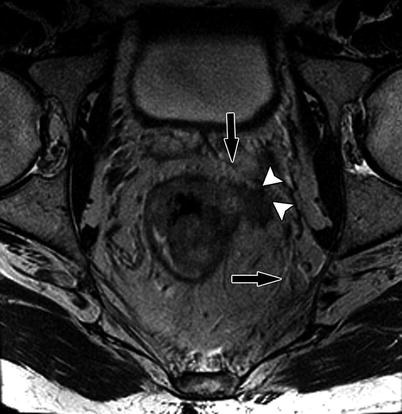 High-resolution axial T2W sequence shows advanced T3 mid rectal tumor with invasion of the CRM (white arrowheads). Note the normal mesorectal fascia is well identified on high-resolution axial T2W as thin low-signal-intensity layer (black arrow)
Teaching Point
Identify the mesorectal fascia on MRI as this forms the CRM. The next step is to identify if the tumor is touching the CRM or is less than 1 mm from the CRM (which would imply that the CRM is involved, requiring more aggressive neoadjuvant and surgical therapy). This information is key to management of rectal tumors.

Nodal staging by MRI is done by using three criteria – size, signal intensity, and border. While a size greater than 1 cm was traditionally used to indicate positive nodes, this has been proven to be inaccurate in many studies, and a significant proportion (32 %) of positive mesorectal nodes may be smaller than 5 mm. Hence, it may be more useful to use features such as heterogeneous signal intensity and/or irregular borders when assessing the nodes [25] (Figs. 14.10, 14.11, and 14.12). However, it is generally accepted that nodal staging by MRI has limited accuracy, similar to other imaging modalities. For example, Bipat et al. reported 66 % sensitivity and 76 % specificity for nodal staging by MRI, which was comparable to the EUS (67 % sensitivity and 78 % specificity). In another large meta-analysis of 84 studies, Lahaye et al. reported that there was no significant difference between MRI and EUS with respect to staging nodal status [26]. Currently, there is ongoing research to improve the accuracy of MRI in nodal staging using ultrasmall particles iron oxide, but as of now, this is not FDA approved for routine use in the United States [27–29]. 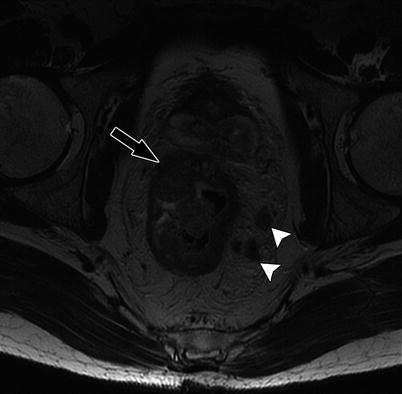