Pathology and Evolution of Perianal Sepsis and Fistulas

In the first stages, a crypt abscess forms, usually in the intersphincteric plane, caused by obstruction of the mucous glands within crypts at the dentate line (sometimes called cryptoglandular sepsis). Patients often present with acute perianal pain with signs of local infection, and in some cases, the abscess will extend into the ischioanal fossa. These are typically dealt with surgically. In some cases the abscess will discharge to the perineum leaving a residual fistulous communication to the anal canal. Both the point of origin and the direction that the infection tracks (either between, through or above the external sphincter muscle) will decide the eventual course of the fistula.
It is important to differentiate the pathology of fistulas caused by glandular infection from other fistulating diseases. Crohn disease is precipitated by deep mucosal ulceration, which may arise either from the mucosa or the submucosal glands, while tumour-related ulceration typically results from necrosis of the tumour wall.

A 1.5 T (or 3 T) MRI scanner with external phased array surface coils is needed for adequate resolution and contrast. Endoanal coils are not recommended; although they provide very high-resolution imaging with excellent delineation of the sphincters, the limited field of view may not detect the extensions and abscesses that influence the surgical approach, and they are uncomfortable and invasive to patients [6]. 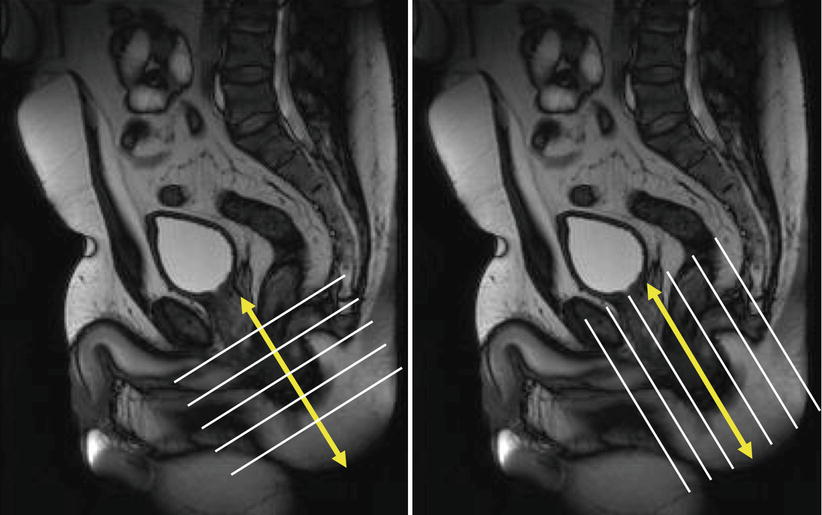 Correct field of view is essential to assess disease extent. Patient with high signal in the coccyx (black arrows) due to osteomyelitis in fistulising Crohn disease (arrowhead). Poor technique results in inadequate coverage of the lower sacrum and presacral space (white arrows)
With respect to the imaging plane, an oblique axial plane is required to determine the relationship of the fistula to the sphincter mechanism and whether it traverses the external sphincter. It also best assesses horseshoe extensions and the radial location of the internal opening. The oblique coronal plane allows assessment of the true height of the internal opening within the canal and fistula relationship with the levator ani muscles (Fig. 15.5). Sagittal images are useful in selected cases, for example, in the assessment of anovaginal fistula or for posterior extension where sacral or coccygeal sepsis is suspected, but are not used routinely in the authors’ practice. 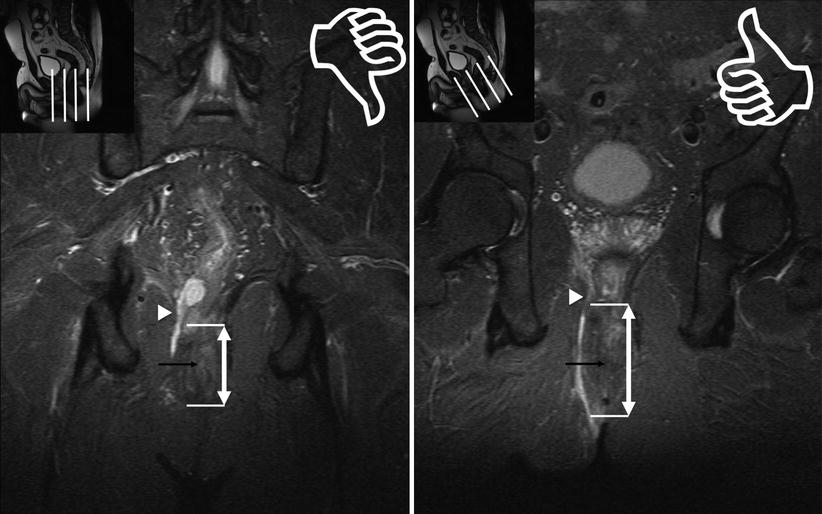 Various sequence selections have been proposed for fistula imaging. Evidence for superiority of one sequence over another is lacking, and choice depends to a degree on personal preference. It is important that the sequences chosen provide anatomic precision to map the fistula course and determine its relationship with other structures [7].
In the authors’ experience, axial and sagittal gradient echo sequences (e.g. FISP) through the pelvis provide a general overview and exclude pelvic disease processes. They also facilitate orientation to the anal canal for more subsequent detailed ‘fistula-specific’ sequences.
In the detailed imaging of the fistula itself, there are three main sequence choices: STIR, T2 fat-suppressed (SPAIR/SPIR) and gadolinium-enhanced T1 with fat suppression (2D or 3D). A majority of UK radiologists use the STIR sequence for fistula assessment (Tolan, personal communication). Both STIR and fat-suppressed T2-weighted sequences provide good contrast between hyperintense fluid in the tract and the hypointense fibrous wall of the fistula, while enabling discrimination with the anal sphincter muscles [7]. Post-contrast fat-suppressed T1 sequences rely on increased enhancement of inflamed fistula tracks for visualisation against the normal enhancement of other structures (e.g. muscle) and non-enhancement of fat [8].
In our routine clinical practice, with a high throughput of patients with Crohn disease, we routinely perform both STIR and T1 fat-saturated post-gadolinium sequences in all cases to maximise detection of extensions and differentiate granulation tissue from pus within fistulas.
Gadolinium-Enhanced Sequences
T1 Fat-Saturated post-gadolinium (3D VIBE or 2D T1 FS) 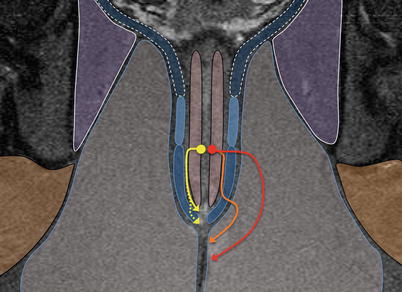 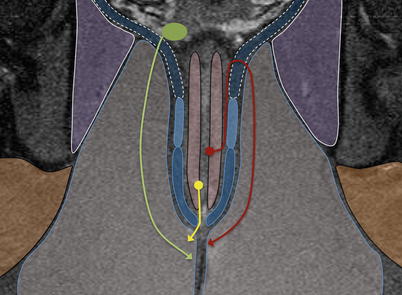 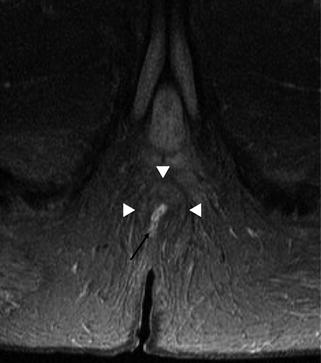 Tags: Cross-Sectional Imaging of the Abdomen and Pelvis
Sep 9, 2016 | Posted by admin in GENERAL RADIOLOGY | Comments Off on MRI for Perianal Fistula
Premium Wordpress Themes by UFO Themes
WordPress theme by UFO themes