Nerves of the lumbar spine

Chapter 10 Nerves of the lumbar spine

Innervation of the lumbar intervertebral discs 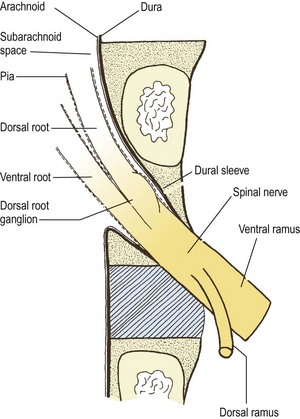 Figure 10.1 A lumbar spinal nerve, its roots and meningeal coverings. The nerve roots are invested by pia mater and covered by arachnoid and dura as far as the spinal nerve. The dura of the dural sac is prolonged around the roots as their dural sleeve, which blends with the epineurium of the spinal nerve.

The medial (or central) end of the spinal nerve may be difficult to define, for it depends on exactly where the dorsal and ventral roots of the nerve converge to form a single trunk. Sometimes, the spinal nerve may be very short, less than 1 mm, in which case the roots distribute their fibres directly to the ventral and dorsal rami without really forming a spinal nerve. Otherwise, the roots generally form a short trunk whose length measures a few millimetres from the point of junction of the nerve roots to the point of division of the ventral and dorsal rami.

The spinal cord terminates in the vertebral canal opposite the level of the L1–2 intervertebral disc, although it may end as high as T12–L1 or as low as L2–3.1 Consequently, to reach the spinal cord, the lower lumbar (and sacral) nerve roots must run within the vertebral canal where they are largely enclosed in the dural sac (Fig. 10.2). Within the dural sac, the lumbar nerve roots run freely, mixed with the sacral and coccygeal nerve roots to form the cauda equina, and each root is covered with its own sleeve of pia mater, which is continuous with the pia mater of the spinal cord. All the roots of the cauda equina are bathed in cerebrospinal fluid (CSF), which percolates through the subarachnoid space of the dural sac. 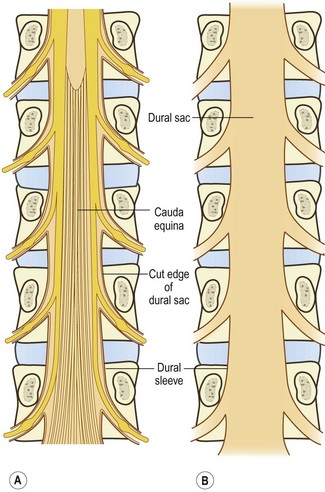 For the greater part of their course, the nerve fibres within each nerve root are gathered into a single trunk, but near the spinal cord they are separated into smaller bundles called rootlets, which eventually attach to the spinal cord. The size and number of rootlets for each nerve root are variable but in general they are 0.5–1 mm in diameter and number between two and 12 for each root.2 The rootlets of each ventral root attach to the ventrolateral aspect of the cord, while those of the dorsal roots attach to the dorsolateral sulcus of the cord, and along the ventral and dorsal surface of the cord the rootlets form an uninterrupted series of attachments (Fig. 10.3). 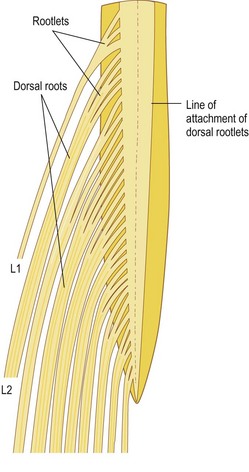 Relations of the nerve roots

The most intimate relation of the nerve roots are the meninges. The roots of the cauda equina are enclosed in the dural sac and bathed in CSF. Beyond the dural sac, individual pairs of roots are sheathed by pia, arachnoid and dura in the nerve root sleeves (Figs. 10.1, 10.4). The relevance of this relationship is that tumours or cysts of the dura or arachnoid can at times form space-occupying lesions that compress the roots. Running within the root sleeves are the radicular arteries and veins (see Ch. 11), and the relevance of this relationship is described in Chapter 15. 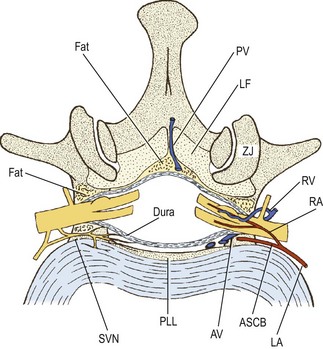 Figure 10.4 A transverse section through the vertebral canal and intervertebral foramina to demonstrate the relations of the lumbar nerve roots. The roots are enclosed in their dural sleeve, which is surrounded by epidural fat in the intervertebral foramina. Radicular veins (RV) and radicular arteries (RA) run with the nerve roots. Anteriorly, the roots are related to the intervertebral disc and posterior longitudinal ligament (PLL), separated from them by the sinuvertebral nerves (SVN), elements of the anterior internal vertebral venous plexus (AV) and the anterior spinal canal branches (ASCB) of the lumbar arteries (LA). Posteriorly, the roots are separated from the ligamentum flavum (LF) and zygapophysial joints (ZJ) by elements of the posterior internal vertebral venous plexus (PV) and epidural fat, which lodges in the recess between the ligamentum flavum of each side.

A space intervenes between the dural sac and the osseoligamentous boundaries of the vertebral canal; this space is referred to as the epidural space. This space, however, is quite narrow, for the dural sac is applied very closely to the osseoligamentous boundaries of the vertebral canal. It is almost a ‘potential space’, and the term ‘epidural region’ has been advocated as an alternative description to avoid the connotation of a wide, empty space (see Fig. 10.4).4

The epidural space is principally filled by a thin layer of areolar connective tissue, which varies from diaphanous to pseudomembranous in structure.4 Some investigators, however, consider this to be a substantive structure which they call the epidural membrane.5 The membrane surrounds the dural sac and lines the deep surface of the laminae and pedicles. Ventrally, opposite the vertebral bodies, the membrane lines the back of the vertebral body and then passes medially deep to the posterior longitudinal ligament, where it attaches to the anterior surface of the deep portion of the ligament.5 The membrane does not cover the back of the anulus fibrosus; it is prevented from doing so by the posterior longitudinal ligament as it expands laterally over the back of the disc. Consequently, the membrane blends with the upper and lower borders of the anulus fibrosus but in a plane just anterior to that of the posterior longitudinal ligament. Opposite the intervertebral foramen, the membrane is drawn laterally to form a circumneural sheath around the dural sleeve of the nerve roots and spinal nerve.5

Running within the areolar tissue of the epidural membrane are the anterior and posterior internal vertebral venous plexuses (see Ch. 11), and located within it are collections of fat. The epidural fat is not distributed uniformly throughout the epidural space but is concentrated around the nerve roots in the intervertebral foramina and in collections wrapped in areolar tissue and lodged in the midline recesses between the ligamenta flava at each segmental level.4

Individual pairs of nerve roots, enclosed in their dural sleeves, course to their intervertebral foramina along the radicular canals. Consequently, they are related laterally to a pedicle, and ventrally, from above downwards, they cross the back of a vertebral body to enter the upper portion of their intervertebral foramen. Dorsally, they are covered by a lamina and its ligamenta flava, which separate the root sleeve from the overlying zygapophysial joints.

Anomalies of the nerve roots

The clinically most significant anomalies of the lumbar nerve roots are aberrant courses and anastomoses between nerve roots;12–18 the morphology of these anomalies is summarised in Figure 10.5. 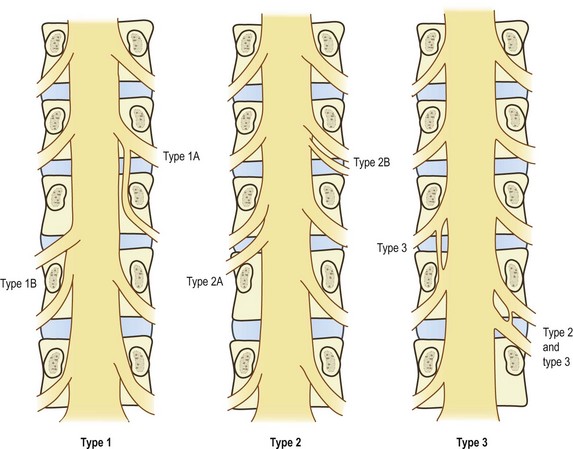 Type 1 anomalies are aberrant courses. Two pairs of nerve roots may arise from a single dural sleeve (type 1A), or a dural sleeve may arise from a low position on the dural sac (type 1B). Type 2 anomalies are those in which the number of roots in an intervertebral foramen varies. A foramen may be unoccupied by a nerve (type 2A), in which case the foramen above or below contains two sets of roots, or a foramen may contain a supernumerary set of roots (type 2B). Type 3 anomalies are extradural anastomoses between roots in which a bundle of nerve fibres leaves one dural sleeve to enter an adjacent one. This type of anomaly may be superimposed on a type 2 anomaly.

These anomalies, per se, do not produce symptoms. Patients with conjoined or aberrant nerve roots may pass their entire life without developing symptoms. However, doubled nerve roots occupy far more of the available space in the radicular canal or the intervertebral foramen than a single root. Therefore, if a space-occupying lesion develops, it is more likely to compress a double nerve root, and produce symptoms sooner than if a normal single root was present. Thus, although root anomalies do not render patients more likely to develop disorders of the lumbar spine, they do render them more likely to develop symptoms in the presence of space-occupying lesions.

The other clinical significance of anomalous roots relates to the interpretation of clinical signs. Clinical examination might indicate compression of a particular nerve root but if that root has an anomalous course, the structural lesion causing the compression may not be located at the expected site. For example, signs of L4 nerve root compression most often suggest compression in the L4 radicular canal or in the L4–5 intervertebral foramen; in the case of an anomalous L4 root being compressed, the lesion could be at the L3 or perhaps the L5 vertebral level, depending on the type of anomaly. Alternatively, in the case of doubled nerve roots, a single compressive lesion could produce signs suggestive of two lesions compressing two consecutive nerve roots.

Fortunately, symptomatic nerve root anomalies are not common, and such confusing considerations do not regularly complicate clinical practice. The incidence of anomalies has been estimated at about 8.5%,19 but when symptomatic the major types are readily recognised in myelograms.2 Nonetheless, nerve root anomalies should be borne in mind and considered as a possibility in patients with unusual distributions of neurological signs.

The surgical significance of nerve root anomalies relates to the mobility of anomalous nerve roots, the care necessary when operating in their vicinity, and the types of procedures that can be carried out to decompress them. These issues are explored in the surgical literature.2,16

Another feature of nerve roots, which is not an anomaly but rather a variation, is intrathecal anastomoses. Within the dural sac, bundles of nerve fibres may pass from one nerve root to the next, and such communications have an incidence of 11–30%.20 They usually occur close to the spinal cord and may vary in size from small filaments to substantial bundles.20 Since they occur proximal to the regions where nerve roots are liable to compression, these anastomoses are not of diagnostic clinical significance, but they are of relevance to neurosurgeons operating on the proximal ends of nerve roots.20,21

The L1– L4 dorsal rami are short nerves that arise almost at right angles from the lumbar spinal nerves.22 Each nerve measures about 5 mm in length23 and is directed backwards towards the upper border of the subjacent transverse process. The L5 dorsal ramus differs, in that it is longer and travels over the top of the ala of the sacrum (Fig. 10.6).23

Tags: Clinical and Radiological Anatomy of the Lumbar Spine
Jan 17, 2016 | Posted by admin in MUSCULOSKELETAL IMAGING | Comments Off on Nerves of the lumbar spine
Premium Wordpress Themes by UFO Themes
WordPress theme by UFO themes