Neurodegenerative diseases represent a large group of diseases whose common feature is a progressive loss of neuronal populations. They are characterized by their clinical symptom complexes, but definitive diagnosis relies on postmortem histologic findings. Cortical, subcortical, or cerebellar symptoms may arise, often in combination, depending on the sites of involvement. Often these diseases do not produce morphologic changes until they have reached an advanced stage, and so a major goal of CT and MRI lies in the exclusion of treatable conditions. PET can detect abnormalities of metabolism and neuronal transmission that are helpful in narrowing the differential diagnosis. PET-CT hybrid scanners have a limited role in this setting. MRI has emerged in recent years as the procedure of choice for brain imaging and has superseded CT in many areas. MRI provides better tissue discrimination and thus permits a more sensitive evaluation than CT. The possibility of fusing MRI and PET images was described in a previous chapter (pp. 61 ff). The number of neurodegenerative disorders, some of them rare, that have been investigated by various imaging procedures, is so high that entire books have been devoted to the subject. This chapter will restrict itself to illustrating the uses of PET and CT in the major forms of dementia and in selected diseases of the basal ganglia.

The CT anatomy of the brain is reviewed on pp. 61 ff.

Definition. Dementias are diseases that are associated with an acquired progressive impairment of higher brain functions. Symptoms include progressive memory loss, speech impairment, disturbances of spatial orientation, and apraxia.

The definitive diagnosis of neurodegenerative diseases is sometimes based on postmortem histologic findings.

Etiology. The leading cause of dementia is Alzheimer disease, which is the sole cause in approx. 55% of cases and coexists with additional vascular pathology in another 15%. Parkinson disease with dementia and Lewy body dementia are responsible for another 10% of cases. In 15% of cases of dementia there is an underlying vascular cause. The remaining 5% are referable to various neurodegenerative diseases, some of them rare, or develop as a result of metabolic and hormonal changes. Some statistics also cite frontotemporal dementia as a relatively common variant. Chronic subdural hematoma, normal pressure hydrocephalus, and brain tumors are potentially treatable causes of dementia.

Alzheimer disease. The most common dementia, Alzheimer disease, is characterized histologically by the extracellular deposition of abnormal proteins (β-amyloids). In a small percentage of cases genetically determined disorders are present which are known to have a causal connection, but in most cases the etiology is not fully understood. Alzheimer disease is the most common neurodegenerative disease. The average age at onset is approx. 70 years. Its prevalence increases with age: over the age of 85 every fifth person suffers from Alzheimer dementia. The socioeconomic impact of the disease is considerable as the average age of the population rises. Treatment options to date have been less than satisfactory.

Other forms of dementia. Vascular dementias are a result of multiple infarctions or, more commonly, cerebral microangiopathy. Lewy body dementia is characterized by cognitive impairment in addition to extrapyramidal motor disturbances as in Parkinson syndrome, with dementia antedating the movement disorders. Conversely, dementia may develop as a result of Parkinson disease. Depression may also be associated with cognitive deficits, and this condition may be difficult to distinguish from depression secondary to neurodegenerative dementia. The older term “depressive pseudodementia” implies that the dementia is reversible following successful treatment for depression. Frontotemporal dementia is characterized by behavioral disturbances in addition to cognitive deficits. Common symptoms are lack of social awareness, intrusiveness, and emotional blunting. Selective speech disorders are also common.

Huntington disease can be diagnosed by genetic testing.

The goals of imaging are to identify treatable causes of dementia and the early detection and differential diagnosis of the various forms of dementia. Morphologic and functional imaging can both serve these goals.

Epidemiology. Parkinson disease is the second most common neurodegenerative disease. It is diagnosed in approximately 1%–2% of individuals over 65 years of age. Its prevalence rises to 2%–4% after 85 years of age. The average age at onset is 61 years. Men and women are affected equally.

Symptoms. The classic symptoms of Parkinson disease—rigor, tremor, and hypokinesia—are referred to collectively as parkinsonism. In 80% of cases Parkinson disease is the cause of these symptoms, while 20% of cases of parkinsonism are due to neurodegenerative diseases such as multisystem atrophy, vascular diseases, and other rare causes.

Pathogenesis. Parkinson disease is characterized by a loss of dopaminergic neurons in the substantia nigra. These neurons project to the corpus striatum, where they are responsible for the coordination of movements. Consistent with the pathogenesis of Parkinson disease, an isolated presynaptic defect is located in the striatal dopaminergic synapse. This contrasts with other diseases causing parkinsonian symptoms, in which there is both preand postsynaptic degeneration in the corpus striatum.

Parkinson disease is characterized by a loss of dopaminergic neurons in the substantia nigra.

Huntington disease is a rare but well-characterized degenerative disease of the basal ganglia. It has an autosomal dominant mode of inheritance. Unlike parkinsonism, Huntington disease does not present with hypokinesia but with exaggerated, uncoordinated movements that may be described as choreatic hyperkinesia. The disease also causes cortical degeneration leading to behavioral disturbances, often resulting in social isolation. With the discovery of the genetic defect on the short arm of chromosome 4 that is responsible for Huntington disease, it is possible to identify even asymptomatic carriers of the gene who will develop the disease in later life.

Neurodegenerative diseases are based on a loss of functionally competent neurons. Theycan be classified according to clinical, morphologic, genetic, or histologic criteria (Alfke 2005). Changes are often subtle and are best demonstrated by MRI owing to its excellent soft-tissue contrast and multiplanar capabilities. CT can detect or exclude neurosurgically treatable causes of a progressive cognitive disorder or an extrapyramidal motor disease. Important entities in this regard are chronic subdural hematoma, cerebral metastases, intra- and extra-axial brain tumors, and normal pressure hydrocephalus (Table 5.1).

Imaging at various points during the progressive degeneration of neurons shows a continuum from no apparent changes to the most severe forms of atrophy. As a result, CT scans may (still) be negative even in fully symptomatic patients. Later stages of neurodegenerative disease are characterized by localized or generalized atrophy leading to the enlargement of adjacent subarachnoid spaces and/or adjacent portions of the ventricular system, with associated morphologic findings.

Advanced stages of dementia usually lead to atrophy of the affected cortical areas. Table 5.2 shows the most common patterns of involvement. 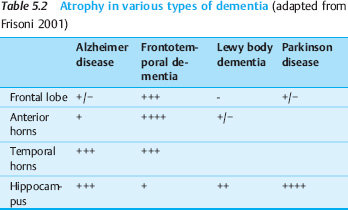 Sensitivity and specificity vary considerably in different populations. Automated volumetry techniques with MRI are regarded as the gold standard for evaluation of hippocampalatrophy but are not available at all centers. The combination of psychological test scores and morphologic findings should improve our ability to distinguish between patients with nonprogressive mild cognitive impairment and those with Alzheimer disease, although this distinction is more accurate with FDG PET.