Increased uptake of 18F-FDG can also be noticed in enthesopathies, e.g. adjacent to the greater tubercle of the head of the humerus in case of enthesopathies of the tendons of the rotator cuff (supraspinatus, infraspinatus and teres minor) (Sopov et al. 2009). The tendon of the pectoralis major and the deltoideus muscles are attached to the proximal diaphysis of the humerus. Tendinopathy of any of these two muscles can also result in focal increased 18F-FDG uptake (Sopov et al. 2009).

Stress fractures of the clavicle are rare in athletes and are mainly described as a late complication after radical neck dissection. A few cases of stress fractures of the clavicle, in which bone scintigraphy has been performed, have been described in a javelin thrower (Jones 2006), a springboard diver (Waninger 1997), a professional baseball player (Wu and Chen 1998) and a human tower stuntman (Roset-Llobet and Salo-Orfila 1998). Radionuclide bone scan supported the diagnosis of a stress fracture of the clavicle and showed distinct increased uptake. Radiographs showed periosteal reaction in the majority of these cases. In the professional baseball player, radiography did not show any abnormalities. The stress fracture in the javelin thrower was thought to be caused by repeated stress from contractions of the clavicular parts of the pectoralis and deltoid muscles. The position of extended fingers and wrists, pronated forearms and overlapping hands, when entering the water, may have transmitted impact stress from the hands to the clavicle thereby resulting in the stress fracture in the springboard diver. In the sport of building human towers, a traditional Catalan sport, the feet are put on both sides of the neck (Roset-Llobet and Salo-Orfila 1998). The heels are being placed on the trapezius muscles, while the tarsal bones are put on the clavicles. The weight pushes down the clavicles, while the muscles and ligaments are pulled upon. Approximately 1–3 times the body weight may be the critical force for collapsing the clavicles. In human towers, the force may be over four times the body weight, and this is sustained for more than 5 min, several times a day (Harrington et al. 1993). It is obvious that these pressures can be stressful enough to result in stress fractures. The stress fracture in the baseball player can probably be explained by the high demands on the throwing shoulders (Wu and Chen 1998).

Clavicular osteolysis is a well-known complication (Cahill 1982, 1992) of weightlifting but can also occur in overhand athletes, like tennis (Cahill 1982) (Schwarzkopf et al. 2008). It can be a disabling injury if it is not recognised in an early phase and no early intervention takes place. It is a stress failure syndrome of the distal clavicle. Early in the course of symptoms, bone scintigraphy shows intense uptake in the distal end of the clavicle (Schwarzkopf et al. 2008). In a study with 12 amateur weightlifters, two of them had osteolysis of the clavicle, with a positive bone scintigraphy, possibly caused by intense acceleration in weight training (Van der Wall et al. 1999). Matthews et al. described a case report of a female body builder with osteolysis of the distal clavicle. Bone scintigraphy was performed and showed asymmetric increased uptake in the affected acromioclavicular joint (Matthews et al. 1993)

Stress fractures of the scapula are also rare in athletes and have been described occasionally. Veluvolu et al. described a case of a jogger using weights in his hands for about eight weeks. Bone scintigraphy showed a linear band of increased uptake in the superomedial portion of the scapula, which was later confirmed by radiographs. Possibly the stress fracture was caused by overuse of the supraspinatus muscle when stabilising the humeral head during jogging with weights (Veluvolu et al. 1988). A scapular stress fracture has also been described in an offensive lineman who developed a painful shoulder during a game of American football (Ward et al. 1994). As part of an intensive training programme, he was lifting weights and he had already noticed pain before the game. Radiography showed an incomplete transverse radiolucent line in sclerotic bone at the underside of the acromion near its origin from the scapular spine. Bone scintigraphy showed increased uptake in this region. This stress fracture can possibly be explained by the intense weightlifting programme (Ward et al. 1994). A third case of stress fractures of the scapula has been described in a young female gymnast, after activities with excessive shoulder stress. Bone scintigraphy showed focal increased uptake in the scapula (Nagle and Freitas 1987). A fracture of the coracoid process has been described in a professional trap shooter. Plain radiograph showed a fracture through the base of the coracoid process; no bone scintigraphy was performed in this patient (Boyer 1975).
Khoury et al. described the case of a breakdancer who suffered from bilateral shoulder pain. Plain radiography of the shoulders was normal. However, bone scintigraphy showed symmetric and bilateral V-shaped uptake of the tracer at the borders of both scapulae. Possibly “bottom rock moves”, in which the dancer’s weight is supported by the neck and shoulders, have caused repetitive mechanical stress involving both scapulae, resulting in microfractures (Khoury et al. 2009).

Bone scanning can be used in the diagnosis of muscle injuries. Bone scintigraphy will be positive when cellular necrosis is present. Although the exact mechanism of the uptake of tracer into necrotic muscular tissue is unknown, it can possibly be explained by binding of the radiopharmacon to intracellular calcium deposits or denatured proteins (Nagle and Freitas 1987). No increased uptake of tracer will be seen in muscle cramps after exercise, as they are not associated to disruption of the muscle fibres.
Bone scintigraphy performed 24–48 h after running a marathon has demonstrated increased uptake in the affected muscles; the intensity of uptake is correlated with the perception of muscle tenderness. The uptake decreased over time and disappeared within a week (Matin et al. 1983). Increased uptake of the bone tracer in muscles (including shoulder muscles), damaged by exertion, has also been observed in a weightlifter (Valk 1984).
Muscle strain is a common sports injury. Usually muscle tears occur at the junction of the tendon and the muscle when the muscle is stretched beyond a critical tenseness. When a sufficient amount of necrosis occurs, those muscle tears can be detected on bone scintigraphy (Nagle and Freitas 1987). Murray has published a case of a weightlifter with muscle necrosis and ischemia with involvement of the teres minor muscle (Murray 1998).
Contusion of muscular tissue can happen when a muscle and its surrounding tissue have been struck forcefully. This may result in incomplete disruption of muscular fibres and often also in a haematoma. When the muscle contusion is correlated with the formation of a haematoma, uptake of radiotracer can be increased. This increased uptake peaks 3–4 days after the injury and then decreases as a result of removal of the necrosis.
Myositis ossificans may occur in injured muscular tissue, especially when this is accompanied by the formation of a haematoma. The uptake of bone tracer can be intense and may precede the occurrence of radiographically visible abnormalities by weeks or months (Nagle and Freitas 1987).

18.3.6 Osteoarthritis of the Acromioclavicular Joint

Primary osteoarthritis is the most common type of noninflammatory joint disease. Ageing is the most important risk factor for osteoarthritis. Degeneration of the AC joint progresses more rapidly after repetitive stress or a trauma. Bone scintigraphy shows increased periarticular uptake (Elgazzar 2004). The degree of uptake is proportional to the severity of the disease (McCrae et al. 1992) as is shown in Fig. 18.2. 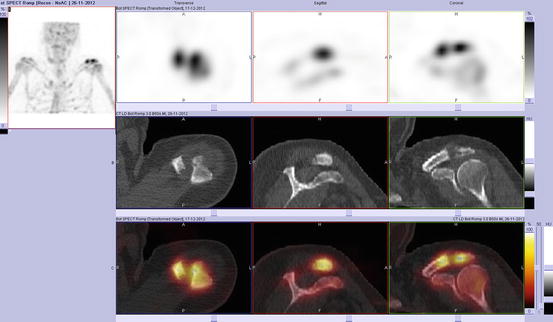