Anatomy of nutcracker syndrome. (a) Combined venogram and arteriogram demonstrates compression of the left renal vein between the superior mesenteric artery and aorta. (b) Anatomical configuration of left renal vein entrapment syndrome conforms to the shape of a nutcracker (overlaid)

In a patient with an unremarkable workup for the common causes of hematuria and/or flank pain, a multimodality approach of Doppler US followed by either CT or MR venography will often suggest a diagnosis of NCS. Direct transcatheter venous pressure measurement demonstrating a gradient between the renal vein and IVC is the gold standard in establishing the diagnosis [7].
Ultrasound imaging can often demonstrate the compressed renal vein and allow for measurement of the vein diameter and stenosis secondary to the compression (Fig. 22.2). Examination in long axis using color Doppler will reveal the presence of a velocity gradient from the perihilar to mesoaortic region [8–10]. The presence of increased flow within collateral vessels is further evidence of renal venous hypertension. Although ultrasound can elegantly display the stenosis and collaterals, studies have shown poor correlation between Doppler and the gold standard renocaval pullback pressure measurements [11, 12], which we believe is on the basis of variation in collateral decompression of the renal vein. For this reason, direct measurement of the pressure between the left renal vein and IVC remains important for establishing a diagnosis of NCS, with a pressure differential greater than 5 mmHg considered significant [3]. 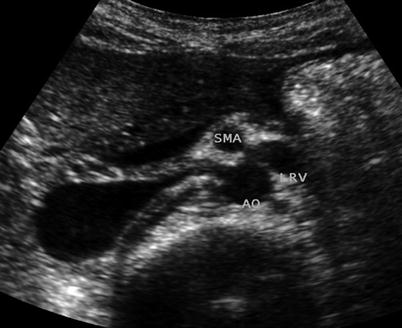 Retro-aortic left renal vein. Axial (a) and sagittal (b) CT images showing retro-aortic course of the left renal vein (arrowheads). The left renal vein is compressed between the aorta and spine
The veins normally draining into the left renal vein include the left gonadal vein, left ureteral vein, left inferior phrenic vein, and left adrenal veins [19]. In NCS, these vessels are often engorged due to the decreased outflow of the left renal vein. These collaterals lead to elevated pressures in the gonadal vein and in turn, elevated pressures in the smaller and more delicate vesicular veins and pampniform plexus, resulting in varicocele formation. Finally, as collaterals often inadequately decompress the obstructed renal vein, hematuria occurs, from transposition of blood across delicate renal sinusoids into to the collection system. In the author’s experience, hematuria, while often microscopically present, is rarely gross and/or clinically problematic in NCS patients with symptoms of pelvic congestion or varicocele, and NCS patients with persistent gross hematuria rarely have symptoms of varicocele or pelvic congestion. We believe that this is on the basis of renal vein pressures, and those with robust collaterals are likely decompressed well enough to avoid hematuria and vice versa.

A wide array of treatment approaches have been employed in an attempt to either decrease venous hypertension or alleviate the predominating symptoms of hematuria or pelvic congestion. Severity of symptoms, patient demographic, and understanding of available minimally invasive techniques can guide the clinician as to when and how to intervene.
The first reported case of treated NCS was in 1974 [20]. Since then, a number of surgical approaches have been described. These include direct reimplantation of the left renal vein [21, 22], SMA transposition [23, 24], nephropexy [25], autotransplantation of left kidney [26, 27], nephrectomy alone [28], and external stenting or bracing of the LRV [4, 29–31]. Most of these approaches were developed to decrease underlying venous hypertension. LRV transposition is the most commonly described surgical approach successfully utilized to alleviate pelvic congestion symptoms and hematuria [23, 32–36]. Some approaches, such as left gonadal vein ligation [30], gonadocaval bypass [4], splenorenal venous bypass [29], and/or embolization and sclerosis of pelvic varices are more directed to treat pelvic congestion symptoms. Ligation of collateral vessels, coil embolization of gonadal veins, and ablation of varices have been employed in conjunction with renocaval pressure gradient relieving procedures in cases where pelvic congestion resulted from NCS [3, 37].
For pediatric patients, some authors have described intermittent hematuria and proteinuria as a byproduct of anatomical changes of normal growth [12], providing support for a conservative approach, where patients are monitored up to 24 months to evaluate for resolution of symptoms [3, 21]. Severe pain and hematuria requiring transfusion are among the gamut of symptoms that would require more urgent intervention [3, 12].
More recently, endovascular stenting of the left renal vein has been reported. The WALLSTENT, first used in 1996 [37], continues to be the most commonly utilized stent in the United States because of its availability in large calibers and lengths that best correspond to LRV dimensions. Since that report, several studies have described LRV stenting with alleviation of symptoms of NCS [23, 38–45] (Fig. 22.5).

Pre- and posttreatment images. (a) Venogram prior to stenting in a patient with nutcracker syndrome demonstrates drainage through numerous collateral vessels. (b) Post stent placement in the left renal vein; there is return of drainage into the IVC. Images c and d show stent placement CT images in the axial and coronal plane, respectively
Several complications of LRV stenting including stent migration, thrombosis, and restenosis have been reported [40, 42, 45], and the theoretical long-term risk of stent erosion has also been discussed in the literature [12], which is especially relevant as these patients are generally younger. Given the paucity of cases in the literature and lack of data regarding long-term consequences of endovascular stenting, these authors feel the decision to pursue any intervention should be guided by clinical and radiological findings on a case-by-case basis.

Left renal vein entrapment syndrome, also known as nutcracker syndrome, involves compression of the left renal vein and can present with abdominopelvic pain, hematuria, and symptoms of pelvic congestion syndrome. Noninvasive ultrasound and cross-sectional imaging can show the anatomic abnormality; however, the diagnosis is only suggested if anatomic findings correlate with the clinical picture and is confirmed by direct renocaval pressure gradient measurement. Though LRV transposition and now LRV stenting are commonly employed methods for treatment of nutcracker syndrome, judicious management of NCS should take into consideration patient’s age, severity, and chronicity of symptoms along with current lack of data regarding long-term outcomes of stent placement.
References
1.
Grant JCB. Method of anatomy. Baltimore: Williams & Wilkins; 1937. p. 158.
2.
Only gold members can continue reading. Log In or Register to continue