Ultrasonographic studies are routinely conducted during prenatal care in the United States. As of 2000, nearly two-thirds of pregnant women received at least one prenatal ultrasonogram.1 However, the optimal number and timing of ultrasonographic studies during pregnancy has not been established. Although it has been deemed a cost-effective tool safe for mother and fetus, several limitations, including operator experience variability, fetal position, gestational age, and tissue definition on ultrasonography, may negatively affect this prenatal screening technique.2

Additionally, there is no conclusive evidence that routine ultrasonographic screening of all pregnancies is effective. In 1984, the National Institute of Health organized the Consensus Development Conference on Diagnostic Imaging in Pregnancy.3 This conference concluded that prenatal ultrasonography improves patient management and outcome only when there is an accepted indication.3 The Routine Antenatal Diagnostic Imaging with Ultrasound study (RADIUS) later conducted a randomized trial comparing a group of women who underwent first and second-trimester screening to a group who underwent ultrasonography only for medical indications, and found that screening ultrasonograms did not reduce perinatal morbidity or mortality when compared with the selective use of ultrasonography based on clinical judgment.4,5 In contrast to these findings, the Helsinki Ultrasound Trial identified a lower perinatal mortality rate in the ultrasound-screening group secondary to a higher detection rate of anomalies and subsequent termination of affected pregnancies.6

Current recommendations from the American College of Obstetricians and Gynecologists do not recommend examination of the globe, orbit, or adnexal structures as part of the routine fetal anatomy screening evaluation.7 However, reports of prenatal ultrasonography for diagnosis of diseases involving the eye and ocular adnexae have been described since the 1980s. Herein, we summarize a literature review of relevant reports to date.

The optic sulci are the first recognizable ocular structures, originating as indentations in each neural fold at approximately 22 days gestation. The optic pits develop from continued evagination of the sulci, and deepen to become optic vesicles lateral to the forebrain at 25 days. These vesicles remain attached to the neural tube by optic stalks that later develop into the optic nerves. The optic vesicles approach the outer wall as a focal thickening of cells that forms the lens placode in the surface ectoderm. In the fourth week of gestation, invagination of the lens placode forms the lens vesicle. Simultaneously, the optic vesicle invaginates back upon itself to form the optic cup, evolving into an outer pigment layer and an inner neurosensory layer. An additional invagination occurs that forms a groove from the ventral aspect of the optic cup posteriorly to the forebrain wall. This is the optic fetal fissure through which mesenchyme will eventually migrate to form the primary vitreous and hyaloid artery. This fissure fuses during the fifth and early sixth gestational week, enclosing the initial retinal axons as the optic nerve head.8 During the seventh gestational week, the margins of the optic cup grow around the anterior portion of the lens to form the ciliary body and epithelium of the iris.9 The lens and optic cup induce formation of the cornea, with its epithelium derived from surface ectoderm and its stroma and endothelium derived from mesenchyme.10

Using transvaginal ultrasonography, the eyes may be detected at 12 weeks gestation as hypoechogenic structures superolateral to the nasal bone. By 14 weeks gestation, the lens may be detected as an oval structure in the center of each orbit. It is characterized by a thin echogenic margin overlying an anechoic center. Additionally, the hyaloid artery can be detected in nearly all fetuses by 14 weeks gestation. This structure should disappear by approximately 29 weeks gestation (Figure 14.1). The eyelids may be identified at the beginning of the second trimester. The earliest reported gestational age at diagnosis of anomalies of the globe, orbit, and ocular adnexae by prenatal ultrasonography are given in Table 14.1. 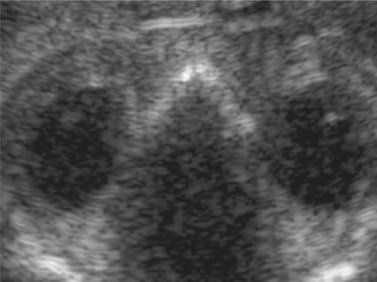 
Fetal magnetic resonance imaging (MRI) is currently accepted as a second line imaging modality in the examination of the normal and pathological fetal central nervous system and is also indicated when there is need to confirm or fully characterize a finding from fetal ultrasonography.11 Current software and hardware for fetal magnetic resonance imaging allow the acquisition of high-quality images of the globe and orbit (Figure 14.2). These images may be acquired in less than 1 second, thus permitting the performance of MRI without maternal or fetal sedation.2 However, while there is no evidence to suggest adverse effects of MRI on the fetus, the safety of MRI during pregnancy has not been proven. Therefore, the use of MRI during the first trimester of pregnancy is best avoided when possible.2 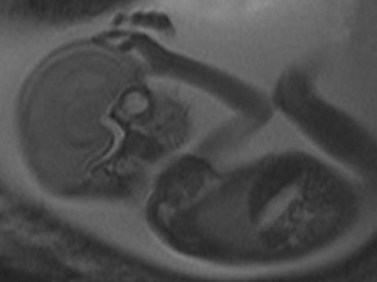 Computed tomography is not routinely used for prenatal diagnosis. Carcinogenesis in the fetus is a major concern, hence this imaging modality should be avoided in all trimesters of pregnancy unless absolutely necessary.12

True anophthalmia is the complete absence of the globe in the presence of ocular adnexae. However, the term “clinical anophthalmia” is sometimes used to reference extreme microphthalmia in which a small blind eye persists. Primary anophthalmia occurs when the eye never forms during gestation. This diagnosis is oftentimes associated with genetic syndromes or chromosomal anomalies. Secondary anophthalmia, on the other hand, is regression of the globe, usually by an insult during development. Potential etiologies of secondary anophthalmia include infectious, vascular, metabolic, or toxic events. In a review of 58 patients with congenital anophthalmia, Schittkowski and colleagues identified systemic findings in 50% of patients, predominantly Goldenhar’s syndrome, facial clefts, and cerebral anomalies.13 In this review, 18 of the 38 patients with unilateral anophthalmia had anomalies in the fellow eye, for the most part consisting of coloboma, dermoid, sclerocornea, and glaucoma.13

The gestational age at diagnosis in the reports ranged between 14 and 32 weeks (Chapter 19).14–20 Characteristic findings on ultrasonography included an absent or small orbit, an absent globe, and an absent lens (Figure 14.3). Of the three cases that were unilateral,16–18 two were associated with microphthalmia in the fellow eye.16,17 Systemic associations included anophthalmia-plus syndrome,19 Waardenburg-type ophthalmo-acromelic syndrome,20 otocephaly,16 limb body wall complex,17 and holoprosencephaly.15 A family history of anophthalmia was present in two cases14,19 and a maternal history of recurrent miscarriages was present in one case.18 Reported outcomes in pregnancies that were not terminated included stillbirth at 21 weeks gestation in the fetus with limb body wall complex,17 and death shortly after birth in the fetuses with ophthalmo-acromelic syndrome20 and otocephaly.16 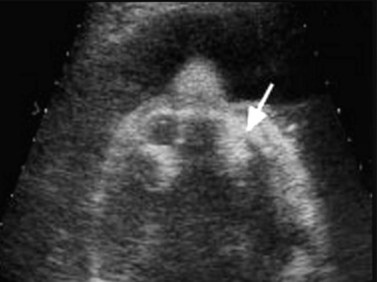 Microphthalmia refers to an abnormally small eye. Causes of microphthalmia include chromosomal abnormalities, craniofacial disorders, intrauterine infections, teratogens, and syndromic processes.21 It also may be inherited as an autosomal dominant, autosomal recessive, or X-linked trait.

Nomograms for ocular biometric measurements based on ultrasonography have been reported.22–25 Microphthalmia is considered when the ocular diameter is less than the 5th percentile for gestational age (Figure 14.4). However, Blazer has noted that normal ocular biometry in early pregnancy does not preclude the subsequent development of microphthalmia.26 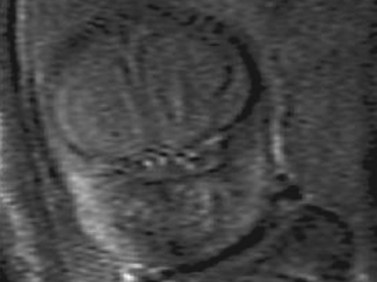 A coloboma of the globe is a congenital anomaly that develops secondary to failure of embryonic fissure closure. Those closure anomalies leading to optic nerve colobomas involve the posterior portion of the embryonic fissure at the optic cup (Chapter 13). Optic nerve colobomas may be isolated, but oftentimes occur with syndromic associations. For this reason, diagnosis of a coloboma may lead to further evaluation for syndromic conditions.28

Righini and colleagues reported three cases of optic nerve coloboma initially diagnosed with ultrasonography and confirmed with prenatal MRI (Figure 14.5).28 In this case series, MRI was determined a more effective imaging technique secondary to limitations of ultrasonography to illustrate details of the posterior globe. Ages at initial diagnosis ranged between 30 and 32 weeks. The coloboma was described as a focal bulging of the globe at the insertion of the optic nerve. Reported non-ocular associations included Aicardi’s syndrome, West’s syndrome, and CHARGE syndrome. 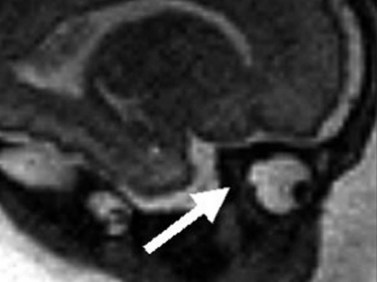 Cyclopia is a rare form of holoprosencephaly in which the embryonic prosencephalon fails to properly divide the orbits into two cavities, resulting in one orbit and eye. Holoprosencephaly ranges from severe alobar holoprosencephaly with cyclopia to ethmocephaly, cebocephaly, premaxillary agenesis, and various microforms. Causes include chromosomal aberrations, single gene mutations, and teratogens.35 An especially severe teratogen associated with this condition is cyclopamine, an alkaloid toxin found in the plant Veratrum californicum.

Several cases of cyclopia diagnosed by prenatal ultrasonography have been reported in the literature, with age at diagnosis ranging between 12 and 35 weeks. The diagnosis at 12 weeks was made by transvaginal ultrasonography in two of the cases.36,37 Characteristic ultrasonographic features include a single median orbit, or absence of one orbit (Figure 14.6