Other Imaging Techniques in Hypertrophic Cardiomyopathy

The distribution of hypertrophy and distortion of septal anatomy is different among patients with a clinical diagnosis of HCM made later in life compared with younger patients. HCM morphology can be classified into five main subtypes: sigmoid, reverse curve, apical, symmetric, and neutral (Fig. 12.2) [9, 10]. LV apical aneurysms could also be present in HCM and are frequently associated with a midventricular obstruction. They can be a substrate for life-threatening arrhythmias and location of intraventricular thrombi. Echocardiography is not always helpful in their visualization and Contrast-enhanced CMR demonstrates that they are composed predominantly of fibrosis [11]. 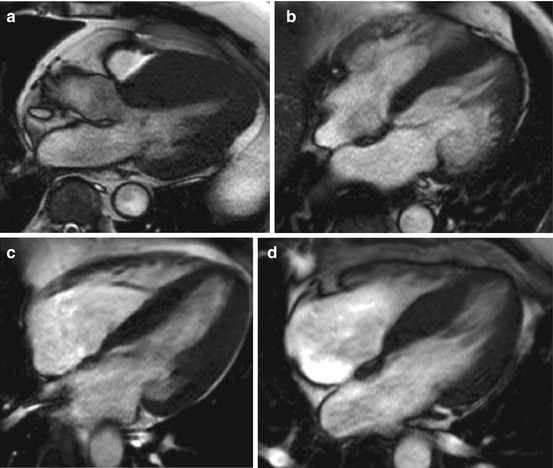 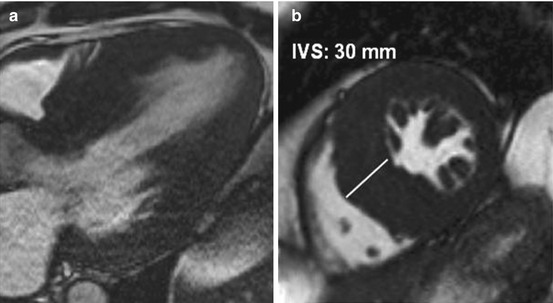 Cardiac magnetic resonance (CMR), three-chamber and short-axis view, of a 40-year-old man with severe hypertrophy. Interventricular septum (IVS) is measured at 30 mm
CMR is also helpful in defining the degree of hypertrophy, which in some cases is massive (Fig. 12.3), and of LV mass, overcoming the limitations of echocardiography [12]. As demonstrated by Olivotto et al. [13], LV mass index in HCM patients significantly exceeds that of control individuals. Interestingly, LV mass index assessed by CMR showed only a modest relationship to maximal LV thickness assessed at echocardiography.
The right ventricle (RV) is often not well visualized by echocardiography, whereas CMR provides optimal assessment of RV volume, systolic function, and wall thickness. According to Maron et al. [14], significant RV hypertrophy (end-diastolic RV free wall thickness ≥8 mm) could be demonstrated by CMR in more than one third of HCM patients. In a substantial proportion of patients, RV wall mass is also increased.
Microvascular dysfunction and subsequent ischemia may be present in HCM. As demonstrated by Petersen et al. [15], although resting myocardial blood flow is similar in HCM patients and healthy controls, during hyperemia, it is significantly lower in patients. In addition, this decrease in coronary reserve is related to the extent of LV hypertrophy.

CMR is helpful in the differential diagnosis between HCM and other pathologic conditions characterized by LV hypertrophy. In particular, hypertrophy pattern and LGE distribution—although heterogeneous in HCM—are often distinctive in other diseases mimicking HCM, such as some infiltrative/storage CMP [15–17] (Chap. 27).

CMR plays a role in assessing a particular patient subgroup within the HCM disease spectrum, i.e., genetically affected family members without clinical or morphologic evidence of disease. In this setting, CMR can recognize subtle abnormalities usually not detected by echocardiography [16]. One feature described in this subset of patients is the presence of myocardial crypts, characterized by small invaginations inside the myocardium [17] (Fig. 12.4). Another morphological characteristic observed to be different in comparison with a healthy control population is the presence of longer mitral leaflets [6]. Interestingly, the MV is often abnormal in patients with HCM, and it is possible that abnormalities in its structure could be a primary feature linked to genetic mutation(s) [18]. Valente et al. [19] analyzed 40 genotype-positive/phenotype-negative patients using echocardiography and CMR and found a quite good diagnostic agreement, although CMR measurements of LV wall thickness were 19 % lower than echo, and 10 % of cases had LV hypertrophy appreciated only by CMR. 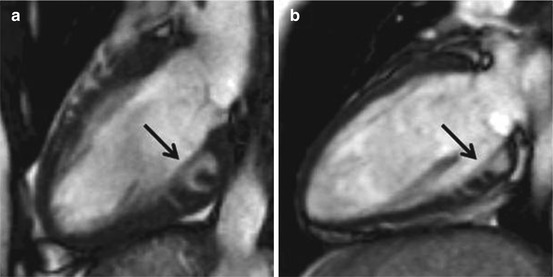 Cardiac magnetic resonance (CMR) two-chamber view of two young carriers—19 (a) and 20 (b) years—of known disease-causing mutations and overexpression of phenotypes. Note the presence of myocardial crypts at the inferior wall (black arrows)

Images acquired following the injection of gadolinium can help in detecting fibrosis in HCM, as in other heart diseases. The presence of myocardial fibrosis can be observed frequently in HCM hearts, and its presence is believed to be a pathological substrate for cardiac arrhythmias (Fig. 12.5). 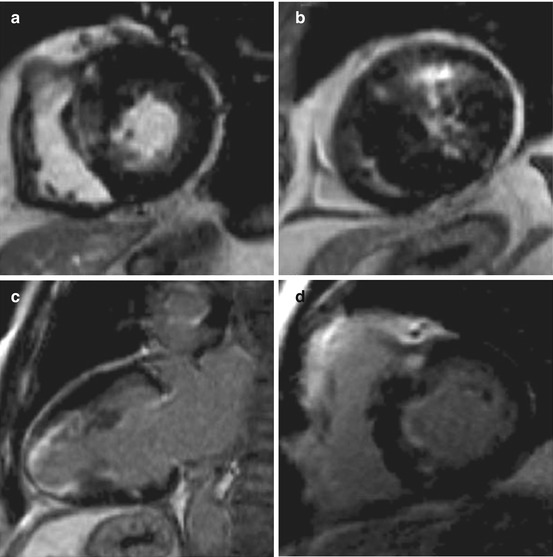 Different late gadolinium enhancement (LGE) patterns in hypertrophic cardiomyopathy (HCM). Patchy septal LGE (a) in a patient with severe asymmetric hypertrophy. Anterior and circumferential LGE in a patient with systolic obliteration (b). Apical LGE in apical HCM (c). Insertion point LGE (d) in a patient with mild hypertrophy
In the seminal study by Choudhury et al. [20], myocardial scarring visualized by LGE was a common finding in asymptomatic or mildly symptomatic HCM patients (81 %). Also, Moon et al. [21] described a high prevalence of LGE in patients with HCM (79 %). During follow-up, the extent of scar visualized by CMR was associated with progressive ventricular dilation and clinical markers of sudden death (SD). Adabag et al. [22] found that myocardial fibrosis assessed using LGE was associated with greater likelihood and increased frequency of ventricular tachyarrhythmias on ambulatory Holter electrocardiography (ECG). LGE was distributed in different patterns (most commonly within the interventricular septum or in the areas of most extensive hypertrophy) [23]. Extensive LGE was observed in end-stage HCM with significant systolic LV dysfunction. In general, LGE correlates with LV wall thickening and inversely correlates with LV ejection fraction (EF) [24].
Novel techniques for quantifying myocardial extracellular volume, such as T1 mapping, may be promising, particularly for assessing diffuse myocardial interstitial fibrosis in HCM [25]. To date, the roles of these techniques, especially concerning prognostic stratification or relationship with other features such as ventricular arrhythmias, remain undefined.
There is debate around whether genotype-positive/phenotype-negative HCM patients have myocardial fibrosis. Even if some case reports describe the presence of LGE in this condition [26, 27], there is a lack of data on this specific patient population. Moreover, it is possible that these patients may have subtle myocardial fibrosis not detected by LGE. Patients without overt LV hypertrophy and a genetic mutation have a higher myocardial extracellular volume expansion when assessed measuring T1 times pre- and postgadolinium infusion [28].

The usefulness of PET in patients with HCM was first reported by Grover-McKay et al. [48]. These authors demonstrated that the hypertrophied septum of patients with HCM is viable and not ischemic at rest, as it exhibits normal uptake of the fatty acid tracer 11C-palmitate and normal or only mildly reduced myocardial perfusion. However, it is metabolically different from normal myocardium, as it fails to take up the glucose analog [18F]-FDG despite normal uptake in the rest of the myocardium. Later studies confirmed this finding and demonstrated heterogeneity of [18F]-FDG uptake in hypertrophied segments, possibly reflecting a metabolic abnormality [49]. This heterogeneity was suggested to be related to regional systolic function [50] and was increased in patients with HCM diagnosed at a young age compared with patients diagnosed at middle to old age [51].
Studies using PET with [13N]-ammonia or [15O]-water to assess myocardial blood flow demonstrate that patients with HCM have a blunted response to the vasodilators dipyridamole and adenosine compared with normal controls or patients with secondary hypertrophy, thus suggesting microvascular dysfunction [52–56]. A direct increase in the number of cardiovascular events, including unfavorable LV remodeling, progressive HF, ventricular tachyarrhythmias, and death, was found with increasing coronary reserve impairment [54, 56]. A relationship between LGE CMR and heterogeneous resting myocardial blood flow [57] or microvascular function studied by stress PET were found [58]. Studies with 11C-12177 (CGP) or 11C-hydroxyephedrine (HED) PET demonstrated the presence of cardiac sympathetic dysinnervation: reduced β-adrenergic receptor density with reduced norepinephrine reuptake by presynaptic terminals [59, 60]. These abnormalities seem to be particularly prominent in patients with HF [61].

Cardiac CT has the advantage of clearly delineating the myocardium, thus providing detailed characterization of the HCM phenotype, including accurate wall thickness measurements, and highly reproducible measurements of ventricular volumes, EF, and mass [62, 63]. In addition, it permits simultaneous imaging of coronary arteries, RV and LV volume and mass, and global and regional function [64, 65]. However, this imaging method was not extensively studied in HCM patients and thus is useful only in selected clinical scenarios, following suboptimal echocardiographic images when CMR is contraindicated, or to exclude concomitant coronary disease (Table12.1).