In recent years, the frequency of diagnosing ovarian cysts in pre- and postmenopausal patients has increased. This can most likely be attributed to improvements in ultrasound technology and increased utilization of ultrasound in female patients.1 Most of these cysts are diagnosed as benign or functional based on their ultrasound characteristics (Fig. 17.1).2–4 In fact, Granberg et al5 observed that increased accuracy of ultrasound has allowed benign cysts to be identified reliably on ultrasound with only a 0.5% risk of malignancy. However, just because the ability of ultrasound to characterize an ovarian cyst has improved over the years, it must still be acknowledged that a benign cyst can still cause problems for patients. In the late 1980s, ovarian cysts were the fourth most common gynecologic cause of hospital admission in the United States.6 Most ovarian cysts are asymptomatic, but a small number of patients may present with pelvic pain. In many of these patients, the presence of a cyst can lead to significant anxiety about the possibility of malignancy, despite the fact many of these patients have sonographically benign cysts.3 For these reasons, treatment is often pursued for these patients. Even though many of these patients undergo laparoscopic or surgical resection of the cyst or the involved ovary, it has been suggested that this is overtreatment with considerable cost to patients and society and the risks often outweighing the benefits.1,7 Therefore, it is helpful and important to be able to offer a less invasive option for these patients, which is why some interventionalists have turned to ultrasound-guided aspiration of ovarian cysts. 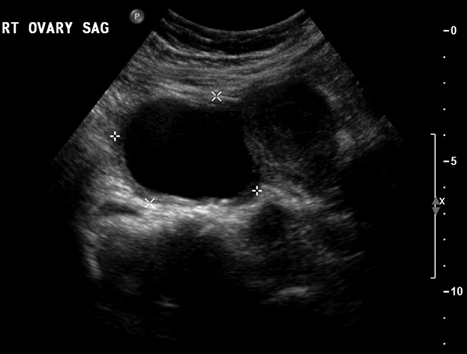 Before a patient with an ovarian cyst is considered for an ultrasound-guided aspiration, interventionalists must evaluate the patient thoroughly and exclude a malignancy prior to the procedure.8 In addition, the success of ultrasound-guided cyst aspiration depends on the criteria used for patient selection, which often include a combination of the patient’s symptoms, laboratory results (tumor markers such as CA-125 and CA 19/9), and imaging findings.5,8,9 The imaging evaluation prior to aspiration typically includes a pelvic ultrasound. Benign cysts tend to be unilocular and homogeneously anechoic with a uniformly thin wall; these are the cysts that can be considered for aspiration. Complex cysts may be multilocular and have wall thickening, septations, mural nodules, or internal echoes within the cyst cavity. Even though these cysts may be benign, there may still be too many questions regarding the etiology of the cyst to consider aspiration as primary treatment.10 Clinically, patients who are not ideal candidates for surgery, such as obese patients, those with a history of previous pelvic surgery, and those at high risk for anesthesia, may also be considered suitable candidates for ultrasound-guided aspiration.7

There have been several published studies evaluating the role of both transabdominal and transvaginal ultrasound-guided aspiration in the treatment of ovarian cysts (Fig. 17.2). One can review this data and interpret it to either support or dispute its use in this population of patients, depending on one’s individual perspective. For those that support the use of this procedure, there is data demonstrating symptomatic improvement and resolution of the cyst after aspiration. Those who do not recommend the use of this procedure cite the high rates of cyst recurrence after aspiration. Caspi et al11 evaluated ultrasound-guided simple ovarian cyst aspiration in 107 patients who were followed for a mean of 2.7 years. In 42 patients, cyst aspiration was definitive and in another 27 patients, the cyst recurred but was followed due to a size <5 cm. Therefore, 69 patients (65%) were able to avoid surgery after aspiration. Duke et al7 reported their results in 24 patients. Using conscious sedation, a 20 g needle was used to aspirate the cysts under transvaginal ultrasound guidance. In this population, there was a 75% recurrence rate with a mean follow-up of 39.5 months (which was longer than seen in other studies). Additional studies have reported recurrence rates ranging from 11.1 to 27.5%,12–15 but the maximum follow-up in all of these studies was 24 months. This data supports the observation that the likelihood of finding a recurrent cyst aspiration will increase with time. Both Duke et al and Weinrub et al found a higher incidence of recurrence when the cysts were left-sided, possibly due to the differences in venous drainage between the right and left ovaries.7,16 Bret et al10 reported their experience with transvaginal ultrasound aspiration of ovarian cysts in 48 patients. They found that some large cysts can cause acute symptoms due to their size. In these patients, aspiration was able to provide immediate symptomatic relief. This was also found by Caspi et al17 who found that there was immediate relief of pain in 18 patients with symptomatic ovarian cysts after aspiration. Balat et al found that 73% of patients remain free of symptoms during the follow-up period.15 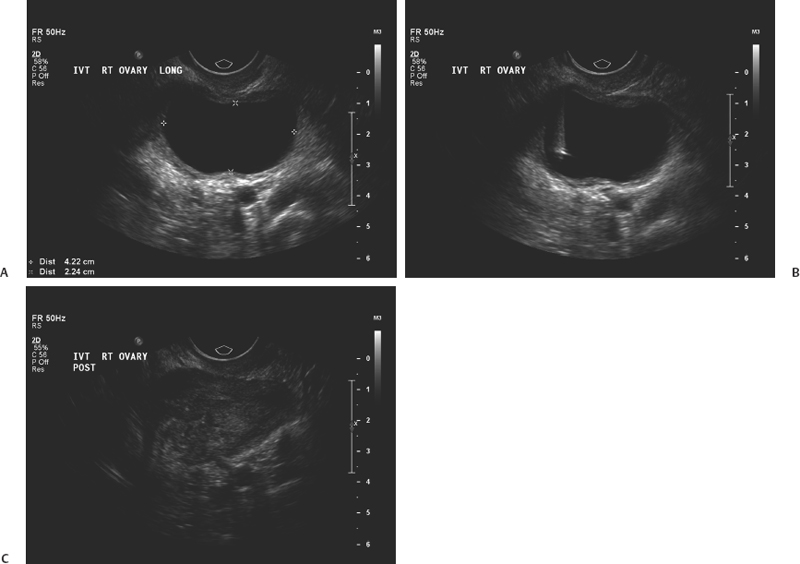 Fig. 17.2 Longitudinal images of a right ovarian cyst before (A), during (B), and after (C) transvaginal aspiration of this cyst. B demonstrates the needle within the cyst from a transvaginal approach.

Despite these results, the management of ovarian cysts within the gynecology community remains debatable with the potential benefits of aspiration challenged by other studies. Zanetta et al18 performed a prospective randomized trial on 278 patients with 143 assigned to simple observation and 135 patients assigned to ultrasound-guided aspiration. In this study, it was found that there was no superiority of aspiration over simple observation. In fact, spontaneous cyst resolution occurred in 45% of patients treated conservatively.18 Therefore, time alone may be enough to address the cysts in these patients, but unfortunately, this does not address the often acute need for treatment and the anxiety associated with this diagnosis.

Once aspiration is performed, it is mandatory to perform an evaluation of the cyst fluid to determine if a malignancy is present.8 An initial characterization of the fluid is important to make at the time of the aspiration. Patients need to be counseled that laparoscopy or exploratory laparotomy will be recommended if there is an abnormality of the cyst fluid, including the presence of mucus or blood within the aspirate.8,19,20 Following this initial gross evaluation of the fluid, samples must be sent for cytologic analysis. However, it has been established that cytology has a relative poor predictive value and low sensitivity for the diagnosis of an ovarian malignancy.7,18,21,22 This, together with the fear and risk of preoperative spill of malignant cells and its negative impact on survival,7,23 are the reasons why ultrasound-guided cyst aspiration remains controversial within the gynecology community.

Certainly, one possible solution to the problem of recurrence after aspiration is the injection of material into the cavity of the cyst. Different studies have been performed to evaluate several different agents to use in this setting. Mesogitis et al1 utilized methotrexate, which is a folate antagonist mentioned earlier in this text in the context of treating a cervical ectopic pregnancy. Methotrexate was felt to represent a good choice of material to inject because cells within endometriomas show a high mitotic index and may be addressed with the methotrexate.1 Thirty milligrams of methotrexate, diluted in 3 cc of normal saline, were injected into 122 patients with either a simple cyst or an endometrioma after transabdominal aspiration. Using this technique, resolution was seen in 84.6% of patients with a simple cyst and 83.6% of patients with an endometrioma.

Another possible solution for treating patients with endometriomas was described by Fisch and Sher in 2004.24 In this study, 32 infertile women with ovarian endometriomas were treated by sclerotherapy with tetracycline. Using a transvaginal approach, an 18 g needle was used to aspirate the endometrioma and the cyst cavity was flushed with normal saline until the aspirated fluid was clear. At this point, tetracycline 5% was injected into the cyst. The volume used was slightly less than the approximate volume of the endometrioma. Following injection of the tetracycline, sterile saline (100 to 300 cc) was injected into the cul-de-sac to minimize the potential for peritoneal irritation secondary to the tetracycline. In 75% of patients, the endometriomas were completely resolved at the 6-week follow-up. Eight patients had a residual simple cyst that required repeat aspiration. Two patients required an additional course of sclerotherapy.

Noma and Yoshida reported their experience with ethanol sclerotherapy of endometriomas.25