Pathology of Radiation Effects on Healthy Tissues in the Pelvis

After the cessation of radiation, in rats and humans, the mucosal epithelium reverts to normal in some individuals, while others can show atrophy, loss of goblet cells, and mild nuclear atypia. There may be persistent ulcers sometimes requiring surgical intervention [11]. The base of these ulcers will often have atypical fibroblasts and endothelial cells. The manner in which the epithelium relates to the rest of the organ may have changed as well; this “architectural” change, a consequence of healing of the ulcers seen in the acute phase, may take the form of dilated crypts displaced into the submucosa, and even at times between layers of the muscularis propria. This phenomenon in rats, coupled with the accompanying fibrosis, was termed “radiation-induced proctitis fibrosa cystica profunda” by Hubmann [12]. The equivalent lesion has been well described in humans [10]. Another, dramatic, architectural change that has been described is the presence of epithelium directly in contact with the muscularis propria with loss of intervening submucosa. Given that these architectural changes result from healing of the ulcers seen in the acute phase, it is reasonable to presume that the degree of these architectural changes depends on the severity of the acute-phase ulceration. There are also more generalized connective tissue changes in the long term: what had begun as edema and accumulation of mucin-like material in the submucosa transforms over time into hyaline fibrosis populated by occasional atypical fibroblasts (Fig. 5.2). As is true in all irradiated tissues, chronic changes in arteries, arterioles and veins, characterized by intimal fibrosis, accumulation of foam cells, loss of smooth muscle from muscular arteries, and luminal narrowing will supervene, accompanied by occasional atypical endothelial cells. These changes lead to vascular insufficiency and, in some cases, chronic ulcerations (Fig. 5.3). It has been argued that many of the changes ascribed directly to irradiation are more accurately considered a consequence of vascular insufficiency. Another vascular change is the development of vascular telangiectasias in the mucosa and submucosa; these dilated, tortuous vessels with stiff walls (see above) are delicate and prone to injury, leading to the sometimes persistent rectal bleeding in radiation proctopathy [13, 14]; a similar process is seen in the urinary bladder (see below). Fibrosis of the bowel wall, leading to stenosis and shortening, can be progressive and develop over a period of months to years. Because of this, patients may present with bowel obstruction after a long symptom-free period. Finally, though there has been some uncertainty as to the degree of risk for development of new malignancies in the irradiated rectum [15], one study showed a relative risk of 1.26 for rectal carcinoma in men who had been treated with external beam radiation for adenocarcinoma of the prostate as compared to those who had been treated with surgery alone [16]. Adenocarcinomas of the rectum induced by radiation, similar to adenocarcinomas that develop in a background of idiopathic inflammatory bowel disease , get their start as flat areas of dysplasia which may be difficult to detect endoscopically (Table 5.2) [17].

This high-power image is taken from a pseudopolyp in an irradiated rectum. Note the presence of atypical fibroblasts, mixed inflammation, and expansion of the lamina propria 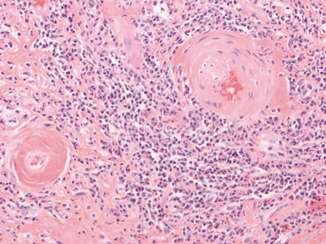 These blood vessels in an irradiated uterine cervix show the typical changes induced in such structures by radiation. Note the replacement of smooth muscle in the walls of these vessels by hyaline fibrosis and the luminal narrowing
Table 5.2

The interior lumena of the urinary bladder is lined by the urothelium, which is water and ion impermeable and has a low mitotic rate. These properties of the urothelium decrease its immediate sensitivity to radiation relative to the epithelium of the GI tract [15]. Because of this, the incidence of radiation cystitis is less than 10 % for patients given pelvic radiation for nonurinary malignancies. In those subjects that do develop radiation cystopathy, the earliest finding on endoscopic examination is transient erythema (during the first 24 h) [1]. Three to six weeks later, this is followed by edema, necrosis of basal urothelial cells, urothelial desquamation and hyperemia, as well as occasional shallow ulceration [1, 18]. Urothelial atrophy (thinning, with fewer layers of cells than normal) will often supervene, and the topmost layer of cells, the umbrella cells, may be lost. In consequence, the urothelium may lose its property of impermeability, which can lead to increased frequency of urination. Paradoxically, focal urothelial hyperplasia (an increased number of cell layers) and squamous metaplasia can develop alongside of urothelial atrophy. At this time, atypia will appear amongst urothelial cells, complicating interpretation of urine cytology in those patients being followed for urothelial malignancies. Over the long term, the radiated bladder may develop ulcers that may penetrate into the muscular wall. Replacement of the normal bladder wall muscle by collagen leads to rigidity and fibrosis of the bladder wall which leads to reduced capacity (and increased urinary frequency). Development of telangiectatic vessels contributes to persistent hematuria . All these effects of radiation may also manifest themselves in the distal ureters. However, the most important manifestation of ureteral exposure to radiation is fibrosis, which may lead to ureteral stenosis.
Urothelial hyperplasia noted above may lead to cellular atypia in the late period, and there is a risk for the development of urothelial tumors. In a rat model, at 20 months post index bladder irradiation, 10 of 17 rats had such tumors [18]. Also, the bladder is no exception to the general rule that irradiated tissues develop atypical fibroblasts; these may form lesions (“pseudosarcomas”) which must be differentiated from true neoplasms. Reactive epithelial proliferations may develop, incorporating benign radiation-induced atypia, that may be difficult to distinguish from true invasive carcinomas (Table 5.3) [19, 20].

The effects of radiation on the prostate gland include glandular atrophy, squamous metaplasia, and cytological atypia amongst the epithelial elements while the stroma will show fibrosis and rare atypical fibroblasts [21]. Over time, arterial structures within the irradiated prostate will show myointimal proliferation and luminal narrowing, as seen in other organs under these conditions. While these radiation-induced changes in the prostate gland are of uncertain, if any, clinical significance, radiation-induced changes in adjacent tissues have more concrete implications. Radiation-induced changes in the arteries of the proximal penis (apoptosis of smooth muscle cells, replacement of smooth muscle by collagen) were seen to occur in the rat model developed for the study of prostate radiation-induced erectile dysfunction [22]. In another rat study, a decrease in the numbers of nitric oxide synthase-containing nerve fibers in the rat penis was documented [23].

Animal models have contributed little to our understanding of the effects of radiation of the ovaries in humans [15]. Rather, this endeavor has largely been advanced by the careful examination of ovaries in juvenile and adult females either intentionally or unintentionally exposed to radiation, coupled with an understanding of ovarian physiology and microanatomy. These studies have included an examination of the ovaries in a 13-year-old victim of the atomic explosion over Hiroshima, who succumbed 2 weeks after the event. Unlike other organs, the most radiosensitive cells in the ovary are not epithelial cells since there are none to speak of in the normal, postfetal ovary. Instead, the most radiosensitive cells in the ovary are the oocyte-supporting, mitotically active granulosa cells which surround the oocyte in the maturing ovarian follicle [15, 24, 25]. The oocytes themselves are relatively radioresistant after birth, because they are in a resting phase (meiosis). In fact, in childhood and throughout the age of reproduction, most follicles in the ovary are present as relatively inert primary follicles. During the age of reproduction (and, in a less organized manner, during childhood), during each menstrual period a cohort of primary follicles undergo maturation; this process includes the proliferation of the previously mitotically inactive granulosa cells [23]. It is during this time of mitotic activity that the granulosa cells are most radiosensitive, and will succumb within hours of a radiation exposure. The continued viability of the oocyte requires a healthy granulosa cell layer. Once the loss of granulosa cells reaches a certain threshold, there will be loss of the oocyte and atrophy of the follicle. Primary follicles, for the reasons given above, are more radioresistant than maturing follicles, but they will succumb to sufficiently strong doses of radiation. Ovaries studied months after radiation exposure demonstrate fibrosis of the cortex, absence of follicles and oocytes, and generalized atrophy (Fig. 5.4). The vascular changes and atypical fibroblasts typical of radiation injury may be seen in the ovary as well. The clinical manifestations of these radiation-induced changes may include sterility (either permanent or temporary), early onset of menopause, and loss of libido. In children, there may be failure to develop secondary sexual features. In regards to the risk for radiation-induced neoplasia, though there are anecdotal reports of malignancies arising in the previously healthy irradiated ovary [5, 26], there are at most slightly more than the expected number of ovarian tumors in patients status postradiation therapy [15]. 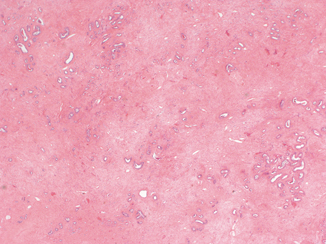 Tags: Radiation Therapy for Pelvic Malignancy and its Consequences
Apr 7, 2017 | Posted by admin in GENERAL RADIOLOGY | Comments Off on Pathology of Radiation Effects on Healthy Tissues in the Pelvis
Premium Wordpress Themes by UFO Themes
WordPress theme by UFO themes