Up to 90% of pulmonary emboli arise from the deep veins of the lower extremities.6 Risk factors for venous thrombosis and pulmonary emboli include immobilization, prior history of thromboembolic disease, recent surgery or trauma, pregnancy, use of oral contraceptives, advanced age, cancer, and the presence of a hypercoagulable state. The initial clinical findings of pulmonary embolism are often nonspecific and include dyspnea, cough, fever, chest pain, and hemoptysis. Massive pulmonary embolism may result in cardiogenic shock. It is difficult to diagnose pulmonary embolism clinically because the symptoms may mimic other conditions, such as myocardial infarction, congestive heart failure, and pneumonia.

Pulmonary arteriography has high sensitivity and specificity in the diagnosis of pulmonary embolism in addition to being a safe procedure. The incidence of minor complications ranges from 1 to 5%. Complications include contrast reaction, transient renal dysfunction, access site hematoma, arrhythmia, and respiratory distress. Cardiac perforation is rare when pigtail catheters are used. The incidence of major complications has been reported to be less than 1%.7,8

The primary angiographic signs of pulmonary embolism include an intravascular filling defect (Fig. 15-1) and an abrupt vessel cutoff (Fig. 15-2). Overlying vessels must not be confused to be filling defects. Occasionally, a small branch is occluded flush with the origin of the vessel, which makes detection difficult. Secondary angiographic findings of pulmonary embolism include parenchymal staining, decreased perfusion, crowded vessels, delayed venous return from the affected area, pruning of vessels, slow flow, and shunting away from the involved lung.

Pulmonary artery catheterization most commonly is performed by the transfemoral route, but it can be performed from an upper-extremity vein or internal jugular vein approach. When using the common femoral vein approach, an iliac and inferior venacavogram is performed to exclude the presence of thrombus before the catheter is advanced into the right atrium.

Catheters used for pulmonary arteriography typically have a pigtail tip to resist catheter recoil and multiple side holes to allow for rapid contrast injection. End-hole catheters have been known to cause myocardial injury and pericardial extravasation through recoil and jet effect. The Grollman-type pigtail catheter has good torque control and is angled at the distal shaft that facilitates catheter passage through the tricuspid valve and right ventricular outflow tract (Fig. 15–3). After the right ventricle is entered, the catheter is rotated to direct the tip toward the pulmonic valve. The catheter then is advanced into the pulmonary artery. An alternative method uses a standard pigtail catheter and a tip-deflecting guidewire to angle the distal shaft of the catheter. 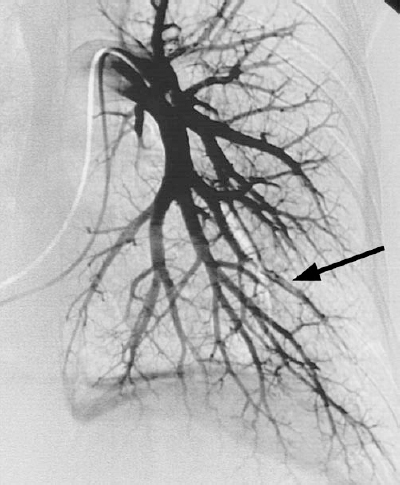 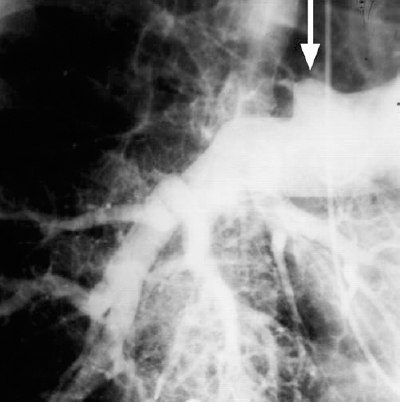 The patient’s electrocardiogram must be monitored continuously for the occurrence of induced ventricular ectopic beats during catheter manipulations within the cardiac chambers. Catheter-induced ventricular tachycardia usually can be reversed by immediately withdrawing the catheter. Rarely, intravenous administration of lidocaine or electroversion may be required. If left bundle-branch conduction block is present, there is a risk of inducing total heart block during catheterization, and a temporary cardiac pacemaker should be placed before the catheter is introduced into the pulmonary artery. Pulmonary artery pressure can be measured using the diagnostic catheter. Some interventionalists recommend decreasing the contrast injection rate and volume in patients with a pulmonary artery systolic pressure greater than 40 mm Hg; however, no relationship between administered contrast dose and complications in patients with pulmonary hypertension has been demonstrated.11

A technically adequate pulmonary arteriogram to exclude the presence of pulmonary embolus requires selective catheterization of the right and left pulmonary arteries, with imaging in at least the frontal and one oblique projection. The ipsilateral posterior oblique view tends to produce the least amount of vascular overlap, especially of the lower lobes (Fig. 15-4). If any injection demonstrates embolus, the examination usually can be stopped. 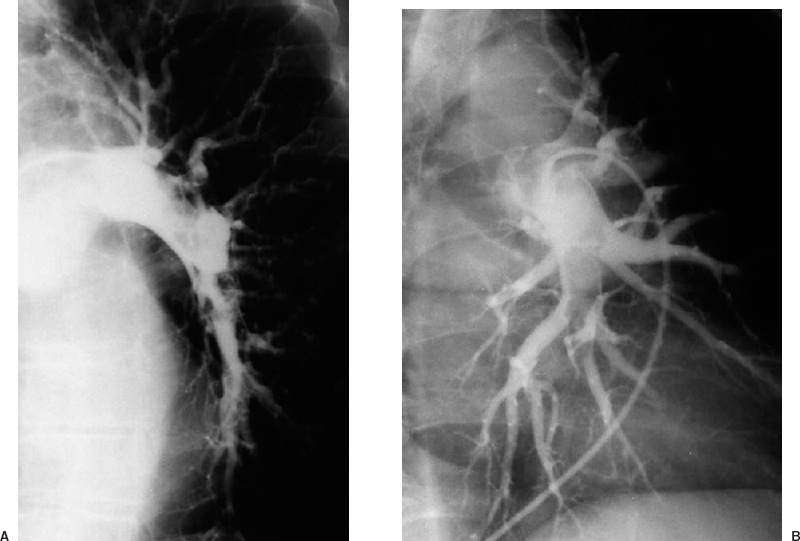