Definition: Fatal skeletal dysplasia with a marked shortening of the torso and extremities and a comparatively large head.

Origin: In isolated cases, a defect in synthesis of collagen type II has been proved.

Ultrasound findings: There are various forms of achondrogenesis (type I and type II). Severe shortening of the extremities, a narrow thorax and reduced ossification of the vertebral column and the skull are characteristic features. In some cases, hygroma colli or fetal hydrops may also be present. Thickening of the soft tissue of the arms is typically seen. Ascites and fetal hydrops may also develop. The abdomen and head are very large compared to the chest and the limbs. In contrast to osteogenesis imperfecta, the skull is not compressible, and fractures of the long bones are not a feature; fractures of the ribs may sometimes be seen. The diagnosis is possible as early as 12 weeks of gestation, due to the appearance of a thickened nuchal fold (nuchal swelling) and skeletal malformations.

Clinical management: Molecular-genetic diagnosis, further ultrasound screening including fetal echocardiography. In cases of achondrogenesis, cardiac anomalies are seen rarely in comparison with other skeletal disorders. Radiographic examination of the skeletal system leads to further confirmation. Termination of pregnancy has to be considered, as the outcome is fatal. Management of the pregnancy and labor should not be influenced by fetal distress.

Procedure after birth: As the fetus is not viable, intensive medical interventions are not recommended.

Prognosis: Intrauterine fetal death usually occurs, resulting in stillbirth; if not, then death occurs within 24 h after birth due to hypoplasia of the lungs.

Definition: This is the most frequent heterozygous, nonfatal type of skeletal dysplasia (the homozygous form is fatal), with severe shortening of the limbs and a large head (dwarfism). Adult height: 116– 140 cm.

Pathogenesis: Reduced chondral ossification. Mutation of the fibroblast growth factor receptor. In the homozygous form, early manifestation and fatal outcome. In the heterozygous form, a normal ultrasound appearance is possible up to 20 weeks.

Ultrasound findings: Disproportionate hyposomia (dwarfism) with short limbs, large head, and a typical facial profile—protruding forehead (also known as frontal bossing) and flattened nasal bridge. The shortening of the bones of the extremities is apparent in the second half of pregnancy. The measurement of the long bones lies well below the fifth percentile, with accentuation of the proximal part. The hands and feet appear short and stubby. Hydramnios develops in the last trimester. The diagnosis is made with certainty after 24 weeks of gestation, the most reliable quotient being femur length to biparietal diameter, as the femur is often only minimally shortened, but the head is typically very large (macrocrania). In some cases, ventriculomegaly is also observed.

Clinical management: Further ultrasound screening including fetal echocardiography, karyotyping, molecular-genetic diagnosis. There is a danger of cervical column compression due to narrowing of the foramen magnum. Thus, any clinical intervention that may cause manipulation in the neck region during labor and delivery, such as forceps or vacuum extraction, poses a high risk of complications. For this reason, a cesarean section may be an option for delivery. 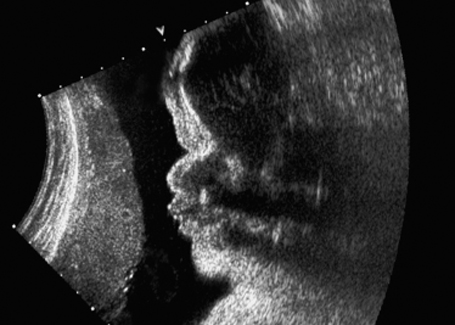 Procedure after birth: Radiography of the skeletal system confirms the diagnosis. Hydrocephalus may develop secondary to occlusion of the foramen magnum. Surgical techniques involving lengthening of the bones of the extremities can lead to an increase in body height of about 20 to 25 cm.

Prognosis: Life expectancy in these children is normal. Intelligence is not restricted. Neurological complications, especially involving the cervical spine, are common. In homozygous cases (both parents affected), the outcome is fatal—stillbirth or neonatal death resulting from hypoplasia of the lungs.

Definition: Asymmetrical disruptive anomalies, with amputated limbs and splitting defects such as ventral wall defects. The cause is thought to be amniotic bands resulting from premature rupture of the amnion.

Teratogens: None are known with any certainty. Smoking during pregnancy has been discussed as a possible teratogen.

Pathogenesis: The extent of malformations depends on the time at which the disturbances occur. Thus, anencephaly, encephalocele, facial clefts, abdominal wall defects and ectopia cordis may result. Later disturbance causes amputation of extremities and fusion of fingers, as in syndactyly.

Ultrasound findings: The findings are extremely variable, affecting many fetal structures. In mild forms, isolated fingers or toes may be missing. Club feet and malposition of the hands may be seen. Localized swellings of the distal parts of the limbs have also been observed (“constriction ring”). On scanning, amniotic bands can be detected in the amniotic cavity. Amniotic bands have to be differentiated from adhesions within the uterine cavity, which may also have connections to the amniotic cavity and are covered with amnion and chorion. These are often a result of curettage, but are not responsible for fetal malformations. In addition to malformations of the limbs, other severe defects are observed in amniotic band syndrome: abdominal wall defects, encephalocele, facial clefts, micrognathia, multiple anomalies of body surface (limb–body stalk anomaly, probably related in its pathogenesis to amniotic band syndrome).

Prognosis: This depends on the severity of the malformations.

Definition: This is a heterogeneous group of disorders all of which have multiple joint contractures present at birth. These may be caused by connective-tissue, muscular, or neurological abnormalities.

Clinical history/genetics: Autosomal-dominant, autosomal-recessive or X-linked inheritance have all been observed. The distal forms are more likely to occur in families, but sporadic occurrence is also possible.

Classification and ultrasound finding: The classification of arthrogryposis is still disputed. A primary condition is known, in addition to secondary, symptomatic disorders (of neuromuscular or central nervous system origin, mainly due to infections). Three basic forms of arthrogryposis are identified: 1, only the extremities are affected; 2, a generalized neuromuscular disorder is present; 3, the central nervous system is involved. The limbs are typically fixed in a certain position; the legs may be stretched or bent, the arms are bent. “Clenched fists” may be observed. The feet are stretched or appear clubbed. Hypoplasia of muscular tissue is evident. Fetal movement is restricted or totally absent. Swelling of the limbs is an accompanying feature. In some cases, the disorder first becomes evident as late as in the third trimester. Hydramnios is seen frequently. In 10% of the cases, anomalies of the central nervous system such as agenesis of the corpus callosum, lissencephaly, ventriculomegaly, or aplasia of the cerebellar vermis are associated. 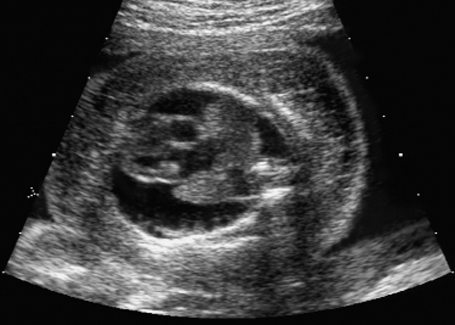 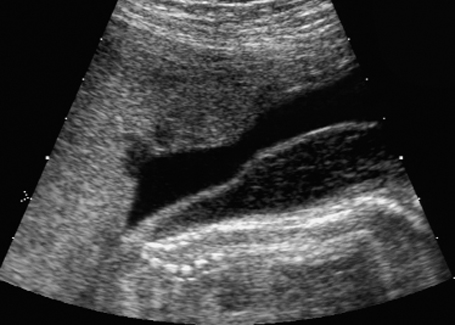 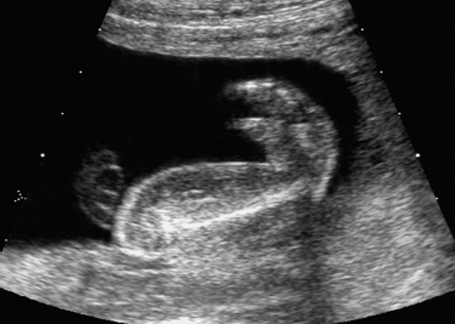 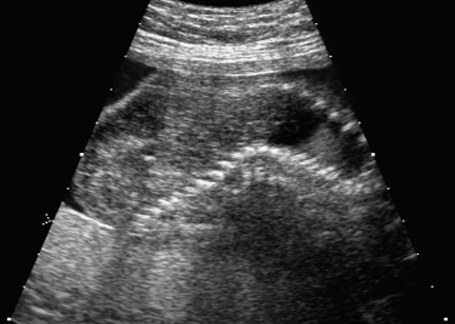 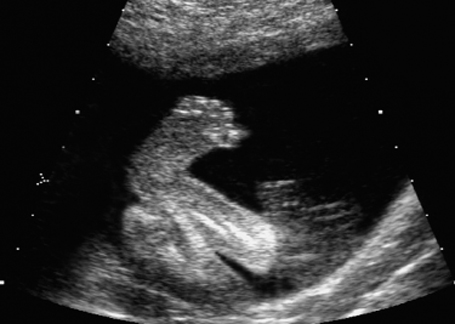 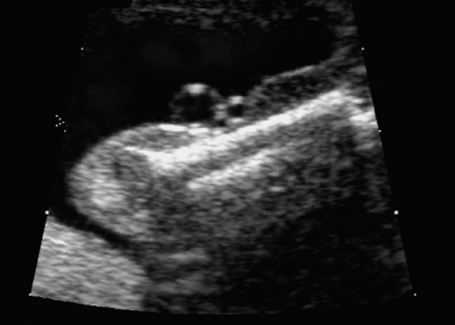 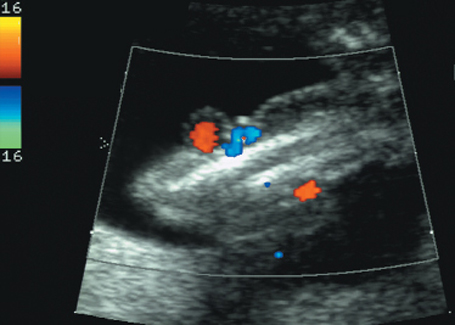 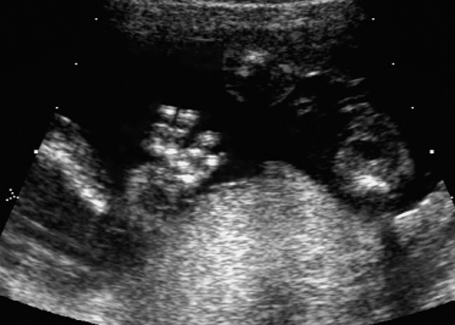 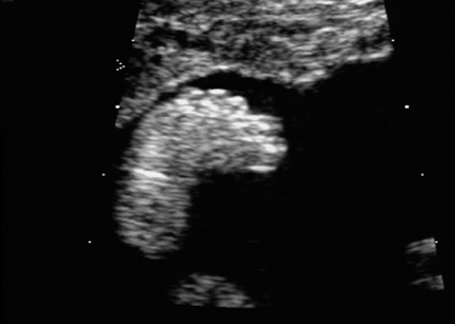 Clinical management: Further ultrasound screening, including fetal echocardiography and karyotyping. Search for infections (TORCH). A fixed breech position presents frequently, which may lead to complications during labor and delivery.

Procedure after birth: This is determined after an exact diagnosis is made.

Prognosis: This depends on the associated malformations and the severity of the disorder and can vary from a fatal outcome to minimal orthopedic handicap.

Description: Connects families affected by arthrogryposis with each other for mutual support and sharing of information. Educates medical and social-service professionals. Semiannual newsletter $10/year.