Abnormal Shape of the Head

Definition: Brachycephaly: the head ratio (biparietal diameter/frontal occipital diameter, BPD/FOD) is above the 95th percentile; for example, head ratio >0.88, depending on the method of measurement.

Incidence: As defined above, this applies to about 5% of all fetuses.

Ultrasound findings: The horizontal cross-section shows a round shape, with the BPD being relatively large compared to the FOD. 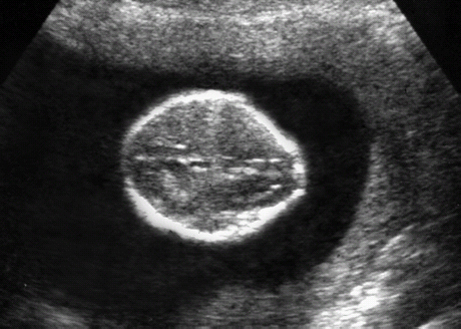 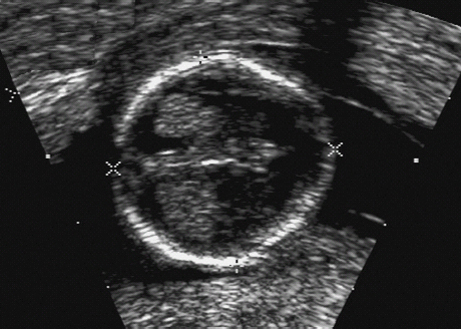 Caution: Following some initial euphoria regarding the use of this ratio to detect Down syndrome, large studies have since shown that there is a normal biological variation in head size and that potential measurement inaccuracies may lead to incorrect conclusions. The ratio has therefore lost its importance as a soft marker for detecting chromosomal disorders. When brachycephaly is found, the examiner should be alerted to other possible malformations. The head ratio should not be commented on in relation to chromosomal disorders, as this may cause unnecessary anxiety for the parents.

Definition: A connection between the fourth ventricle and the cisterna magna is a normal finding up to 18 weeks of gestation; thereafter, this diagnosis is applicable. It is advisable to determine the chromosome set, as an association with a chromosomal disorder is frequent. Detailed ultrasound screening should also be carried out to detect other malformations. The boundary to Dandy–Walker syndrome is hazy.

Ultrasound findings: A small, slit-like connection is detected between the fourth ventricle and the cisterna magna, without widening of the latter. This finding distinguishes the Dandy–Walker variant from the Dandy–Walker syndrome. False–positive as well as false-negative findings can be produced by inaccurate ultrasound scanning in the wrong plane.

Caution: At 13 weeks of gestation, Dandy–Walker variant is almost always detectable, and is considered to be a normal finding up to 18 weeks.

Prognosis: This may be a harmless finding with a good prognosis, or may be associated with other syndromes with a poor prognosis.

Definition: Increased echogenicity of the bowel in the second trimester, such that it is equal to that of surrounding fetal bone. The most frequent cause is intra-amniotic bleeding. The echogenicity is a soft marker for chromosomal anomaly, especially for Down syndrome. In the third trimester, bowel containing echogenic meconium is a normal finding.

Incidence: 0.6% of all fetuses in the second trimester.

Ultrasound findings: Loops of the bowel show a strong echogenic content. Weak echo can be excluded by reducing the overall density of the ultrasound picture. At the lowest level of reduction, only the bones and the echogenic bowel can be demonstrated if their echogenicity is similar.

Differential diagnosis: The differential diagnosis in these findings can be clarified from the study by Yaron et al., who investigated 79 cases of echogenic bowel. No cause was found in 30 cases (38%); intra-amniotic bleeding was the cause in 19% (n = 15); other anomalies were associated in 8% (n = 7); seven fetuses were affected in multiple pregnancies; and five (6.3%) showed bowel obstruction without cystic fibrosis. Chromosomal aberrations were found in five cases, and in a further five cases, intrauterine infection was the cause. Cystic fibrosis was diagnosed in only two cases (2.5%). Three fetuses (3.8%) were stillborn without any obvious cause. Hogge et al. reported two cases of cystic fibrosis in four detected cases. 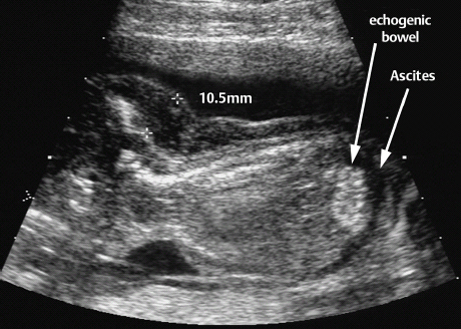 Fig. 10.3 Echogenic bowel. The scan shows echogenic bowel as well as ascites and hygroma colli in a fetus with trisomy 21. 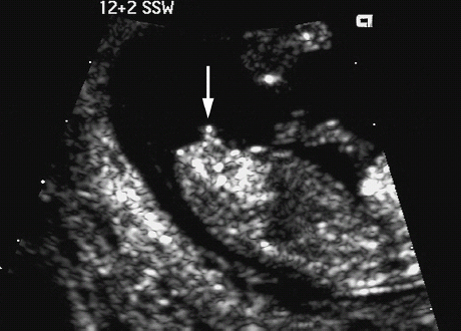 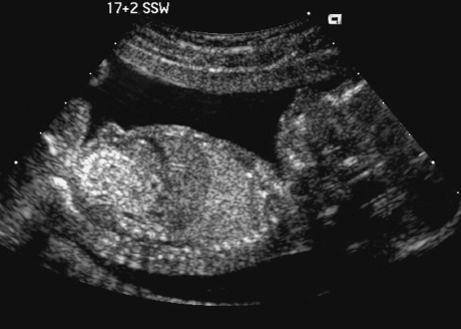 Clinical management: Further ultrasound screening, including fetal echocardiography, karyotyping, TORCH serology, exclusion of cystic fibrosis (frequency 2–3%). Pregnancy should be followed up closely, using Doppler monitoring, as there is a high risk of stillbirth.

Definition and clinical significance: The kidneys are more echogenic than the liver. This may be a normal finding, or may be the first sign of nephrotic syndrome or other renal anomalies. A case associated with cytomegalovirus infection has been reported. Benacerraf published 19 cases, in which there was a normal postnatal outcome in only four (21 %). Five (26%) died and had either infantile polycystic kidneys or multicystic renal dysplasia. In two cases, oligohydramnios only developed after 24 weeks; in one case, partial trisomy 10 was found.

Ultrasound findings: The volume of the kidneys is increased (above the 95th percentile), with a high echogenicity. If the renal function is affected, oligohydramnios or anhydramnios are found and the bladder is hardly filled. In some cases, oligohydramnios may even be detected at 15 weeks.

Prognosis: The decisive prognostic criterion is renal function, determined by the extent of amniotic fluid. Cases of severe oligohydramnios have a poor outcome. 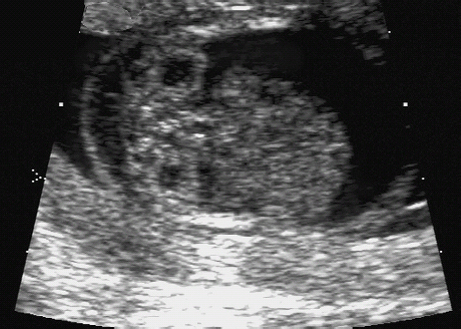 Fig. 10.6 Echogenic kidneys. Dilation of the renal pelvis and fetal ascites in a fetus with trisomy 9.

Definition: The upper limit of the width of the posterior horn of lateral cerebral ventricle lies at 8–10 mm. Dilation of the posterior horn above 10 mm is definitely a pathological finding. Mild ventriculomegaly is regarded as a soft marker for chromosomal aberrations. It may be a harmless finding, or may be the earliest sign of a developing hydrocephalus.

Ultrasound findings: The posterior horns of the lateral ventricles (the first and second ventricles) can be well detected and measured behind the choroid plexus. As defined above, one differentiates between the marginal form (8–10 mm) and pathological form (>10 mm) of ventriculomegaly. Asymmetrical dilation of the ventricles is a common finding. On scanning, the ventricle lying nearest to the transducer is difficult to measure, due to loss of scanning intensity immediately behind the skull bone. However, by changing the plane of the transducer and thus altering the angle, it is almost always possible to demonstrate it, especially in the second trimester. 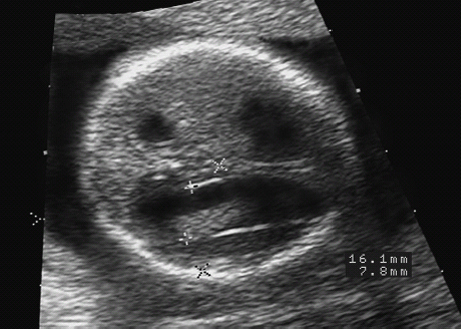 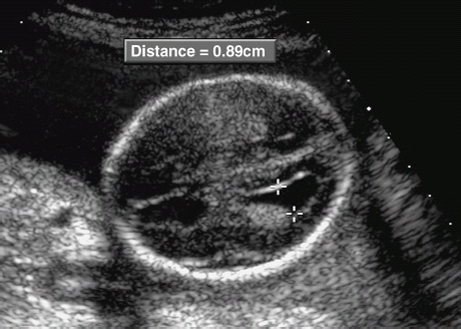 Fig. 10.8 Mild ventriculomegaly. The width of the posterior horn of the left lateral ventricle is 8.9 mm, without pathology.

Procedure after birth: The finding should be confirmed by transfontanelle scanning of the neonate’s skull. The plane of measurement used in prenatal scanning is not always reproducible after birth, so that confirmation of the diagnosis after birth is often difficult.