There is huge range in stellate block success rates described in the literature (16–100 %) [12].
Seemingly, using some sort of guidance improves block success, but in practice, there continues to be debate on whether to use guidance and what sort of guidance should be used.
While CT guidance provides a very high success rate [13], there is the associated higher dose radiation and the typical inefficiencies and cost associated with CT which makes it less popular.
Ultrasound can be used to easily visualize superficial soft tissue structures including the stellate ganglion [14]. Also, the longus capitis muscle has been described as a possible landmark for cervical sympathetic block [15]. In this chapter, we describe the most commonly used surface landmark, ultrasound- and fluoroscopic-guided techniques. The techniques for CT-guided blocks are virtually identical to the fluoroscopic techniques.
Minimum requirements for stellate ganglion blocks:

The “blind” or non-guided techniques rely on the use of palpable surface landmarks to determine the site of injection. Typically, the patient is placed supine with slight neck extension using towels +/− a shoulder roll with the mouth open (an open mouth results in more relaxed neck musculature). The cricoid cartilage in the adult is a fairly accurate landmark to identify the C6 spinal level. Others have advocated using the skin crease caudad to the thyroid as a landmark to identify C6. Chassaignac’s tubercle is identified with palpation at the C6 level. In most individuals, the tubercle is located approximately 3 cm cephalad to the sternoclavicular joint at the medial border of the sternocleidomastoid muscle. The carotid artery and trachea are gently retracted laterally. After intradermal local anesthetic injection with a 27-G needle, either 22- or 25-gauge Quincke or pencil-point needle is placed perpendicularly in an anterior-to-posterior fashion until the needle contacts bone at which point it is withdrawn 2 mm. After negative aspiration, 0.5–1 ml of 1 % lidocaine is injected slowly while the patient is awake and responsive to detect aberrant spread of the local anesthetic to surrounding structures. If negative, 5–8 ml of either 1 % lidocaine or 0.25 % bupivacaine is injected incrementally and frequent aspiration. The patient is then monitored for a minimum of 30 min to assess response to the blockade.

Positioning is unchanged from the blind procedure. The “C-arm” is then moved to achieve a posterior-anterior (PA) image. Then, using cephalad or caudad tilt, the end plates or C6 (or C7) are lined up. Either level can be utilized so long as the operator has thorough knowledge of the anatomy described in the previous section. The C7 level is preferred because of its closer proximity to the stellate ganglion, but the vertebral artery is uncovered at this level unlike at the C6 level where the vertebral artery travels posterior to Chassaignac’s tubercle. To avoid the vertebral artery at C7, the needle should be placed more medial on the transverse process (see Fig. 14.1). 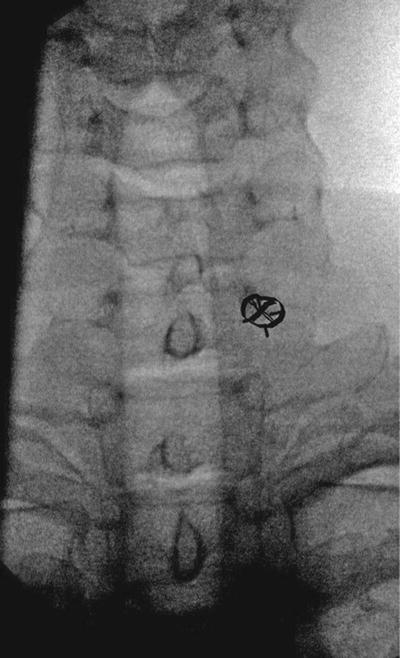 Initial landmark (x) for the anterior approach to the stellate ganglion block
Local anesthetic is infiltrated with a 27-gauge needle intradermally at the site of injection as guided by the fluoroscope. Then, a 25-gauge by 1.5- or 2-in. needle is advanced coaxially to the anterior transverse process of the chosen level. Once contact is made, the needle is withdrawn 2 mm so that it is not in contact with periosteum and the stylet is removed. A lateral image can be taken to confirm that the needle is anterior to the vertebral body. A precontrast-flushed extension set is then connected to the needle, and after negative aspiration for blood, under live, real-time fluoroscopy or digital subtraction angiography, 1–5 ml of contrast is injected. The optimal spread of contrast should cover the C6–T2 levels to ensure blockade of the stellate ganglion (see Fig. 14.2). A test dose is then injected with 0.5–1 ml of 1 % lidocaine through the extension tubing (to minimize needle movement) assuring that the local anesthetic passes through the tubing. The patient is continuously assessed for possible intravascular or neuraxial spread which can result in seizure or high spinal. 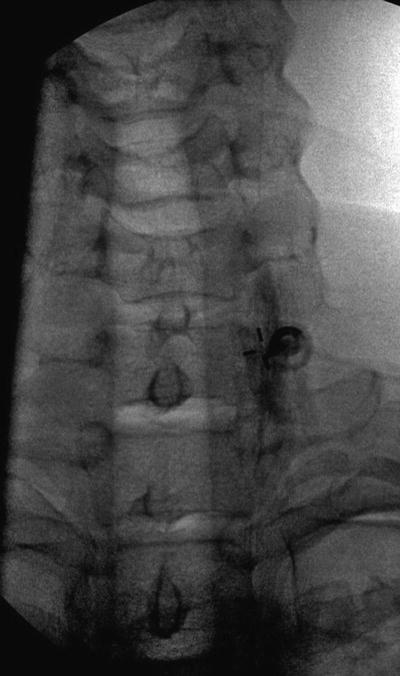 Injection of contrast after needle placement demonstrating correct spread along the anterolateral borders of C5–T1
If the test dose is negative, then approximately 5–10 ml of local anesthetic is injected incrementally. The greater the volume injected, the greater is the likelihood of spread to the recurrent laryngeal nerve, phrenic nerve, or brachial plexus. It is important to frequently aspirate during the injection and pause between boluses of injectate.

Patient preparation is unchanged with the patient placed in the supine position with established IV access. The head is then turned contralateral to the side to be blocked. The fluoroscope is used to identify the C5–C6 disk on AP view, and ipsilateral oblique rotation is added until the neural foramina are clearly demarcated. On this image, the target of the injection is the junction of the uncinate process and the vertebral body of C7. A 25-gauge needle is then passed coaxially with the fluoroscope beam until it reaches the target. As with all image-guided procedures, it is important to keep the needle coaxial and, in this case, avoid the needle going posterior into the foramina (direct entry into the thecal sac). Once contact with bone occurs, the stylet is removed and contrast is injected as described above in the previous section. The major reported advantage of this technique is that only 3–5 ml of local anesthetic is needed to block the stellate ganglion as opposed to the other techniques described which use as much as 15–20 ml. Another advantage of the technique is that the needle is placed obliquely to allow for placement at C7 while avoiding the vertebral artery (which is anterior to the stellate ganglion) and the pleural dome in nonemphysematous patients (based on cadaver studies).
The authors outlined the following benefits [16]:

There is currently no prospective outcome data on this technique. 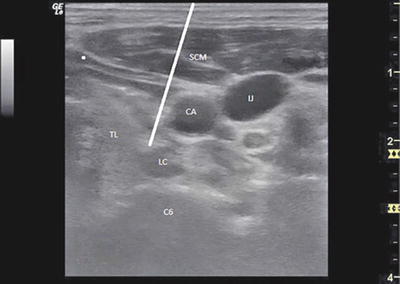 Ultrasound-guided approach to stellate ganglion block done at C6 level. TL thyroid lobule, LC longus colli muscle, CA carotid artery, IJ internal jugular vein, SCM sternocleidomastoid muscle
Positioning for the procedure is unchanged from the landmark-based technique. This block is considered an “expert” block by most ultrasonographers and should not be done by ultrasound beginners. A linear array, 3–12 MHz frequency probe (ideally with a small footprint) is placed transversely at the level of C6, just lateral to the trachea on the ipsilateral side. The carotid artery is easily visible with the use of ultrasound and can be a very good landmark. While some practitioners are performing exclusively ultrasound-guided blocks, many still use fluoroscopy to identify the C6 level, to verify what structures the needle is traversing, and to perform a live dye study. Sometimes, the ganglion itself can be visualized, but typically the goal is to use an in-plane approach and deposit medication in the fascial plane anterior to the longus colli muscle (which is almost always easily identified). Typically, small aliquots of 1–3 ml are injected under real-time visualization to verify a fill pattern in the appropriate fascial plane.
One validation study using the ultrasound approach showed that at the C6 level, the cervical sympathetic trunk lays entirely subfascially, and as a result, a subfascial injection via the lateral approach ensures reliable spread of solution to the stellate ganglion [14]. There are no randomized, prospective, outcome studies on using the ultrasound approach. One safety concern with ultrasound-guided injection is that there are no well-studied and validated contrast materials which can be used to insure that the injection is not intravascular. Still, one can use epinephrine to increase sensitivity, and others have reported a “wisping” in a visualized vessel when the injectate is intravascular.

Currently, the posterior approach is used principally when [1] a sympathectomy was not achieved using another technique or [2] when the block is being done as a diagnostic measure prior to percutaneous neurolysis (or rhizotomy) or surgical sympathectomy. Some advocate that this approach should be utilized for all upper extremity sympathectomies [19].
For this approach, the patient is in the prone position, and image guidance is an absolute necessity (usually fluoroscopy, but CT can be utilized). After IV placement and proper positioning, an AP image of T2 and T3 vertebrae is obtained. The C-arm is then rotated obliquely until the lateral margin of the transverse process is just overlapping the lateral margin of the vertebral body. Next, cephalocaudad tilt is used to square off the first rib. The target structure is the midpoint of the T2 or T3 vertebra. Pneumothorax is a significant concern which can be minimized by decreasing the degree of oblique angle. Practitioners often balance the concern for pneumothorax against the likelihood of a challenging or suboptimal needle placement as a result of decreased obliquity. As with anterior techniques, coaxial needle placement greatly reduces complications. Final needle position should be verified with a lateral image showing the needle at the midpoint of the vertebral body.
Next, 0.5–3 ml of contrast is injected under real-time imaging or digital subtraction angiography to observe for vascular uptake or extraneous spread. Local anesthetic of 5 ml is then injected in divided doses, and the patient is monitored for sympathetic blockade.

Variable injection volumes have been suggested from 5 to 20 ml [20]. Feigl et al. [20
Only gold members can continue reading. Log In or Register to continue