Algorithm 13.1 Algorithmic approach for evaluation of the appendix

Normal appendix at CT. Coronal contrast-enhanced CT images demonstrate a fatty ileocecal valve (a, arrow). The appendix (b, arrow) arises from the cecal base approximately 2–3 cm inferiorly. Incidentally noted bladder diverticulum (astrisk)
The appendix may terminate in a variety of locations including paracolic (62 %), pelvic (19 %), midline (9 %), and retrocecal (10 %) [17]. In pregnant women, the enlarging uterus may displace the cecum and appendix superiorly into the right upper quadrant, especially in the later stages of pregnancy [18].
A normal appendix will be thin walled, usually measure less than 10 mm in diameter, and will be surrounded by clean, black fat at CT and T2-weighted MR with fat saturation (Fig. 13.2). An awareness of normal appendiceal diameter and wall thickness is important as these are two key features assessed when evaluating for acute appendicitis. Appendiceal diameter can be quite variable at cross-sectional imaging as the appendix may be collapsed or distended with fluid and/or air [19]. Appendiceal outer-wall-to-outer-wall diameter in healthy, asymptomatic adults at CT ranges from 3 to 11 mm [17, 19, 20]. It is worth noting that greater than 40 % of normal individuals may have an appendiceal diameter of >6 mm at CT [19, 20] as a 6 mm “cutoff” is cited in the graded compression ultrasound literature as a useful cutoff for the diagnosis of acute appendicitis [21]. 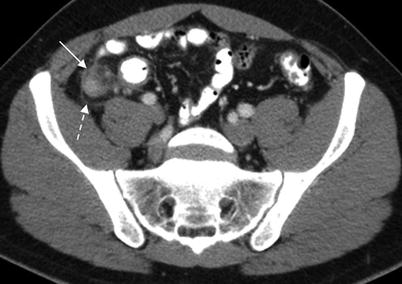 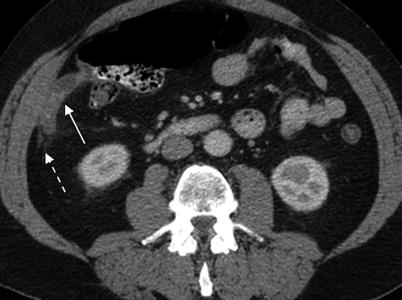 Crohn’s disease of the appendix. Axial contrast-enhanced CT images demonstrate marked cecal wall thickening with surrounding inflammation (a, arrow) as well as wall thickening of the appendix with surrounding inflammation (b, arrow). Terminal ileum (c, arrow) is also thick walled with upstream loops of dilated small bowel. Crohn’s disease confirmed at histopathologic evaluation
If the appendix is not visualized and there are no inflammatory changes in the right lower quadrant, the incidence of acute appendicitis is low, 2 % in two series with positive cases having scant intra-abdominal fat [22, 23]. If the appendix is not visualized, there are no inflammatory changes in the right lower quadrant, and there is sufficient intraperitoneal fat in the right lower quadrant to assess for inflammatory changes, acute appendicitis can safely be excluded [23].
Once a determination of acute appendicitis has been made, the next step is to evaluate for evidence of perforation. Patients with perforated appendicitis may be prescribed antibiotics and undergo interval appendectomy at a later date after a “cooling-off” period rather than undergo surgery at initial presentation. Patients with perforated appendicitis and periappendiceal fluid collections may undergo CT-guided drainage of the fluid collections.
Findings indicating appendiceal perforation include periappendiceal fluid collections, extraluminal air, and an extraluminal appendicolith (Fig. 13.7). As noted above, CT is highly sensitive, specific, and accurate for the diagnosis of acute appendicitis. However, CT does not perform as well for the diagnosis of appendiceal perforation, and a number of highly specific but relatively insensitive CT findings of perforation have been described. For example, extraluminal air is diagnostic of appendiceal perforation in the setting of acute appendicitis, but is a relatively insensitive finding (35–36 % sensitivity in two series [35, 36]). Similarly, periappendiceal abscess and extraluminal appendicolith are also diagnostic of perforation in the setting of acute appendicitis but have low sensitivities of 34–36 % and 21 %, respectively [35, 36].

Axial contrast-enhanced CT (a and b) demonstrates homogeneously enhancing mass lesion (arrow) involving the appendix, compatible with surgically proven carcinoid
Only gold members can continue reading. Log In or Register to continue

Tags: Cross-Sectional Imaging of the Abdomen and Pelvis
Sep 9, 2016 | Posted by admin in GENERAL RADIOLOGY | Comments Off on The Appendix
Premium Wordpress Themes by UFO Themes
WordPress theme by UFO themes