Thoracic Ultrasonography in the Critically Ill

The skin, superficial tissue and muscles allow for passage of US waves, however, cast variable degrees of reflection depending on the tissue density. This differential reflection results in a layered appearance. Ribs will completely block the US waves and create an acoustic shadow. Hence, to image the lung and pleura, it is essential to place the transducer probe between rib spaces and avoid the ribs (Fig. 2.2). This is often one of the more difficult aspects for the inexperienced ultrasonographer to learn, but is critical to obtaining images of the necessary quality. 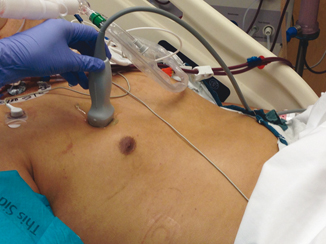 Probe position for pneumothorax detection
Air contained in alveoli impedes passage of US waves and creates reverberation at the junction of visceral pleura, resulting in a bright-appearing line that slides along with the lung during breathing cycle directly beneath the layers of chest wall. When air or fluid is present in the pleural cavity, it separates visceral pleura from the chest wall, disrupting this normal sliding. Fluid of whatever type will collect in the dependent areas, which are the posterior costophrenic recess in the upright position, along the lateral chest wall in lateral decubitus position and lateral costophrenic recess in the supine position. Air, on the other hand, will rise to apices with the patient in the upright position and along the anterior chest wall in the supine position. Thoracic US can be done in any position; however, the supine position is most common in the critically ill patient. Abducting the arm above the head can improve access to the lateral thoracic wall, which is particularly useful while performing interventions on thoracic cavity.
The probe should be gently placed in the intercostal acoustic window of the located area. The initial plane should be longitudinal, with the long axis of the probe parallel to the long axis of the patient’s body. This plane allows visualization of at least two ribs and the corresponding intercostal space. The survey of thoracic cavity is carried in a systematic fashion, from anterior to posterior direction. The anterior zone is lined by sternum, clavicle, anterior axillary line and costal margin. This zone gives maximum yield for detection of pneumothorax . The lateral zone lies between anterior and posterior axillary lines. The posterior zone, lying behind the posterior axillary line, is difficult to assess in a supine patient as the probe is often limited by the bed. If the clinical condition allows, then the patient should be turned to other side with probe facing upside down to achieve comprehensive imaging.
The transducer frequency used in thoracic US varies from 3.5 to 10 MHz. A 2- to 5-MHz curvilinear probe allows visualization of the deeper structures and the sector scan field allows a wider field of view through a small acoustic window. The chest wall, pleura, and lungs may be quickly surveyed with the curvilinear probe. Once an abnormality has been identified, a high-resolution 7.5- to 10-MHz linear probe can be used to provide detail [3]. Both B and M mode are useful for thoracic US. Doppler imaging has limited application in thoracic imaging, but one possible use is to detect blood vessels within the needle tract while accessing pleural space.

All lung signs arise at the level of pleura. The signs can be described as either static or dynamic [4]. The usual static artifact is a horizontal, hyperechoic line, parallel to the pleural line, at an interval that is exactly the interval between skin and pleural line. This artifact is called the US A-line. Another static artifact is called the US B-line. These are vertical lines, arising from the pleural line, spreading up to the edge of the screen without fading and are synchronized with lung sliding. The B-line is also called a “comet tail” artifact. Figure 2.3 When several B-line are seen in single lung scan then this pattern is called the “lung rocket.” Another kind of vertical artifact, again a comet-tail, is well defined and spreads up to the edge of the screen without fading. However, this artifact does not arise from the pleural line but from superficial layers of the chest wall, NOT the pleura. These line erase pleural lines and are called the E line, E for emphysema, and are seen in subcutaneous emphysema.

Sonographic A and B-lines
Lung sliding is a basic dynamic sign. Lung sliding shows the sliding of the visceral pleura against the parietal pleura. In experienced hands, one second scanning is suffice to detect lung sliding [4]. It is more prominent at lung bases compared to apices. Common pitfalls, which prevent detection of sliding, include a low-frequency probe and application of dynamic noise filters. Lung sliding is best characterized on M-mode scanning and creates a so-called “seashore” sign (Fig. 2.4 and Video 2.1).

“Seashore” sign
Apnea or complete lack of lung ventilation, like main stem intubation, replaces the sliding with “lung pulse,” which is the transmittance of cardiac impulse through the lung tissue towards the probe [5]. The lung pulse on M-mode scanning is synchronized with cardiac rhythm.

The diagnosis of pneumothorax can be made rapidly and precisely using US. The ultrasonographic identification of pneumothorax involves absence of lung sliding, presence of A-lines with or without presence of “lung point.”
The usual finding of lung sliding under the parietal pleura disappears as the lung collapses and air builds up between parietal and visceral pleural. The air between parietal and visceral pleura reflects ultrasonic waves, there by obliterating the B-line. However, the A-line created at the interface of parietal pleura remain intact. On an M-mode imaging, the “seashore” sign created by normal lung parenchyma is replaced by a “bar code” or a “stratosphere” sign (Fig. 2.5).

Bar code/stratosphere sign
In patients with mild to moderate pneumothorax , the area of lung that is still in contact with the pleura creates a “lung point”. It is point of transition between absence and reappearance of the lung sliding and the B-line. Lung point is a dynamic sign. Similar observation can be made on an M-mode image as disappearance of “barcode” and appearance of “seashore” sign. The finding of a lung point is highly indicative a pneumothorax. However, lung point is absent if lung is completely collapsed under a massive pneumothorax (Fig. 2.6a, b and Video 2.2).

“Lung point” sign
Absence of the so-called “bat sign” can also be used to look for pneumothorax [6, 7]. This is a normal pattern that can usually be easily seen and represents normal chest anatomy. The reason that it is called the bat sign is due to the likeness of a bat flying with its wings up, towards the viewer (Fig. 2.7). The anatomy that it represents is an upper and lower rib, with a pleural line, with the echoes thrown off by the ribs forming the bat’s wings and the body being made up of the hyperechoic pleural line. In a patient with a pneumothorax, this normal sign is no longer visible.

“Bat” sign
Thus, it can be seen with these constellations of signs using different scanning modes, it should be possible to accurately determine the presence or absence of a pneumothorax in most patients at the bedside, without waiting for a formal chest radiograph. The question is whether US is accurate enough to make clinical decisions without the use of radiography and we will examine this in the next section.

Evidence Base for Ultrasound for Pneumothorax

Tips for maximizing success when performing ultrasound for pneumothorax

Ultrasound for Pleural Effusion/Hemothorax in the ICU

Intensive care unit patients commonly develop intra-thoracic fluid during the course of their admission. Medical ICU (MICU) patients typically develop transudative or exudative effusions and empyema, while surgical or trauma patients overwhelmingly develop hemothorax [17].
In a prospective study of medical ICU (MICU) patients, over 60 % were found to have radiographic evidence of effusions at some point during their hospitalization. The most common causes included heart failure, atelectasis and parapneumonic processes [18]. Patients who have undergone thoracic or abdominal surgery, as well as those who have sustained thoracic trauma, will frequently accumulate intra-thoracic fluid collections—effusions and, more commonly in trauma patients, hemothorax . Approximately 60 % of poly-trauma patients sustain thoracic trauma and up to 18 % of these patients will require tube thoracostomy for hemothorax during their initial admission [19].
As the availability of small, mobile sonographic units increased during the 1990s, it became much more possible for physicians (non-radiologists) to perform bedside diagnostic procedures and image-guided treatments for effusions and hemothorax . There are of course many advantages of diagnosing and treating intra-thoracic fluid collections via US at the bedside. Compared to CT or x-ray technology, US is inexpensive and avoids ionizing radiation exposure. The performance of bedside US precludes the need to transport critically ill patients. The quality and sensitivity of US imaging is preserved, in contrast to portable x-ray films where up to 30 % of all studies are considered suboptimal [20].
Most of the early studies on diagnosing intra-thoracic fluid collections using portable US originated in the emergency medicine and trauma literature. The first description of the use of US to diagnose effusion was in 1967 [21]. In 1993 Rothlin et al. demonstrated the ease with which US can be used to diagnose CT-confirmed pleural effusion [22]. Shortly thereafter, Ma et al. demonstrated 96 % specificity, 100 % sensitivity and 99 % accuracy for identifying free pleural fluid with portable US as an extension of initial, abdominal examination [23]. Recent studies have demonstrated the superiority of US compared to chest radiograph in detecting lung pathology. In 2011, Xirouchaki et al. demonstrated a higher sensitivity, specificity and diagnostic accuracy for US examination of intra-thoracic fluid, compared to chest radiograph in a heterogeneous MICU/SICU patient population [24].
Ultrasound has also been proven effective in determining the etiology of effusions, based on the internal fluid echogenicity and associated changes in pleura and adjacent lung parenchyma [17]. Transudates, most frequently seen in patients with congestive heart failure, cirrhosis, or nephrotic syndrome, are always anechoic. They do not demonstrate any internal septations or echogenic signal. Exudates, on the other hand, can be either echoic or anechoic. Parapneumonic effusions and empyema are two exudative processes that can easily be confused for solid masses because they possess such complex internal septation architecture and echodensity due to fibrin deposition and cellular debris. Blood is usually seen as a heterogeneous hypoechoic collection that may or may not contain internal septations. As a retained hemothorax matures, however, it becomes thick-walled and very echogenic [17].
Only gold members can continue reading. Log In or Register to continue