Associated malformations: These are found in 26% of cases, and consist of chest malformation (pectus excavatum), renal agenesis and fetal hydrops.

Ultrasound findings: Stocker type I: Cysts measuring 2–10 cm in diameter; sometimes only one cyst is found. Stocker type II: Cysts smaller than 2 cm in diameter with echogenic tissue lying in between. Stocker type III: the echogenicity of the affected tissue is much stronger. In each case, displacement of the heart and the diaphragm is possible. Concomitant hydrops is found more often in type III. Up to sixty-five percent of cases develop hydramnios. Spontaneous regression of the lung anomaly has been known, such that the lesions may disappear completely. In addition, the echogenicity of the affected tissue may change during the course of pregnancy.

Procedure after birth: In severe cases, respiratory distress immediately after birth is common. Mechanical ventilation may even worsen the condition due to expansion of the lesion (over ventilation of nonfunctioning areas). Selective intubation of the healthy lung is a possibility. The newborn is placed on the side of the lesion to prevent overexpansion of the affected lung. The severity of the condition can be assessed postnatally using the magnetic resonance imaging (planning for surgery). The affected part of the lung is resected. Perioperatively, extracorporeal membrane oxygenation (ECMO) can be life-saving.

Prognosis: The macrocystic form rarely causes fetal hydrops and has an overall survival rate of more than 70%. The microcystic form, associated with hydrops, has a poorer prognosis. If symptoms such as dyspnea and tachypnea appear in the newborn, then the mortality is up to 78%. In older studies, fifty percent of patients have clinical symptoms later in life, and have a good sure vival rate. In severe cases, resection of a complete lobe may be necessary, causing deformation of the thoracic cage. This can be corrected with placement of expanders.

However, if part of the lung can be preserved, it expands, filling the hemithorax and resulting in improved functional capacity. 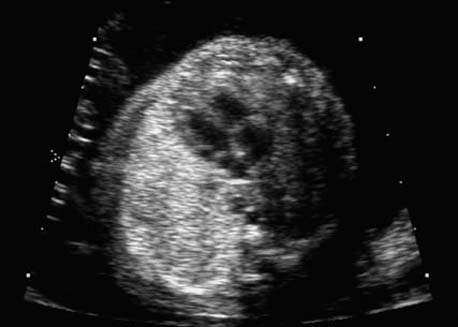 Fig. 4.1 Congenital cystic adenomatoid malformation of the lung. Cross-section of a fetal thorax at 21 + 6 weeks. The left lung appears to be full of small cysts. Displacement of the heart to the right. The right lung is not affected. 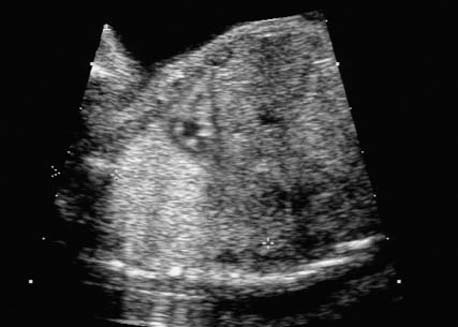 Fig. 4.2 Congenital cystic adenomatoid malformation of the lung. Same patient as in the previous image, in a longitudinal section showing the liver and echogenic lung tissue. 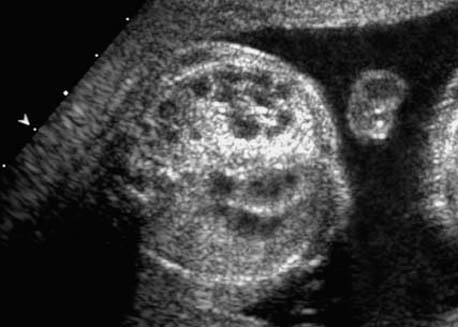 Fig. 4.3 Congenital cystic adenomatoid malformation of the lung. Left-sided anomaly at 21 + 2 weeks consisting of large cystic lesions, displacing the heart to the right. 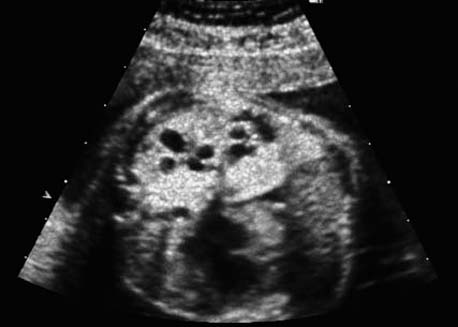 Fig. 4.4 Congenital cystic adenomatoid malformation of the lung. Same case as in the previous image, at 23 + 5 weeks. 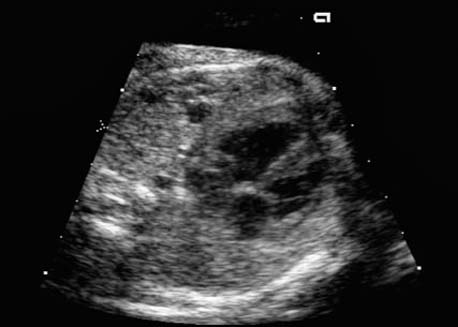 Fig. 4.5 Congenital cystic adenomatoid malformation of the lung. The same patient seen at 28 + 3 weeks. The findings are now less severe, with partial resolution of the echogenicity of the affected lung and displacement of the heart.

Definition: Esophageal atresia is a congenital disorder caused by closure of the esophagus with a blind end. In 90% of cases, there is an associated tracheo-esophageal fistula at the distal end.

Embryology: The anomaly arises due to defective division of the anterior intestines into trachea and esophagus during the 6th–7th week after menstruation (21–34 days after conception). In over 90% of cases, a tracheo-esophageal fistula is present, so that hydramnios—an important diagnostic clue—may be absent, as the amniotic fluid is diverted over the fistula into the stomach.

Ultrasound findings: Esophageal atresia should be suspected when, in the presence of hydramnios (rare before 25 weeks), repeated screening examinations fail to demonstrate the fetal stomach. Due to the presence of tracheo-esophageal fistula in most cases, the stomach may be filled, but its small size is suspicious. In some cases, the blind end of the esophagus filled with fluid is detectable. Severe hydramnios may be present. In chromosomal anomaly or VACTERL association, fetal growth retardation may be evident. Failure to demonstrate the stomach in repeated examinations and concomitant hydramnios are suspicious signs for esophageal atresia.