Tumors of the upper gastrointestinal tract

A diversity of benign tumors and related conditions occur in the esophagus. They are, however, mostly uncommon lesions and their main importance lies in distinction from malignant tumors (Crawford, 1999). Benign tumors are mostly mesenchymal in origin and lie within the esophageal wall. Clinically, they may be asymptomatic or produce dysphagia and sometimes bleeding (Choong and Meyers, 2003).

Leiomyomas are the most common benign non-epithelial tumors of the esophagus and are of smooth muscle origin (Postlethwait, 1983; Mutrie et al., 2005). Generally, they occur as a solitary 20–50 mm submucosal mass lesion at the lower one third of the esophagus, bulging into the lumen as a sessile intramural mass or as pedunculated polyps (Geboes, 2002). They may occur in up to 10% of adult esophagi but rarely attain a size to produce symptoms. If they are large they may ulcerate and produce pressure symptoms. Histologically, they are composed of interlacing smooth muscle fascicles with variable fibrosis and appear as a white whorled mass on gross examination (Mutrie et al., 2005).

Other benign mesenchymal submucosal tumors include fibromas, lipomas, hemangiomas, neurofibromas and lymphangiomas; these, however, are very rare (Crawford, 1999).

Mucosal polyps descriptively titled as fibrovascular polyps are composed of a combination of fibrous, vascular and adipose tissue covered by intact mucosa. They occur in the upper third of the esophagus and are often large and pedunculated (Ozcelik et al., 2004; Sultan, 2005).

Fibrous polyps are also known as inflammatory pseudotumors and are considered to be reactive non-neoplastic lesions. They are located in the upper or mid esophagus as sessile or pedunculated lesions and may attain a large size. On microscopic examination, these lesions comprise myomatous fibrous tissue with thin walled blood vessels. Mucosal ulceration is present and hence mimics a malignant lesion. Biopsy is essential to distinguish between the two (Santos et al., 2004; Ozolek et al., 2004).

Inflammatory reflux polyps are a special variant and are made up mostly of granulation tissue situated in the lower esophagus. They are thought to be related to reflux disease and hence the term reflux or gastro-esophageal polyp-fold complex. They are not pre-malignant (Geboes, 2002).

Squamous papillomas are smooth, round, pink, sharply demonstrated, sessile lesions. They are usually single but occasionally multiple lesions with a central fibrovascular connective tissue core covered by bland hyperplastic papilliform squamous mucosa. The age range for presentation is between 17 and 78 years. These rare lesions are typically found in the lower esophagus and range over a few millimeters to 200 mm in diameter (Mosca et al., 2001; Geboes, 2002). In some cases, human papilloma virus (HPV) antigen has been identified (Woo and Yoon, 1996). The distinction between squamous papilloma and viral wart is unclear and, indeed, they may be related. There is no association with malignancy but they may recur after resection.

Most esophageal cancers are either squamous cell carcinomas or adenocarcinomas. Rare, uncommon and aggressive lesions include small cell carcinoma, adenoid cystic carcinoma, mucoepidermoid carcinoma, melanoma and carcinoma with a spindle cell component. Metastatic tumors can involve the esophagus by direct spread from the stomach and upper and lower respiratory tract. Rare blood-borne metastasis may occur from distant sites (Crawford, 1999).

Squamous cell carcinoma accounts for most esophageal cancers. It occurs in adults over the age of 50 with a male predominance; the male:female ratio is 4:1. There are wide geographical variations in its incidence. Areas of high rate of incidence include Puerto Rico, South Africa, Central Asia, Northern China and Eastern Europe. Low risk areas include most of Western Europe and North America (Crawford, 1999). The major risk factors are alcohol and tobacco (Bahmanyar and Ye, 2006; Hashibe et al., 2007). Human papilloma virus (HPV) has also been implicated as a probable etiological factor in the development of squamous cell carcinoma of the esophagus (Woo and Yoon 1996; Matsha et al., 2007). Dietary and environmental factors have been proposed to increase the risk and nutritional deficiencies act as promoters and potentiators of the tumorigenic effects of environmental carcinogens (Bahmanyar and Ye, 2006). Broad spectrum p53 gene point mutations present in these tumors are related to the effects of methylating nitroso compounds in the diet and in tobacco smoke (Meltzer, 1996; Mandard et al., 1997). Mutations in p16 gene and allelic loss involving other chromosomes are prevalent in these cancers as well, in keeping with the step-wise acquisition and accumulation of genetic alterations which ultimately give rise to cancer (Meltzer, 1996; Fujiki et al., 2002).

Clinically, it has an insidious onset and produces dysphagia and obstruction gradually. Weight loss and debilitation result from impaired nutrition and the effects of the tumor itself. Hemorrhage and sepsis occur with tumor ulceration (Crawford, 1999). Complications include aspiration of food through a cancerous tracheo-esophageal fistula and extension into adjacent mediastinal structures (Anderson and Lad, 1982). 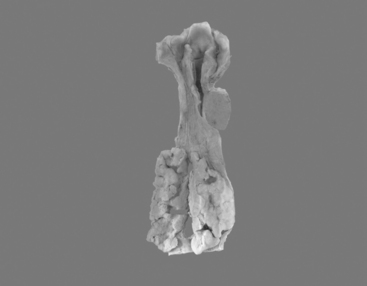 The microscopic appearances are similar as in squamous cell carcinoma anywhere else. The degree of differentiation may vary and variation within a tumor is common. The histological criteria are keratinization and intercellular bridges, which are prominent in well-differentiated carcinoma, sparse and focal in poorly differentiated tumors (Fletcher et al., 2000). Dysplastic squamous epithelium frequently borders invasive squamous cell carcinoma and represents the histological precursor (Sugimachi et al., 1989). This epithelium is characterized by varying degrees of altered maturation and cytoplasmic differentiation with nuclear pleomorphism, hyperchromasia, irregular chromatin and abnormal mitoses (Kuwano et al., 1987).

Five-year survival with superficial carcinoma is 75% compared with less than 25% in patients with advanced disease (Fletcher et al., 2000). Local and distant recurrence after surgery is common. The important prognostic features in a resection specimen are tumor size, depth of invasion, presence of lymph node metastasis and status of resection margins (Edwards et al., 1989; Lam et al., 1996).

The vast majority of primary esophageal adenocarcinomas arise in the lower esophagus in a background of columnar metaplasia, also known as Barrett’s esophagus, and hence are associated with chronic gastro-esophageal reflux (Haggitt, 1994; Williams et al., 2006; Sayana et al., 2007; De Jonge et al., 2007). Rare adenocarcinomas arising from ectopic gastric mucosa are distinguished by their location in the upper esophagus (Christensen and Sternberg, 1987). Adenocarcinoma arising in the setting of Barrett’s esophagus occurs in patients over 40 years with a median age in their 50s with an increasing incidence in the Western population (Williams et al., 2006; Sayana et al., 2007). Although the exact pathogenesis is unclear, genetic alterations in this disease are well documented.

Barrett’s esophagus is a condition in which the normal stratified squamous epithelium is replaced by metaplastic columnar epithelium that predisposes to the development of esophageal adenocarcinoma (Figures 9.2, 9.3, see color insert) and Figure 9.4 (Haggitt, 1994). Neoplastic progression in Barrett’s esophagus occurs by a multistep process associated with genomic instability and the development of aneuploid cell populations (Ramel et al., 1992). Molecular and immunohistochemical studies have suggested that mutations of the p53 gene accompanied by chromosome 17p allelic loss play an important role in the pathogenesis of the tumor (Fitzgerald, 2005; Sayana et al., 2007). p53 protein over-expression and allelic deletions on chromosome 17p have been shown to be present in some Barrett’s adenocarcinomas (Ramel et al., 1992). 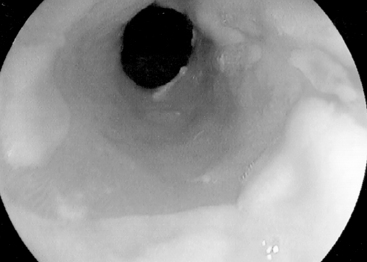 As with other forms of esophageal carcinoma, most patients present at an advanced stage with dysphagia, progressive weight loss, bleeding and chest pain (Crawford, 1999). The prognosis is poor; the mortality from esophageal adenocarcinoma exceeds 80% at 5 years (Fitzgerald, 2005). Resection of early cancers, limited to the mucosa and submucosa, improves the survival rate by 80% (Fletcher et al., 2000).

Regenerative/hyperplasic polyps are one of the commonest types of gastric polyps. They are thought to arise from excessive regeneration following mucosal damage. Coexistent gastric abnormalities include chronic gastritis, partial gastrectomies, Helicobacter pylori and intestinal metaplasia (Gencosmanoglu et al., 2003). They are sessile or pedunculated with a smooth or lobulated surface (Figure 9.5). They are usually multiple and vary from few millimeters to 40 mm (Gencosmanoglu et al., 2003; Santos et al., 2004). Microscopically, there is hyperplasia of gastric foveolae leading to elongated and tortuous glands with cystic change and irregular branching. The stroma is edematous with infiltrated chronic inflammatory cells and contains smooth muscle fibers from the muscularis mucosa (Figure 9.6, see color insert) (Haboubi, 2002a). They are mostly benign and occasionally are complicated by carcinoma (Geboes, 2002). The incidence of synchronous or metachronous cancer elsewhere in the stomach is up to 3% of cases (Geboes, 2002