Ultrasound Assessment of the Hepatic Vasculature

30 Ultrasound Assessment of the Hepatic Vasculature

Because chronic liver disease is the tenth most common cause of death in the United States, evaluation of the liver and its vasculature is a very common indication for abdominal Doppler assessment.1,2 The liver vessels are effectively imaged with ultrasound in a high percentage of patients. Therefore, Doppler sonography is frequently the first modality used to evaluate patients with suspected hepatic vascular disorders. This chapter reviews the normal hemodynamics of the liver and the sonographic assessment of portal hypertension, portal vein obstruction, hepatic vein obstruction, and intrahepatic portosystemic shunts.

The Doppler signal from the left hepatic vein is usually best optimized with the transducer in a subxyphoid approach. The right hepatic vein is best seen from a lateral intercostal approach near the mid axillary line. Optimization of the middle hepatic vein signal is more variable, ranging from subxyphoid to intercostal near the anterior axillary line to subcostal. In all of these locations, the transducer is generally positioned so that forward flow in the hepatic veins (i.e., out of the liver, toward the inferior vena cava [IVC] and the heart) is away from the probe and is displayed below the baseline, while reversed flow (away from the heart and into the liver) is above the baseline. 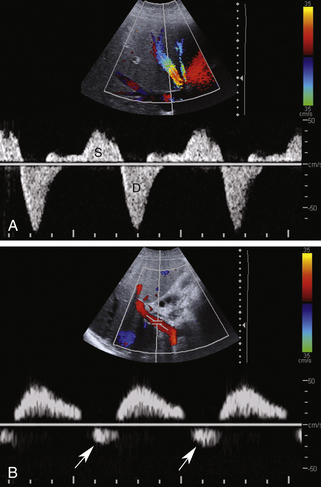 The normal portal vein demonstrates continuous antegrade flow and provides approximately 75% of blood supply to the liver.5 Although minor degrees of respiratory phasicity are reported, these are difficult to appreciate with Doppler techniques since sampling is performed during suspended respiration. 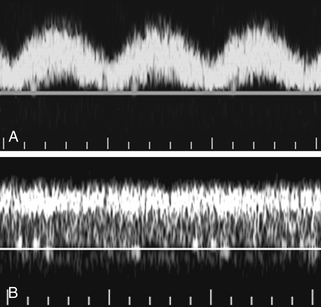 Another way to quantify portal flow pulsatility is a simple ratio between the minimum and peak flow.7 Using this approach, a flat waveform would have a portal vein pulsatility (PVP) of 1 and a very pulsatile waveform where the minimum velocity dropped to the baseline would have a PVP of 0. Wachsberg and colleagues7 showed that 64% of normal patients had a PVP less than 0.54. That means that in a majority of patients the minimum velocity was less than half the peak velocity. Increased pulsatility in the portal vein is more prominent in thin individuals. As with the hepatic vein pulsatility, portal flow pulsatility can be blunted by a deep inspiration.

Right heart failure and tricuspid regurgitation may produce exaggerated portal vein pulsatility.8 Given the degree of pulsatility that can be seen in normal patients, however, cardiac dysfunction should probably not be considered unless the portal pulsatility is so great that the minimum velocity reaches 0 or reverses (i.e., the VPI is at least 1; see Figure 30-2, B.).9 It is also important to correlate the portal vein waveform with other sonographic signs of heart dysfunction, including enlargement of the hepatic veins and IVC and alterations in the hepatic vein waveform.

The hepatic artery waveform has a low resistance profile with broad systolic peaks, gradual deceleration from systole to diastole, and well-maintained diastolic flow throughout the cardiac cycle. This is similar to that of other solid parenchymal abdominal organs. The normal hepatic artery resistivity index ranges from 0.5 to 0.7. Evaluation of the hepatic artery is very important in liver transplant patients and will be considered in Chapter 34.

The precise pathophysiology of cirrhosis is unknown, but hepatic inflammation with regeneration is central to the process. Patients may be completely asymptomatic or experience complete hepatic decompensation. Mortality is largely related to complications of portal hypertension such as ascites (50%), variceal bleeding (25%), renal failure (10%), bacterial peritonitis (5%), and complications of ascites therapy (10%).2

Cirrhosis causes hepatocellular death, parenchymal degeneration, and regeneration. This leads to bridging fibrosis that causes increased resistance to blood flow in the sinusoids and the central venules that drain the sinusoids. Initially, increased portal pressures maintain portal vein flow volume. But as resistance to hepatic inflow progresses, it eventually equalizes with resistance to flow in portosystemic collaterals and portal flow starts to be diverted into the collaterals. 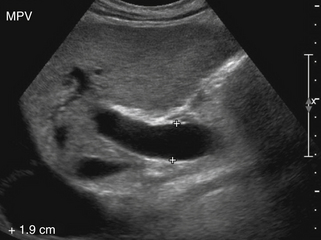 FIGURE 30-4 Portal vein enlargement in a patient with portal hypertension. Oblique view of the liver hilum shows a portal vein that measures 1.9 cm (cursors). The upper limit of normal for portal vein diameter is between 1.3 and 1.6 cm.

If one assumes that elevated portal pressure maximizes venous distention, it follows that little or no additional distention will occur when the portal vein outflow is indirectly restricted by sustained inspiration. Lack of caliber variation of the splenic and mesenteric vein during respiration is thus another parameter that has been investigated. In one study, this approach had a sensitivity of 80% and specificity of 100% in diagnosing portal hypertension.19 As with portal vein diameter measurements, this method has not gained widespread utility, likely due to a combination of interobserver variability and difficulties in measurement accuracy.

Simple measurements of portal vein velocity are one of many Doppler techniques used to evaluate patients with suspected portal hypertension. A sensitivity of 88% and a specificity of 96% were achieved by Zironi and co-workers13 using a mean portal vein velocity cutoff below 15 cm/sec. Haag and associates used a maximum portal vein velocity of 21 cm/sec as their cutoff for diagnosis of portal hypertension. Along with a portal vein diameter cutoff of 12.5 mm, they reported a sensitivity and specificity of 80%.11 The differences in these two studies illustrate that the expected portal velocity values in normal subjects and cirrhotic patients vary considerably. Although portal velocities tend to decrease as portal pressures increase, the correlation is weak and is not statistically significant.11,20 Sources of variability include interobserver variability, intermachine variability, presence of variable collateral pathways (especially recanalized umbilical veins), and variations caused by differences in patient positioning, different phases of respiration, different states of fasting, different exercise status, and different cardiac output.

Knowing that portal vein cross-sectional area typically increases and portal velocity typically decreases in the setting of portal hypertension has led some investigators to study the ratio of these parameters, assuming that it will increase dramatically with portal hypertension. The ratio of portal vein cross-sectional area and portal velocity is known as the congestion index. Moriyasu and colleagues21 showed that the congestion index was 2.5 times higher in patients with cirrhosis and portal hypertension than in normal subjects. Sensitivities ranging from 67% to 95% have been achieved using congestion index measurements.11,21 Unfortunately, the interobserver variability in area and velocity measurements is relatively high, and this variability is compounded when the parameters are combined in a ratio. Therefore, despite the theoretical value in this approach, optimistic results obtained in highly dedicated institutions may be difficult to reproduce in other centers.

When portal hypertension is caused by cirrhosis, hepatic artery flow may increase substantially as compensation for diminished portal vein flow. Ultimately, the bulk of liver blood flow is provided by the hepatic artery, which may become subjectively enlarged and tortuous on color flow examination (Figure 30-5) and show substantially increased blood flow on Doppler interrogation. Enlarged intrahepatic arteries can in fact simulate dilated bile ducts and produce a parallel channel sign (Figure 30-6). Unfortunately, the hepatic artery does not have the capacity to make up for the loss of portal vein flow, and persistent hepatic ischemia is a significant cause of ongoing hepatocyte damage and progression of fibrotic scarring. 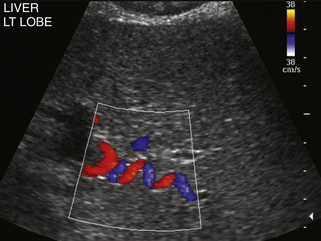 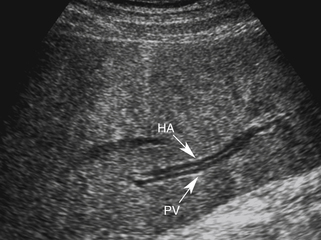 Although measurement of vessel diameters and velocities and calculation of various indices are helpful in some patients and used extensively in some institutions, the most widely used and reliable approach for the diagnosis of portal hypertension is the evaluation of portal systemic collaterals. Portal systemic collaterals can be divided into tributary and developed collaterals. Tributary collaterals are preexisting vessels that normally drain into the portal, splenic, and mesenteric venous systems. Blood flow in all tributaries should be directed toward the mesenteric, splenic, and portal veins.

The coronary vein, also known as the left gastric vein, is the most prevalent portal systemic collateral. It is identified angiographically in 80% to 90% of patients with portal hypertension.24,25 Because its presence implies an increased risk for variceal hemorrhage, it is the most clinically important of the portal systemic collaterals. The coronary vein runs parallel to the left gastric artery between the two layers of the lesser omentum. It arises along the gastric pylorus and lesser curvature of the stomach and proceeds toward the esophageal hiatus, where it forms a U-shaped loop that returns inferiorly to drain into the portal system near the portal splenic confluence (Figure 30-7). 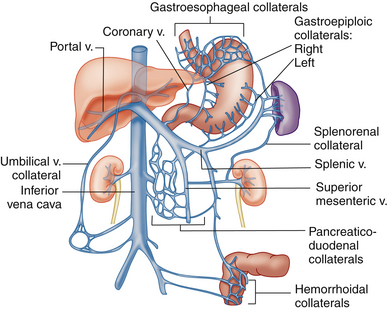 Using the left lobe of the liver as an acoustic window, the coronary vein can be identified sonographically as a vessel communicating with the superior aspect of the portal or splenic vein in the region of the confluence. It is located directly anterior to the bifurcation of the celiac axis or posterior to the common hepatic artery or the splenic artery (Figure 30-8, A and B). It is oriented in a slightly oblique plane, traveling superiorly and to the left of the portosplenic confluence and toward the gastroesophageal junction. Normal coronary vein blood flow, like all portal tributaries, should be directed toward the portal vein (Figure 30-8, C). 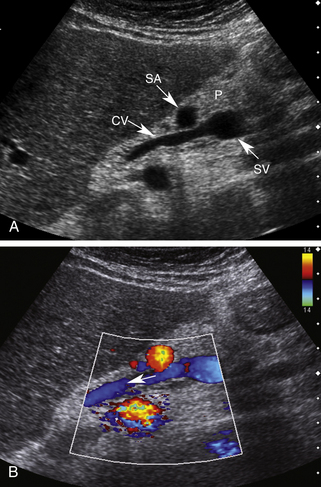 FIGURE 30-9 Coronary vein collateral in portal hypertension. A, Sagittal view of the epigastrium shows the coronary vein (CV) extending from the splenic vein (SV). The splenic artery (SA) and pancreas (P) are also seen on this image. B, Color Doppler view similar to the gray-scale view shown in A shows reversed flow (arrow)