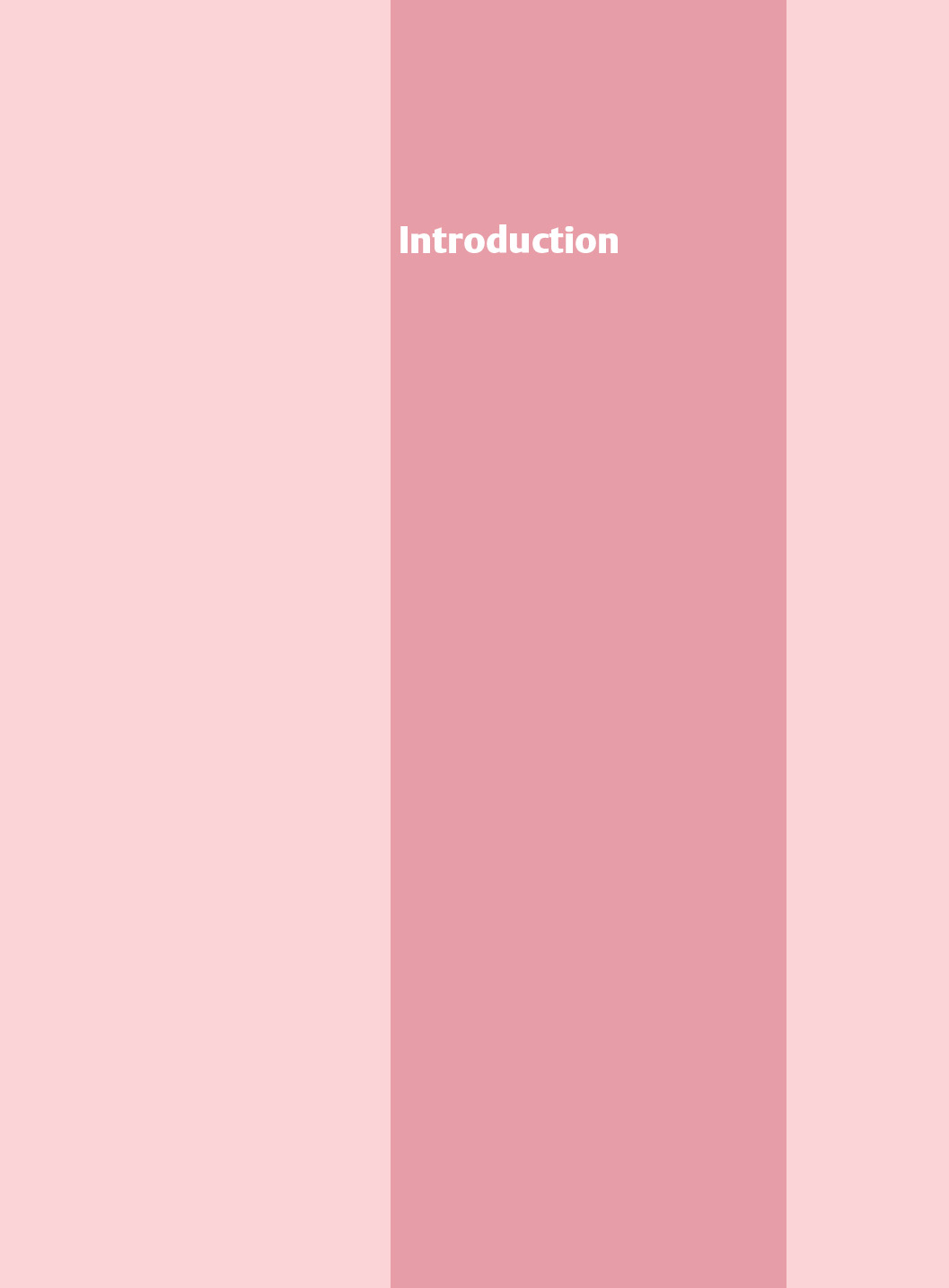 Perinatal mortality is considered to be an indicator of the quality of antenatal care and perinatal medicine. It is defined as intrauterine fetal death with a fetal weight of at least 500 g, or as neonatal death within the first 7 days after birth. At present, the perinatal mortality rate in Germany is six per 1000 live births. Intrauterine fetal deaths account for two-thirds of perinatal deaths. The most relevant factors for perinatal mortality are congenital fetal malformations, insufficiency of the uteroplacental circulation, and very premature birth. Ultrasound examination in pregnancy is thus of the utmost importance, as fetal malformations and placental insufficiency can be diagnosed early in pregnancy.

The aim of this examination is to confirm the presence of a viable intrauterine pregnancy, to verify the expected delivery date by measuring the crown–rump length, and to identify multiple gestations. In addition, even at this gestational age, early signs of fetal malformations should also be looked for.

A rigid upper limit of 2.5 or 3.0 mm is not useful, as the age of the mother has to be taken into account for the evaluation of the risk of chromosomal anomaly. The risk of Down syndrome is evaluated as one in 498 in a fetus of a 20-year-old mother with a crown–rump length of 55 mm and nuchal translucency of 2.5 mm, whereas the same fetal measurements in a 45-year-old mother raise this risk to one in 27. The best time to perform the first screening for early detection of fetal malformations appears to be 12–13 weeks of gestation. Earlier ultrasound does not allow detailed examination of the fetus to the same extent.

The basic examination should include—in addition to measurements of crown–rump length—head and abdominal circumferences and nuchal translucency, evaluation of extremities, stomach, bladder, fetal body contours, and fetal heart. Using the zoom function of the ultrasound apparatus, it is often possible to obtain a four-chamber view of the heart. The great vessels can only be reviewed using color flow mapping (CFM). This method is also necessary for exclusion of a single umbilical artery. The extremities can be viewed very well at this gestational age of 12–13 weeks. An overall view of the fetus at this early gestational age is more easily obtained than at later stages.

For reasons of safety, Doppler flow examinations in the first trimester should be reserved only for urgent indications. Color flow mapping requires comparatively less energy than the Doppler velocity waveform assessment.

At least 15 min are required for a thorough first trimester screening when normal findings are present. 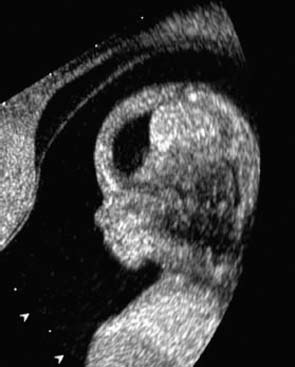 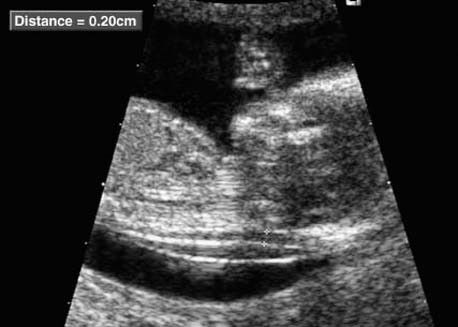 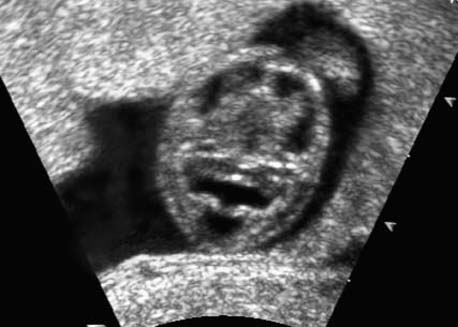 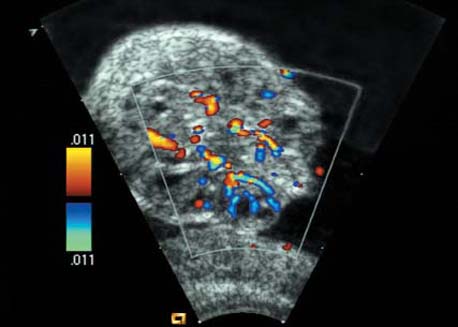 Fig. 1.4 First screening: early pregnancy, 8–11 weeks.
Cross-section of the fetal head at 12 + 3 weeks, depicting the hyaloid artery supplying the lens of the eye. 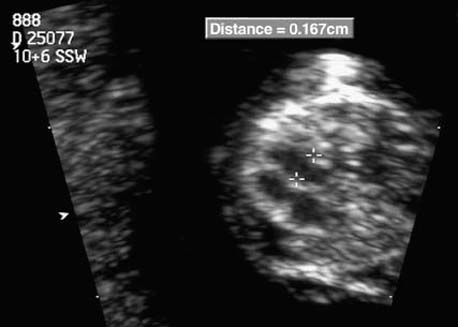 Fig. 1.5 First screening: early pregnancy, 8–11 weeks.
Cross-section of the fetal thorax at 10 + 6 weeks at the level of the heart. The four-chamber view is clearly visible. The width of the left ventricle measures 1.67 mm (vaginal sonography, 10 MHz). 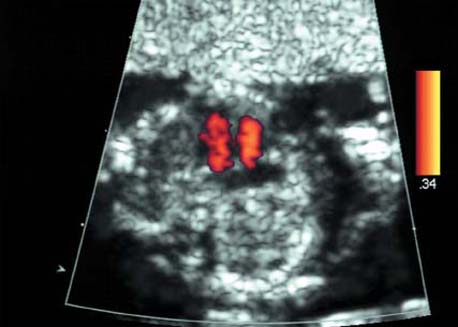 Fig. 1.6 First screening: early pregnancy, 8–11 weeks.
Cross-section of the fetal thorax at 13 + 1 weeks at the level of the heart. Apical view of the four chambers of the heart using Doppler sonography (color Doppler energy). Depiction of diastolic blood flow through the tricuspid and mitral valves into the ventricles. 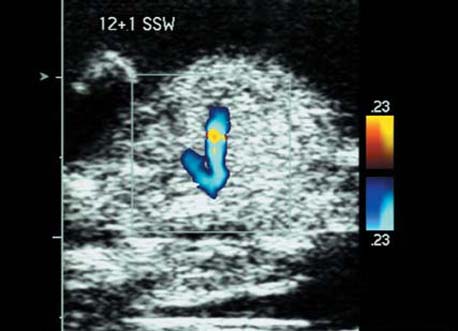 Fig. 1.7 First screening: early pregnancy, 8–11 weeks.
Cross-section of the fetal thorax at 12 + 1 weeks in the region of the outflowing vessels. Blood flow into the aortic arch and the ductus arteriosus (Botallo’s duct) is demonstrated. 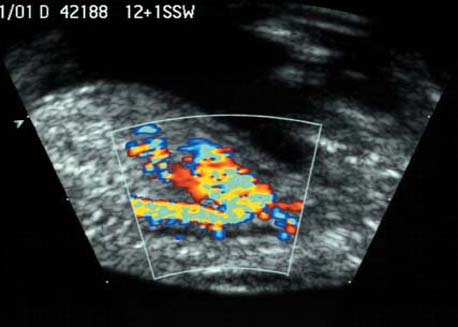 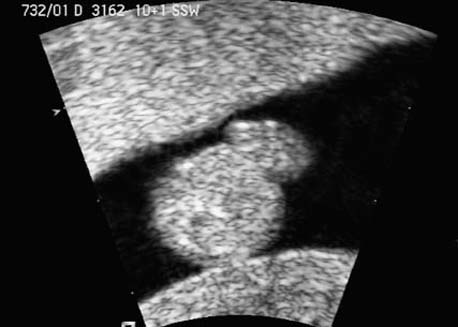 Fig. 1.9 First screening: early pregnancy, 8–11 weeks.
Cross-section of the fetal abdomen at 10 + 1 weeks at the region of the navel, showing a “physiological omphalocele.” 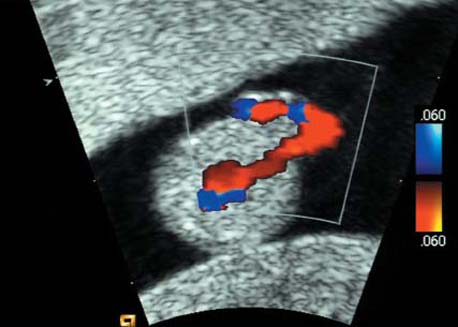 Fig. 1.10 First screening: early pregnancy, 8–11 weeks.
Same as the previous figure, with the use of color Doppler sonography. Protrusion of the intestines through the base of the navel is clearly visualized next to the umbilical vessels. 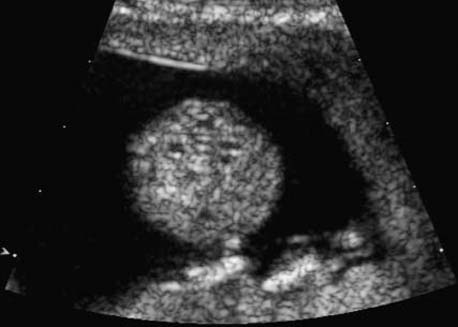 Fig. 1.11 First screening: early pregnancy, 8–11 weeks.
Cross-section of the fetal abdomen in a dorsoanterior fetal position at 13 + 0 weeks, showing the kidneys and the calyces of the renal pelvis on both sides. 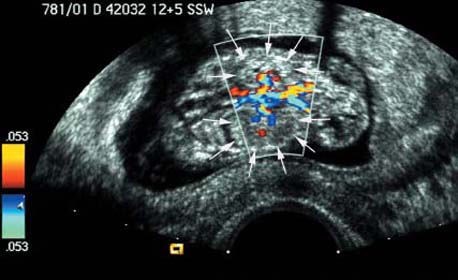 Fig. 1.12 First screening: early pregnancy, 8–11 weeks.
A section of the anterior region at 12 + 5 weeks, showing the fetal aorta up to its bifurcation, as well as both the renal arteries and the kidneys (arrows). 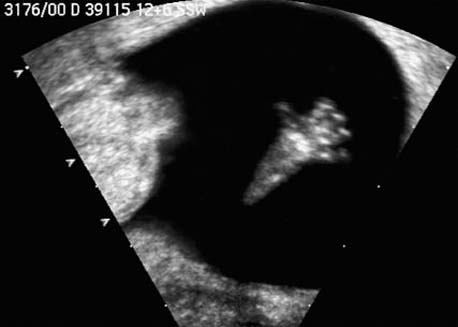 In addition to confirming a viable pregnancy, the aim of this screening is to evaluate the number of fetuses, placental location, and—most importantly—disturbances in fetal development and anomalies, as well as assessment of the fetal heart and amniotic fluid.

For biometric assessment, biparietal and fronto-occipital diameters, abdominal circumference and femur length are measured. Measurements of other long bones may also prove useful.

For an effective survey of fetal anatomy, ultrasonography should be performed systematically. This is reported as follows.

Head: Important structures here are the middle echo, thalamus, lateral ventricles (normal width of the posterior horn up to 8–10 mm), size and form of the cerebellum, and the septum pellucidum. Eyes, nose, and lips should also be visualized.

Neck: Measurement of nuchal translucency in second-trimester screening is less predictive and cannot be analyzed statistically (Snijders and Nicolaides), but it should still be visualized as an extra parameter.

Thorax: The axis and location of the heart and lungs in the thorax should be identified. To exclude cardiac situs abnormalities, it is important to understand the fetal position within the uterus as well as the orientation of fetal heart within the thorax. Echocardiography is performed as an extra examination. The diaphragm is seen most easily in the longitudinal plane. For diagnosis of diaphragmatic hernia, a knowledge of the topography of the thoracic and abdominal organs is essential (mediastinal shift, displacement of the heart and stomach).