If a sound wave hits a reflective surface such as bone or a calculus, the majority of the wave is reflected back (hyperechoic) and an ‘acoustic shadow’ is cast. Hypoechoic or anechoic objects such as fluid-filled cysts allow the sound wave to pass with little attenuation. This fools the ultrasound probe’s inbuilt compensation, resulting in ‘acoustic enhancement’ (an artefact that makes the tissue behind the cyst appear bright). Both acoustic shadowing and enhancement are artefacts which can be helpful in image interpretation
3.2 Ultrasound artefact examples 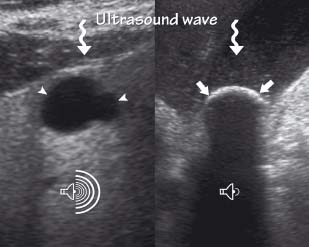 The left image shows a simple hepatic cyst (arrowheads). This is fluid-filled (anechoic) and therefore allows sound to pass freely to the far side of the cyst resulting in ‘acoustic enhancement’ (loud volume symbol). This artefact can help distinguish a cyst from a solid lesion such as a metastatic deposit. On the right a large gallstone reflects almost all the sound back to the ultrasound probe (hyperechoic). Structures deep to any reflective structure cannot be seen clearly because of the ‘acoustic shadow’ formed (quiet volume symbol). Gas within the bowel reflects sound in the same way
3.3 The Doppler principle 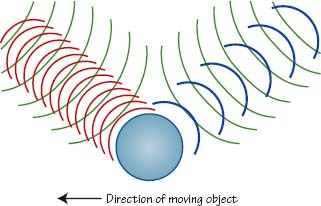 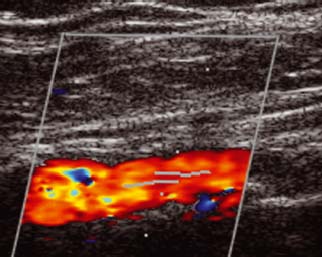 Ultrasound imaging can make use of the Doppler principle in the assessment of blood flow through the cardiovascular system. Here an artery near to a vascular graft is assessed for patency. The red/orange flow represents flow moving predominantly towards the probe

Ultrasound (US) is a dynamic, real-time, imaging modality utilising sound waves in the megahertz range (1–15 MHz), which are completely inaudible to humans. The velocity of sound waves travelling through a medium is dependent on the density of that medium. Sound waves also lose energy to the medium, which is influenced by the wave frequency. This phenomenon is called ‘attenuation’ and with higher frequencies the attenuation is greater. Consequently high frequency ultrasound is preferable to image superficial structures and low frequency ultrasound is preferable to image deeper structures.

Tags: Radiology at a Glance
Mar 7, 2016 | Posted by admin in GENERAL RADIOLOGY | Comments Off on Ultrasound (US)
Premium Wordpress Themes by UFO Themes
WordPress theme by UFO themes