Vascular Anatomy below the Diaphragm

Vascular Anatomy below the Diaphragm

This chapter discusses the relevant anatomy of the abdominal aorta, from the diaphragm to the distal vessels in the foot. Mention is made of important variant anatomy as well as collateral pathways. Detailed variant anatomy and collateral flow patterns are beyond the scope of this text.

The paired phrenic arteries usually arise from the aorta in close proximity to the aortic hiatus. The inferior phrenic supplies the abdominal surface of the diaphragm. In addition to arising directly from the aorta, it may arise from the celiac artery, its branches or, rarely, from the renal arteries.

The superior mesenteric artery (SMA) supplies the midgut from the ligament of Treitz to the midtransverse colon. It typically arises about L-1. The origin is just caudal to the celiac artery origin. The first branch is the inferior pancreaticoduodenal artery, which divides and a branch anastomosis with the similarly named superior counterpart to form the pancreaticoduodenal arcades. Vessels found on the left side of the SMA are usually jejunal and ileal branches. The branches terminate as straight vessels, vasa recta, close to the serosa of the bowel. These vessels are located on the mesenteric side of the bowel.

The middle colic artery is a moderate-sized vessel that arises from the anterior surface, which divides into right and left branches. Its supply is to the transverse colon. There is typically a terminal branch of the SMA that continues the inferior course of the vessel. The ileocolic typically arises at a 45-degree angle from the main trunk of the SMA and provides flow to the cecum and anastomotic branches to the right colic. Ileal branches and the appendicular artery arise from this vessel as well. The right colic artery arises between the middle and ileo colic origins. Its branches anastomose with both of these vessels. The right colic supplies the right colon and proximal transverse colon. 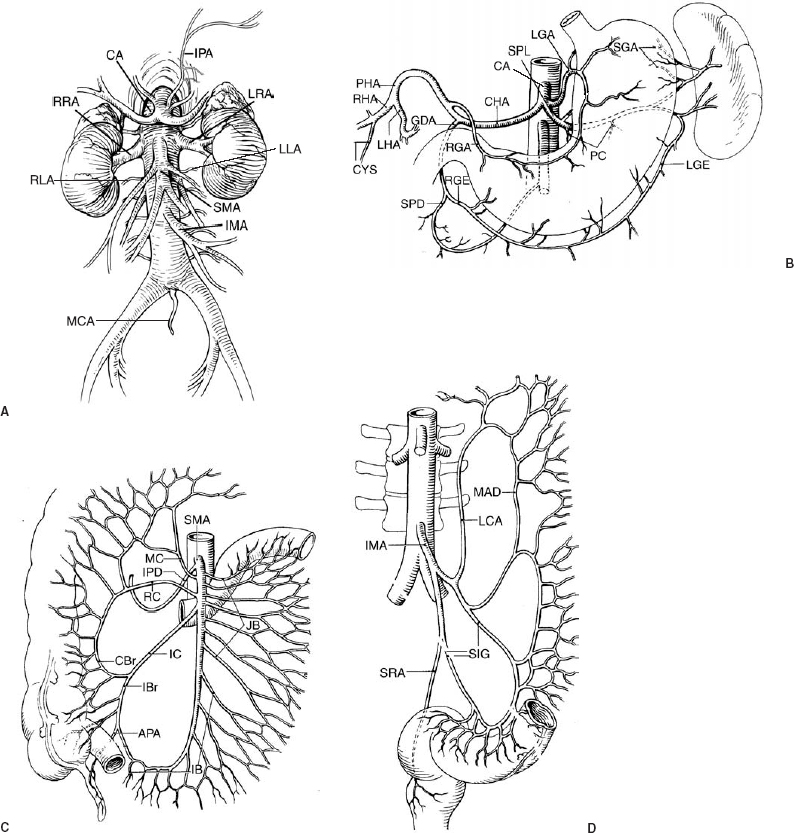 The inferior mesenteric artery (IMA) arises from the left anterolateral surface of the aorta, on the left at about the L3 level. It supplies the distal transverse colon, left colon, and sigmoid and superior rectum. The left colic is the first branch, which divides into ascending and descending branches. The ascending branch joins the left branch of the middle colic to form the important arc of Riolan. This anastomosis is important because there is a high incidence of IMA origin occlusion in elderly patients. A similar anastomosis is the marginal artery of Drummond. This vessel lies within bowel mesentery and is present along the mesenteric border of the large bowel. The marginal artery of Drummond is formed by the arcades of the ileocolic, right colic, middle colic, and left colic branches. There are usually two or three sigmoid branches arising from the IMA. The final branch of the IMA is the superior hemorrhoidal, which divides to supply both sides of the superior rectum. The superior hemorrhoidal forms an important anastomotic network with middle hemorrhoidal branches. The superior hemorrhoidal is a branch of the internal iliac, and therefore these vascular systems are joined here.