In recent years, magnetic resonance imaging (MRI) has become a very important modality for diagnosing wrist and hand diseases including osteoarthritis, rheumatoid arthritis (RA), occult fracture, avascular necrosis (AVN), ligamentous/tendinous injuries, impaction syndrome, and nerve entrapment syndrome.1,2 MRI is a noninvasive and nonirradiative imaging tool, and can provide high soft tissue contrast resolution. Thin and contiguous slices are needed for adequate MR imaging of the wrist because even the larger ligaments of the wrist are no greater than 1–2 mm thick.3 New MRI techniques such as 3D volume acquisitions on higher magnetic fields improve signal to noise ratios and visualization of wrist structures in detail with a shorter scan time.4 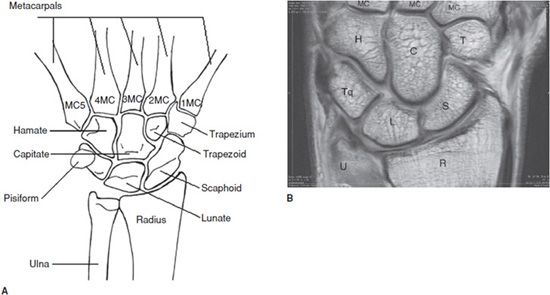 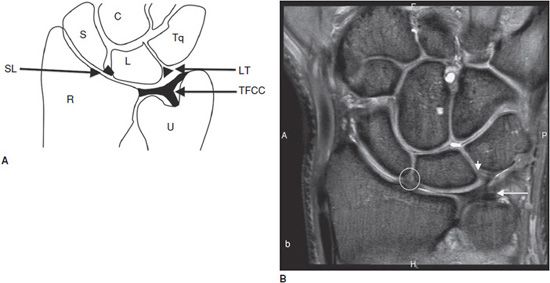 The triangular fibrocartilage complex (TFCC) is located between the ulnar head and the first carpal row (the lunate and the triquetrum). The TFCC has three main roles: (1) stability of the distal radioulnar joint (DRUJ), (2) axial load transmission from the carpus to the ulna, and (3) ulnar-sided carpal stability.8 The TFCC has several components including disc proper, triangular ligament, volar and dorsal radioulnar ligaments, meniscus homologue, ulnolunate ligament, ulnotriquetral ligament, and ulnar collateral ligament (Figure 16-3).6 Given the anatomical complexity of the TFCC, we need to use multiplanar and multisequence MRI for full evaluation. In coronal planes, the disc proper, triangular ligament, meniscus homologue, and ulnotriquetral ligament can be evaluated. In axial planes, the volar and dorsal radioulnar ligaments are better seen.3–4 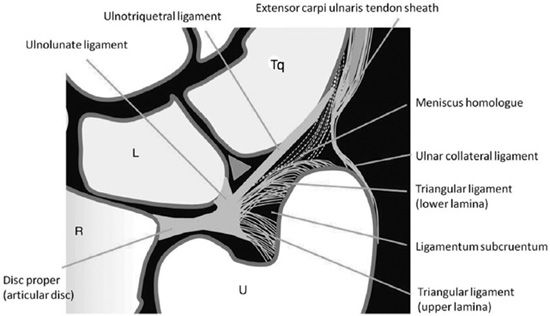 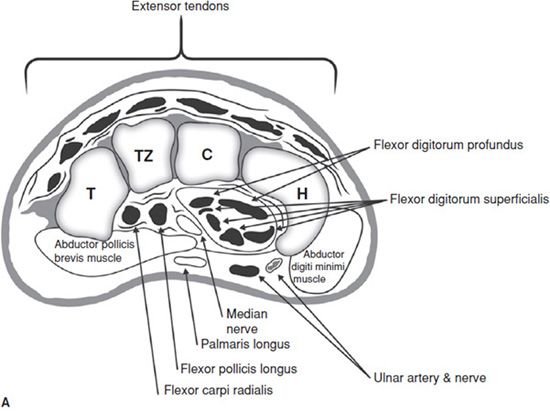 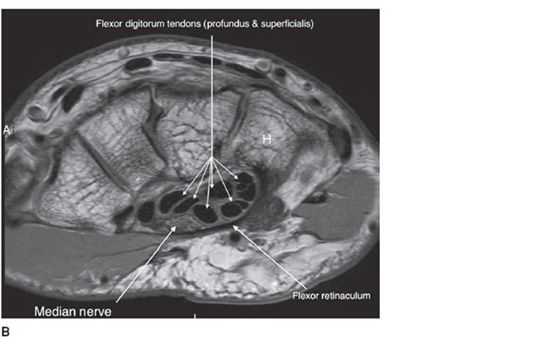 The Guyon canal is a small fibro-osseous, semirigid, triangular tunnel at the medial volar aspect of the wrist and it contains the ulnar nerve, artery, fat, and occasionally veins. The walls of this canal consist of the pisiform medially and the hook of the hamate laterally. The floor is composed mainly of the flexor retinaculum and the origins of the hypothenar muscles and the roof is mainly composed of the pisohamate ligament (Figure 16-5).7,9 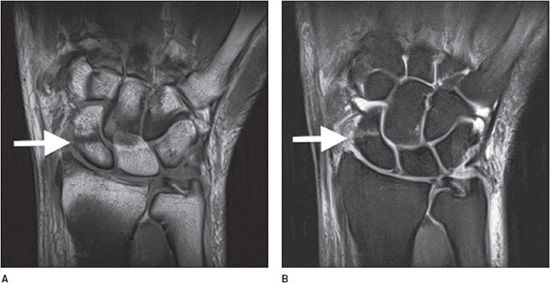 Figure 16-7. Scaphoid fracture. Coronal (A) proton density weighted and (B) fat-suppressed proton density-weighted MR images of the wrist show dark T1 (part A) and bright T2 (part B) line (arrow) through the scaphoid bone consistent with a fracture.

The AVN of scaphoid fractures demonstrates low T1 and low T2 signal with collapsed proximal fragment due to fibrosis and/or sclerosis.

AVN of the lunate is known as Kienböck disease, which is more common in males between ages of 20 and 40. The exact cause of Kienböck disease is not known, but predisposing factors may include repetitive trauma (dominant hand of manual laborers), acute trauma, and negative ulnar variance. Kienböck disease can be classified into four stages. In the first stage, the changes are subtle. However, as disease progresses, the lunate becomes sclerotic and finally ends up with secondary osteoarthritis (stage 4). MRI shows signal changes of the lunate in all stages, but its value is in early detection of AVN on stage 1, where focal or diffuse low signal intensity is seen on T1WI in affected areas of marrow involvement with normal radiograph.8,13 The signal intensity on T2-weighted images (T2WI) varies dependent on stages of edema, fibrosis, or sclerosis (Figure 16-8). A uniform loss of signal intensity in the lunate on T1WI and T2WI is hallmark of AVN on stage 4, where the lunate is severely collapsed and fragmented and secondary osteoarthritic changes are seen in the wrist. 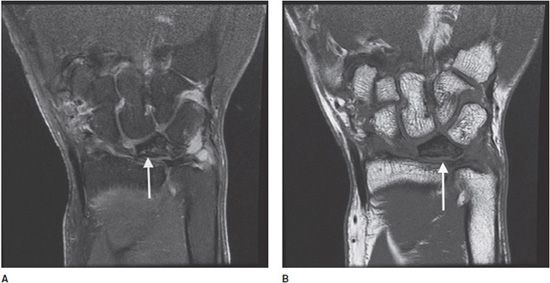 Figure 16-8. Kienböck disease. Coronal proton density with and without fat saturation MR images of the wrist (parts A and B, respectively) show dark signal changes in flattened deformed lunate (arrow) consistent with Kienböck disease (avascular necrosis of the lunate).