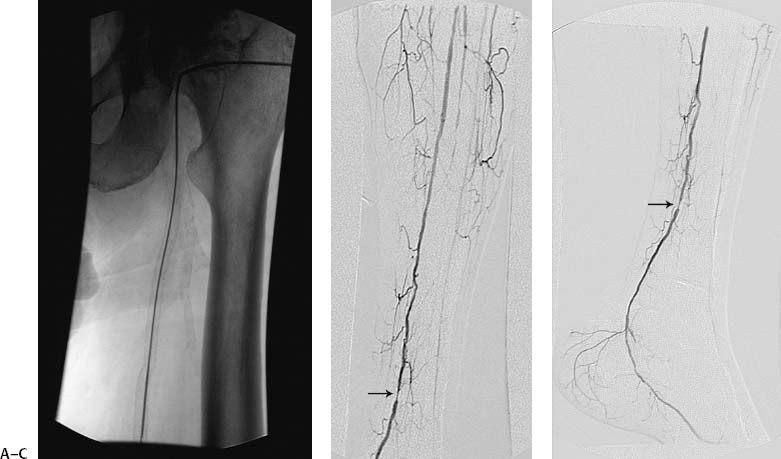 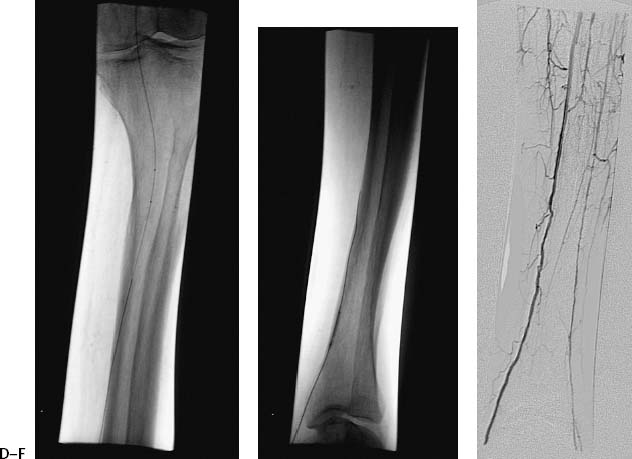 The right common femoral artery was catheterized using the Seldinger technique, and a 5-French (F) sheath was placed. A pigtail catheter was advanced into the abdominal aorta, and aortography with bilateral runoff was performed. The contralateral common femoral artery was then catheterized over the aortic bifurcation. A lower extremity angiogram was performed revealing complete occlusion of the anterior tibial and peroneal arteries and a high-grade stenosis of the left posterior tibial artery at the level of the distal calf.

The right common femoral artery had already been catheterized for arteriography. An antegrade puncture into the left common femoral artery was performed, and a 5F sheath was inserted (Fig. 12-1A). Five thousand units of heparin were administered intra-arterially. Lower leg arteriography was then performed to define the lesion (Fig. 12-1B, C). An endhole catheter was advanced down the superficial femoral artery, and a 0.018-inch guidewire was used to cross the stenosis (Fig. 12-1D). The end-hole catheter was then exchanged for a 3 mm- × 2 cm-long low-profile 0.018-inch angioplasty balloon catheter, which was used to dilate the lesion (Fig. 12-1E). Follow-up arteriography showed no residual stenosis with rapid antegrade flow to the foot (Fig. 12-1F). Revascularization enabled the foot ulcer to heal in subsequent weeks.