Ultrasound produces biological effects by two tissue interactions: heating and cavitation. Heating is caused by the mechanical friction of the tissue moving during passing of the ultrasonic wave. Cavitation is the production and collapse of small bubbles in the inter- and intracellular tissue fluid. Before discussing these mechanisms and their potential biological effects, it is useful to briefly discuss the properties of medical ultrasound and how it is clinically applied.

The primary reason for the popularity of ultrasound is because it does not use ionizing radiation, which makes it especially appealing in obstetrical imaging. Procedures such as estimation of fetal age and determination of fetal position and placental localization can be accomplished with no ionizing radiation exposure to the fetus. Ultrasound is also used in cardiac imaging for determination of ejection fraction, detection of pericardial effusion, detection of wall motion abnormalities, and detection of vascular stenoses. In radiology, ultrasound is used for the diagnosis of many vascular and abdominal diseases, including bladder tumors, renal abnormalities, vascular abnormalities, and line placements.

Higher-power ultrasound can also be used to kill biological tissue. High-intensity focused ultrasound (HIFU) procedures are used to treat cancer patients. By focusing high-power ultrasound onto a target area, the temperature is raised enough to kill the target tissue. More moderate ultrasound power levels are used in diathermy and hyperthermia to produce local heating of tissue. It is used in physical therapy and sports medicine to deliver moderate heat directly to damaged tissues to increase and improve healing of tears, strains, and bruises.

Unlike X-rays and gamma radiation, ultrasound is a pressure wave, not an electromagnetic wave. It produces no direct ionization. Ultrasound is a series of pulsed sound waves. Sound is mechanical energy that travels as pressure waves through a medium. That is, the pressure increase and decrease during each ultrasound wave cycle. This pressure wave exerts mechanical forces causing molecules to move back and forth from their original stationary position. Ultrasound waves used in medical imaging have frequencies from 1 to 20 MHz. Low-frequency sound waves penetrate deeper into tissue than high-frequency sound waves. The pressure in a 5-MHz ultrasound wave increases to maximum and decreases to a minimum 5 million times each second. This is above audible sound that has frequencies of 2–20,000 Hz.

As shown in Fig. 16.1, the sound frequency is shown by the oscillating wave. As the magnitude of the wave decreases, the energy is absorbed by the medium. The energy loss heats the medium. The magnitude of the velocity the wave travels at in the medium depends on the acoustic properties of the medium, which include its density, elasticity, and compressibility. Water is a good transmitter of sound, whereas air is a poor transmitter at ultrasound frequencies and bone is a very good sound transmitter. This is important because ultrasound frequencies can travel reasonable distances in tissue and water, but do not penetrate lung or air cavities. The sound frequency is transmitted in packets, as shown in Fig. 16.2. The frequency of the packets is called the pulse repetition frequency (PRF).

Figure 16.1 A sound wave as it interacts with a medium. Notice the magnitude decreases with depth.

Figure 16.2 A typical pulsed ultrasound beam with time. This is the waveform used in clinical real-time imaging. Short pulses of fixed frequency and duration are used to generate a dynamic image. The ultrasound pulse deposits energy as it traverses the patient.

There are two frequencies associated with an ultrasound wave. The first is the ultrasound frequency, and the second describes how many ultrasound pulses are sent out each second. The second frequency is called the pulse repetition frequency (PRF), which describes the number of pulses per second sent into the patient. Changing the ultrasound frequency often requires changing the transducer head, which is applied to the patient’s skin. Changing the PRF is accomplished by changing a setting on the control panel. If the depth of a user-defined region of interest is changed, modern scanners will often automatically adjust the PRF to compensate for the change in pulse travel time. Increasing the depth of the region of interest decreases the PRF because a greater time must be allowed for the deeper echoes to return. The PRF is usually in the range between 100 and 12,000 Hz. An increase in the PRF results in an increase in the ultrasonic power sent into the patient.

Ultrasound images are presented in two modes: B- or 2D mode and M-mode. A 2D scan presents in a two-dimensional image of the anatomy. It is a still frame mode just showing the anatomy. The M-mode is a B scan with motion. The M-mode was the first ultrasound modality to record display moving echoes from the heart, and thus the motion could be interpreted in terms of myocardial and valvular function. A typical ultrasound M mode image is shown in Fig. 16.3.

Figure 16.3 A typical 2D ultrasound image of a normal bladder. In this image, the object lines represent an interface point in the tissue media. The dark area in the middle is the bladder filled with urine. It has almost no echoes because it is a homogeneous liquid. The labeling on the image shows the MI and TI, which are discussed in the text. 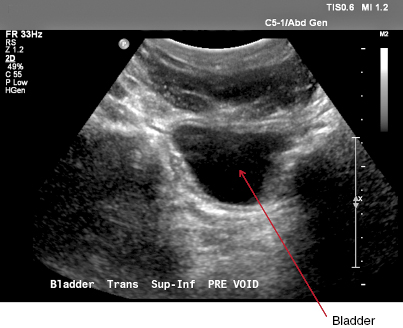 Doppler ultrasound scanning is used to measure a moving structure or flowing blood in the body. These images are formed by analyzing the Doppler shift in the reflected signals. The images appear similar to conventional normal 2D images but show moving structures as a color overlay on the anatomical grayscale image. Figure 16.4 shows a typical Doppler ultrasound image of the abdomen.

Figure 16.4 Pulsed Doppler image of the abdomen showing the anatomical structures and color images of flowing blood in the renal artery. 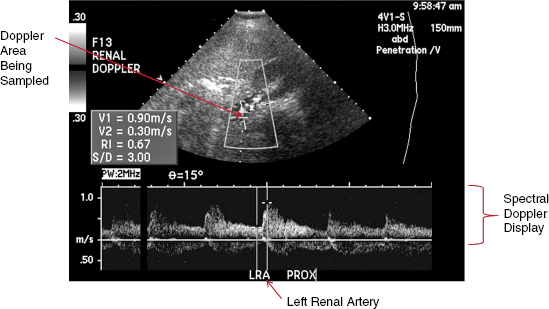 The wave form at the bottom of Fig. 16.4 shows the pulsation in the blood flow. Pulsed Doppler requires higher power levels than regular M-mode scans because only part of the reflected signal is used to obtain the Doppler information.

Ultrasound beam power is the amount of acoustic energy per time. Beam intensity is the beam power per unit area and is specified in mW/cm2. To describe the ultrasound beam, there are four quantities of intensity. These are described in Table 16.1 and vary with time and distance (space). The four are necessary because the beam varies with time (the pulse) and space as the beam is not necessarily fixed in space and the beam varies in size with depth.