9: Radiation Effects on Tissues and Organs

Following the previous chapters’ discussions of microscopic radiation effects on cells, this chapter turns to the larger macroscopic effects on tissues and organs. A tissue is an assembly of cells, which, as an entity, carries out a particular function. An organ is a collection of tissues combined to provide a function or service for the body. Usually, organs are made up of functional tissue, the parenchyma, and the supporting tissues, the stroma. For example, the parenchymal tissue in the heart is the myocardium. It is responsible for pumping blood through the body. The stromal tissues of the heart include the connective tissues, blood vessels, and nerves supporting the myocardium. The effects of exposure to the entire body are treated in the next chapter.

X-rays were shown to cause biological effects shortly after their discovery by Wilhelm Conrad Roentgen in 1895. In fact, the early researchers often estimated the radiation output of their X-ray tubes by exposing a patch of skin. A dose that produced noticeable skin reddening was known as an erythema dose. In today’s units, an erythema dose corresponds to about 7 Gy. Recall that the gray (Gy) is the radiation unit used to measure the radiation energy absorbed by tissue. Less than 10 years after the discovery of X-rays, Clarence Dally, one of Thomas Edison’s assistants, died of cancer caused by exposure to X-rays. Dally was working on developing an X-ray fluoroscope. After Dally’s death, Edison dropped all research on X-rays.

Over the years, the “law” of Bergonié and Tribondeau has been modified to more accurately describe the responses seen in humans. We now recognize that the effect of radiation is essentially the same for all tissues and organs, but the time for the damage to be expressed depends on the mitotic index of the cells. That is, cells with higher cell turnover and higher replication rates show radiation damage sooner and hence appear to be more sensitive to radiation. Basically, there is no difference in the radiation damage to cells showing early or late effects. The only difference is the time when the effects appear. Different tissues and organs however will show different responses to radiation depending on the mix of cells in the tissues. The response of an organ and its apparent radiosensitivity varies depending on the mixture of tissues making up the organ.

The latent period is the time between radiation exposure and the appearance of an effect. The latent period is one of the prime indicators of tissue radiosensitivity. This is because early and late effects are easier to observe in a living organism than mitotic indices or cell turnover rates. Tissues with mixed populations can show both early and late effects. In such a case, there may be two latent periods, one for appearance of the early and a second latent period for the late effect. Acute, early effects are those that appear within about a month of exposure. Late effects can appear months or years after exposure. These early and late reactions are important to the clinician because radiation damage may appear bimodal in time with a significant time period between the appearance of early and late effects. Skin is an organ with high turnover dermal cells and lower turnover stromal cells. Skin shows early effects, a period of apparent healing and then in the case of high doses, a late, serious, and difficult-to-heal injury. Figure 9.1 presents a schematic illustration of a bimodal plot showing how the early effect can be separated by a significant time period before the late effects become manifest. 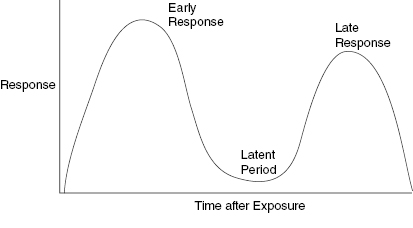 Figure 9.2 Schematic illustration of the relationship between severity of effect and radiation dose for a tissue reaction, formerly called a deterministic effect. The severity of a tissue reaction increases as the dose increases. Note that the existence of a threshold does not mean that there is no damage below the threshold, only that it is not evident. 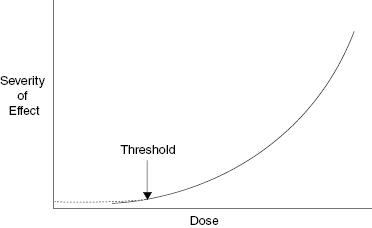 The difference between stochastic and deterministic effects is basically the level of interactions. Stochastic effects arise from interactions at the cellular level, primarily with the DNA molecule. If these interactions result in mutations passed on to future generations, they can lead to cancer or genetic effects. Deterministic effects on the other hand result from damage to groups of cells forming tissues and organs. If damage to cells making up a tissue is large enough to affect the tissue function, the effect will be evident in the loss of tissue function and the threshold dose is exceeded.

Most information on radiation effects on normal tissues and organs comes from observations during and after radiation therapy treatments. This is because the doses and effects during radiation cancer treatments are carefully monitored. Cancer treatments with radiation began within a few years of Roentgen’s discovery. Radiation treatment of cancer is based on the fact that rapidly dividing cells are more sensitive to radiation. Cancer is made up of rapidly dividing cells, so the cancer cells are expected to be more sensitive to radiation than normal tissue. The major challenge in radiation therapy is to eradicate the cancer without unduly damaging surrounding normal tissues. Even today, the amount of radiation delivered to the tumor is limited by the collateral damage to nearby normal tissues. Radiation oncologists have been observing radiation injuries to normal tissues since the birth of the field. Early treatments were limited by the poor penetrating ability of the radiation, so skin reactions limited the dose that could be safely delivered to deeper lying tumors. In the 1950s and 1960s, higher-energy radiation beams became available and data on radiation effects to internal tissues and organs became available.

In radiation oncology, the damage to organs is reported in terms of a tumor dose (TD) that produces complications in normal tissues with 5% probability within 5 years following the end of radiation treatment. This is termed the normal tissue complication probability (NTCP) TD 5/5. Another term used in radiation oncology is NTCP TD 50/5, which is the tumor dose that produces a 50% NTCP in 5 years. These terms are normally not used outside the field of radiation therapy because other medical doses are so much smaller than those used in radiation therapy.

Some important organs, their TD 5/5 and 50/5 values, and the effects of radiation on the tissues are presented here in alphabetical order.

After a significant (>1 Gy) radiation dose from exposure to the whole body, all blood elements are adversely affected. Increases in dose result in an increased effect, and the effects are seen earlier. In the case of a whole body exposure from a radiation accident, the loss of white blood cells means the body’s defenses against infection are diminished. Damage to the skin and intestine make the body particularly vulnerable to bacterial infection during the first few weeks following exposures greater than 1 Gy.

A person exposed to 1 Gy has their lymphocyte cell count reduced. He or she will be more susceptible to infection. Early symptoms of such exposures mimic the flu, that is, loss of appetite, nausea, diarrhea, and vomiting. The chapter on whole body radiation treats the effects of decreased white blood cells following radiation exposure more completely.

Most of the long term, late effects on tissues and organs are the result of injury to blood vessels, especially to those making up the microvasculature. Damage to the capillaries bringing oxygen and nutrients to the cells of an organ will inevitably affect its function.

The interior surface of blood and lymphatic vessels is lined with a thin layer of endothelial cells which form a barrier between the circulating blood or lymph inside the vessel and the vessel wall. Damage to the endothelial cells allows white blood cells and fluids to pass through the vessel. Radiation at lower doses can cause damage to the capillary vessels. Such changes can include less flexibility and greater vessel stiffness leading to decreased perfusion. This is especially important in the blood vessels, brain, and skin. Figure 9.3 is a scanning electron microscope image of a blood platelet on interior surface of a damaged blood vessel. The blood platelet illustrated is ready to start the formation of a blood clot. 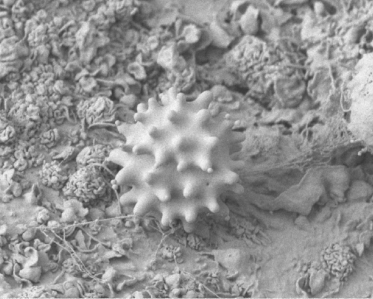 Because brain cells do not reproduce, they are not significantly damaged unless their blood supply is compromised. The doses for major complications of the brain are 45 Gy TD for NTCP of 5% in 5 years and 60 Gy TD for NTCP of 50% in 5 years. Complications are necrosis and an infarction. An infarction is a group of tissue that dies because of a lack of oxygen caused by an obstruction of the tissue’s blood supply. There are reports of decrease in IQ scores of about one IQ point per 4 mSv.

Radiation treatment for breast cancer is usually spread out over 6 weeks with five 2-Gy treatments per week. This results in a total dose of approximately 60 Gy.

Late side effects from breast irradiation usually appear one or more years after treatment. The two major long-term complications of breast radiation treatments are fibrosis and lymphedema. Fibrosis is a hardening or stiffening of the tissues due to loss of elasticity due to a diffuse scarring. Lymphedema is a swelling due to localized fluid retention caused by damage to the lymphatic system. The complications are the result of blood vessel and connective tissue damage that were in the radiation field. Studies have shown that there is no increase in thyroid cancer following radiation treatment for breast cancer.

Major complications include necrosis of the lining of the esophagus. The esophagus, the tube leading from the mouth to the stomach, is located between the lungs in the chest. During radiation to lungs to treat lung cancer, the esophagus is often included in the radiation field. Pain or difficulty with swallowing, heartburn, and a sensation of a lump in the throat are side effects of the radiation. Symptoms usually occur 2–3 weeks into therapy and subside a few weeks after completing treatments.

The major complication of radiation to the eye is cataract formation, which is classified as a tissue reaction/deterministic effect with a threshold. Radiation cataracts begin as an opacity near the posterior pole of the eye and progress forward. For many years, the threshold for cataract induction was believed to be about 2 Gy from chronic exposures over many years. Fractionated doses can cause the formation of cataracts after a latent period of 2 years or more depending on the age of the individual and the time period of exposure. Recent studies however have shown that the threshold for cataract formation may be significantly lower. Interventional physicians with exposures spread over many years have shown cataract formation at cumulative doses as low as 0.8 Gy.