The human body is a complex arrangement of chemicals and chemical reactions. Atoms are combined into specific arrangements creating the chemicals that are used in precise reactions. In addition to orderly reactions, the chemicals combine to form the complex substances that make living cells. Chemicals are nonliving components that allow cells, the basic units of all life, to perform all aspects of life. These characteristics include organization, growth, and reproduction. As can be seen in Fig. 1.1, the organization and structure of the body begins with chemicals and progresses through greater levels of organization, beginning simply with cells and ending with the entire human body.

Figure 1.1 Organization of the body, beginning with chemicals combining into simple atoms and progressing through cells, tissues, organs, and, finally, the whole body. From Tortora and Nielsen (2012), figure 1.1, p. 5. 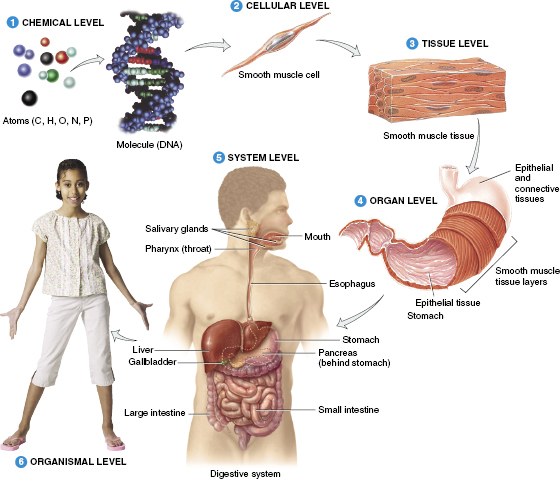 The cell is the simplest structure of the human body. As the levels of organization expand, so does the complexity of the system. Groups of cells with the same, or similar, functions gather to form tissues. For instance, the primary function of pancreatic cells is to produce insulin whereas cells of the kidney aid in the filtration of blood. When a group of similar tissues function together, they become known as an organ. Most organs have several roles and belong to multiple organ systems. An organ system consists of multiple organs that function together and benefit the body as a whole. For example, the respiratory system, which consists primarily of the lungs, allows carbon dioxide to be exchanged for oxygen in the blood. The blood then delivers oxygen to cells throughout the body.

In this chapter, the levels of organization in the human body will be discussed: beginning with the cell, moving through tissue and organ function, and ending with homeostasis.

Cells are the smallest viable component of all living organisms. Organisms can be either unicellular, containing only one cell, or multicellular, containing many cells. The human body is multicellular and made up of approximately 100 trillion, 1014, cells. These cells are split into over 200 different types within the body. Each cell type is responsible for a specific function, but, despite differences in structure and function, there are four basic components contained in every cell. These features are the cell membrane, cytoplasm, cellular organelles, and genetic material.

The cell membrane, or plasma membrane, is responsible for the separation of the internal environment of the cell from the external environment. The membrane is primarily constructed of phospholipids, which form a bilayer that makes most of the membrane. Phospholipids allow for movement of lipid-soluble substances into and out of the cell by simple diffusion through the membrane itself. In addition to phospholipids, cholesterol is interspersed throughout the membrane. Cholesterol strengthens the structure of the membrane by decreasing its fluidity. Another vital component of the cell membrane is protein. Protein molecules, like cholesterol, are embedded in the membrane. These proteins have several different functions within the membrane. The functions include forming protein channels and acting as transporters and as receptor sites. Protein channels permit passage of molecules, such as water or other ions, into the cell unabated. Transport proteins, or carrier enzymes, also assist with the movement of molecules into or out of the cell. Receptor proteins are primarily located on the outer side of the membrane. The receptors are used to transmit signals into the cell from external signals. These signals include the absorption of hormones or signaling chemicals. Although the plasma membrane is the outer boundary of the cell, it is not a static, wall-like structure. Shown in Fig. 1.2 is the basic structure of a plasma membrane.

Figure 1.2 Current concept of the structure of the plasma membrane. Cholesterol is interspersed sporadically in one side of the phosopholipid bilayer, whereas proteins more commonly span both phosopholipid layers. From Tortora and Nielsen (2012), figure 2.2, p. 30. 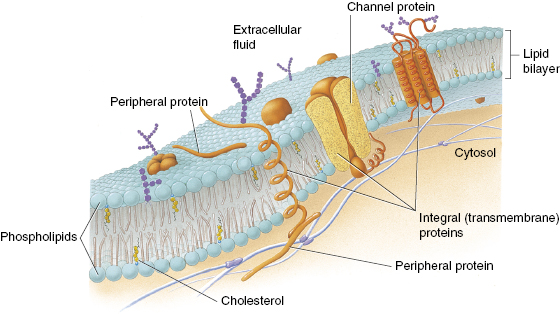 Although organelles are contained within the cytoplasm, they are separated into their own class of cellular components. Organelles are specialized subunits within the cell. Each organelle performs a specific function within the cell. For instance, ribosomes are responsible for transcribing DNA, a vital function for protein synthesis and cell survival. Others, like the mitochondria, are responsible for producing energy. An appropriate analogy of an organelle is that of an organ within the body. Each organ is confined within the body and performs a specific function. In a similar manner, each organelle, confined within the cell, performs a particular function to help maintain the life of the cell. Most organelles are encompassed by individual membranes. These membranes, similar to the outer cell membrane, allow flow of material into and out of the organelle. A typical animal cell, with associated organelles, is shown in Fig. 1.3. Keep in mind that Fig. 1.3 is for a typical mammalian cell. Red blood cells in the human body do not contain organelles. This enables them to deliver a greater amount of oxygen to the body.

Figure 1.3 Diagram of a typical animal cell showing selected organelles and general organization within the cellular membrane. From Tortora and Nielsen (2012), figure 2.1, p. 29. 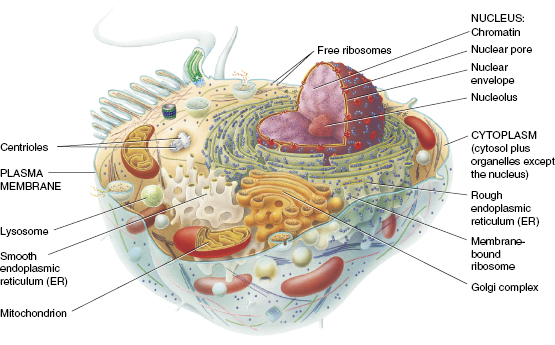 Another component of mammalian cells is genetic material. Genetic material, more commonly known as DNA, is located within the nucleus of each mammalian cell. Similar to other organelles, the nucleus is surrounded by a separate membrane, called the nuclear envelope. This membrane regulates the passage of substances into and out of the nucleus. It also localizes and protects the DNA within the cell. DNA is responsible for encoding messages for everything from the development of physical characteristics, such as hair and eye color, to when a cell should proliferate. The nucleus is the largest of the intercellular organelles and is often referred to as the control center of the cell. Although the nucleus controls the function of mammalian cells, red blood cells do not contain a nucleus. Since red blood cells do not divide once mature, there is no need for maintaining DNA and, hence, no need for a nucleus.

Cells are organized into groups that have similar structure and function. Once these cells have gathered together, they become known as tissue. Individual tissues are arranged into characteristic patterns of cells that are specialized for particular functions. The human body consists of four main tissue groups. These tissue classifications are epithelial, connective, muscle, and nervous. The following descriptions of each tissue group will explain basic differences in structure and function.

Figure 1.4 Epithelium tissue types. Squamous cells are most commonly found in the skin, cuboidal cells are utilized as lining for glandular ducts, and columnar cells are used for absorption of nutrients. From Tortora and Nielsen (2012), figure 3.5, p. 68.

Muscle tissue is found as elongated cells, called muscle fibers, throughout the body. The tissue is highly cellular and well vascularized. As the fibers contract, movement of either a body part, such as the arm, or an organ, such as the heart, is produced. There are three types of muscle tissue: skeletal, cardiac, and smooth.

Skeletal muscle is found as sheets of tissue, packaged by connective tissue, that attach to the skeleton. As the name implies, skeletal muscle is responsible for moving the skeleton. These muscles are the “flesh” of the body. Skeletal muscle cells are cylindrical, contain several nuclei per cell, and appear striated. The striations, or stripes, are created by precise arrangements of contracting proteins within the cell. Striations are also found in cardiac muscle. However, the structure of the cardiac muscle is different from the skeletal muscle in two ways. Cardiac muscle cells contain only one nucleus, and the cells are branched to fit tightly together at specific junctions. Cardiac muscle is responsible for circulating blood throughout the body with each contraction of the heart. In order to do this, cardiac muscle contracts in a steady rhythm. Unlike skeletal and cardiac muscles, smooth muscle does not contain visible striations. The cells contain one centrally located nucleus and appear spindle shaped. The role of the smooth muscle is to squeeze substances through organs, such as the stomach, via alternating contraction and relaxation. The contractions and relaxations are like waves moving through the tissue. As the contraction wave moves through the stomach, food is pushed into the intestines. Relaxation allows time for the muscle to reset and prepare for the next round of contractions. The muscle types of the body are shown in Fig. 1.5.

Figure 1.5 Muscle tissue types, including electron micrographs of each. Striated, or striped, cells are found in (b) skeletal and (a) cardiac muscle tissues. (c) Smooth muscle is found in the digestive system. From Tortora and Nielsen (2012), table 3.9, pp. 90–1, includes magnification factor for each electron micrograph. 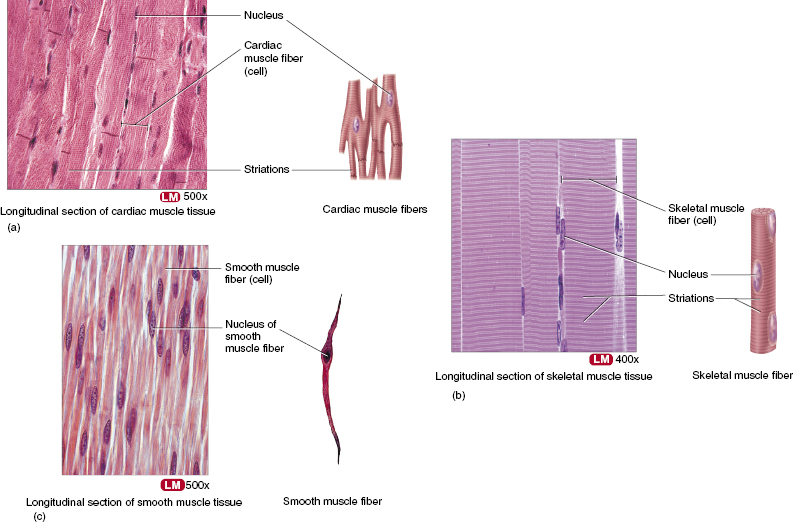 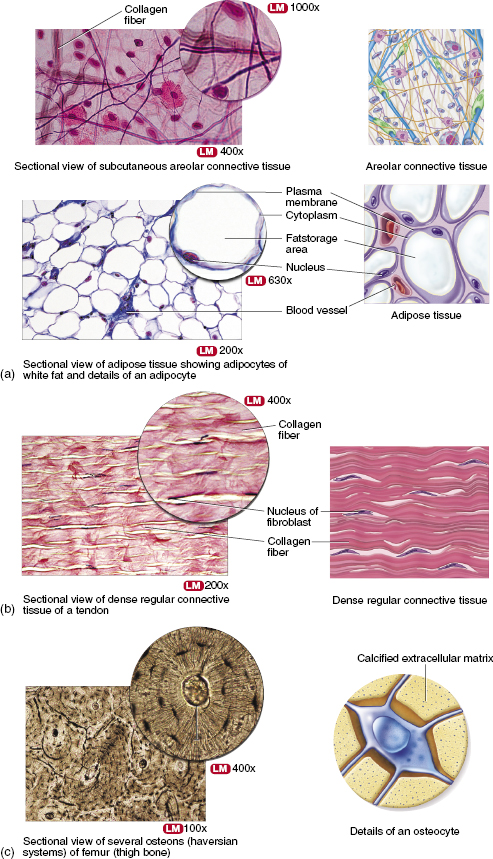