A 67-year-old female with multiple health problems presented with painful cool extremities. She was known to have a Stanford Type B aortic dissection that was treated medically with antihypertensive medications and β blockers. Physical exam was remarkable for nonpalpable femoral pulses. 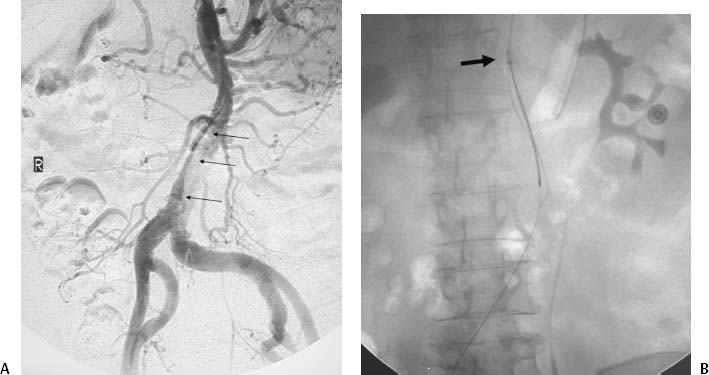 Figure 17-1 Endovascular treatment of symptomatic Type B aortic dissection. (A) Initial abdominal aortogram shows aortic dissection (arrows) with significant compression of the true lumen. The dissection did not appear to involve either common iliac artery. Note that this is a summed image and filling of iliac arteries was markedly delayed. (B) Fluoroscopic image shows snare capturing guidewire (arrow) advanced from left brachial puncture. (C) Fluoroscopic image of self-expanding stent catheter positioned in the true lumen at the level of compression. (D) Final abdominal aortogram showing rapid flow through the deployed stent into the iliac arteries.

A CT exam (not shown) performed at an outside hospital demonstrated a Type B dissection with significant compression of the aortic true lumen. The patient was brought to the interventional radiology suite for aortography. The right common femoral artery was punctured using the Seldinger technique, and a guidewire was advanced into the abdominal aorta. A 5-French (F) pigtail catheter was advanced over the guidewire into the infrarenal aorta. An aortogram was performed revealing the known dissection. There was very delayed filling of the iliac arteries due to significant compression of the true lumen of the aorta by the enlarged false lumen (Fig. 17-1A).

Type B aortic dissection with limb-threatening ischemia due to propagation of the dissection flap and subsequent compression of the true lumen by the enlarged false lumen.

A right brachial artery puncture was made using a 21-gauge needle with sonographic guidance. A 0.018-inch guidewire was advanced to the axillary artery, and the needle was exchanged for coaxial 3F and 5F dilators. The guidewire and 3F dilator were removed, and a 0.035-inch soft-tipped guidewire (Bentson, Cook, Bloomington, Indiana) was advanced from the puncture site into the aorta. The 5F dilator was exchanged for a 5F endhole catheter multipurpose angled (MPA). The catheter and guidewire were advanced in the true lumen to the aortic bifurcation slightly caudal to the level of the most significant compression.

The right common femoral artery had already been catheterized for aortography. The 5F pigtail catheter was exchanged for a 25-mm gooseneck snare. The snare was advanced to the distal abdominal aorta and used to capture the distal end of a guidewire advanced from the brachial artery puncture site (Fig. 17-1B). The snare was then pulled into the true lumen in the suprarenal abdominal aorta.