Axial CT scan at the level of the lateral ventricles.


Axial T2WI at the same level. 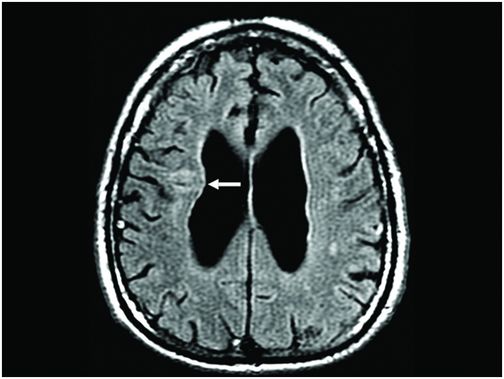 
Axial T2* GRE image at the level of the thalami.

Imaging findings of a calcified nodule that is associated with a small amount of surrounding vasogenic edema and low signal material, consistent with hemosiderin deposition, covering the cerebral hemispheres and subarachnoid spaces are highly suggestive of amyloid angiopathy associated with an amyloidoma.

Cerebral amyloidoma (CA) should be considered in patients demonstrating solitary or multiple intracerebral white matter masses with little or no mass effect, hyperdensity on non-enhanced CT scans, and contrast enhancement. Medial extension of the mass, up to the lateral ventricular ependymal, and a fine, irregular, radiating margin on imaging studies could possibly add specificity to this diagnosis. The most common locations of CA CNS lesions are the spinal cord, cerebral white matter, leptomeninges, and the gasserian ganglion. These lesions are frequently described as solitary, slow-growing, tumor-like masses.

Amyloidosis is a complex pathologic state secondary to intra- and extracellular space amyloid accumulation. In the brain, amyloid fibrils most commonly deposit in blood vessels, manifesting in many forms, including cerebral amyloid angiopathy, the senile plaques associated with Alzheimer dementia, and the deposits seen in Kuru and Creutzfeldt-Jakob disease encephalopathy. Tumoral deposition (amyloidoma) is the least common form of brain involvement by amyloid proteins, with no known cause.

Cerebral amyloidoma is more commonly found in the adult population (mean age at presentation, 47.8 years), with a slight female preponderance. Patients may present with history of epileptic seizures, hemiparesis, gait disturbance, visual impairment, cognitive impairment, and hearing loss. The clinical course of intracerebral amyloidoma appears to be benign, although these lesions can show slow growth, and they can recur after surgical resection.

Almost all cases of CA are located in the white matter of the cerebral hemispheres, more commonly in the frontal lobe, in the periventricular white matter, and in the choroid plexus. Cerebral amyloidoma can involve the peripheral nervous system, most commonly in the trigeminal (gasserian) ganglion, in the cerebellopontine angle, and in the jugular foramen. The great majority of these masses are confined to the supratentorial compartment, with very few cases reported in the brainstem or cerebellar hemispheres.

Cerebral amyloidoma is typically hyperdense on CT and commonly presents contrast enhancement. Amyloidomas tend to present little or no mass effect with little or no perilesional edema. On MRI, CA has a variable appearance. On T1WI, they can be hypo-, iso-, or hyperintense, relative to the surrounding gray matter. On T2WI, CA signal is usually mixed, with areas of high and low signal intensity. After gadolinium injection, the great majority of amyloidomas show enhancement. Cerebral angiographic results are normal, or may reveal vascular displacement due to the presence of the lesion. The majority of patients with CA demonstrate a medial extension to the ependymal surface of the lateral ventricle. Lateral ventricle wall thickening may also be observed.

Very few reports are available that discuss the potential advantages of advanced MRI methods in differentiating CA from brain tumors. Magnetic resonance spectroscopy may demonstrate non-elevated choline levels and reduced creatinine peaks, indicating the absence of increased membrane turnover. In patients with malignant tumors, one may detect elevated lipids and lactate peaks, not usually found in amyloidomas. Fractional anisotropy in amyloidomas tends to be lower, indicating destruction of normal tissue. Moreover, diffusivity values tend to be higher, indicating a non-malignant lesion. Low diffusivity is expected in cases of malignant tumors. Perfusion-weighted images may demonstrate a slight decrease in the signal intensity in the mass, as compared to the normal contralateral side, with rCBV ratio of 0.5. This is in contrast to malignant tumors, the rCBV ratio tends to be above 1.5 because of the increase in the capillary density. Susceptibility-weighted images may demonstrate absence of significant negative phase changes in amyloidomas, which is indicative of an absence of increased vascularity, a common finding in malignant lesions. Magnetic transfer ratio maps may demonstrate low magnetization transfer contrast in the lesion, as compared to normal-appearing brain, which is consistent with previous studies for detection of amyloid plaques in patients with Alzheimer disease.

Definitive diagnosis of amyloidoma is usually performed by brain biopsy and histopathologic examination. Central nervous system amyloidomas are usually slow-growing lesions with benign course and similar clinical characteristics to indolent tumors. For this reason, even though they are benign entities, they can present with the same treatment difficulties as other slow-growing tumors.