Midline sagittal T1WI through the level of the central pons.


Axial FLAIR image through the middle of the pons.


(A) Axial DWI through the level of the central pons. (B) ADC map through the same level. 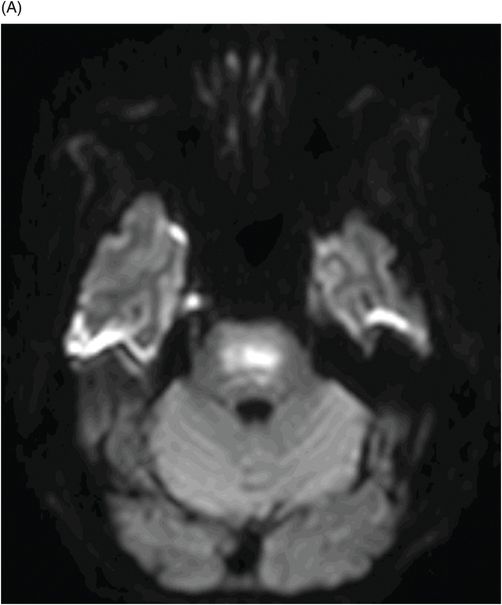 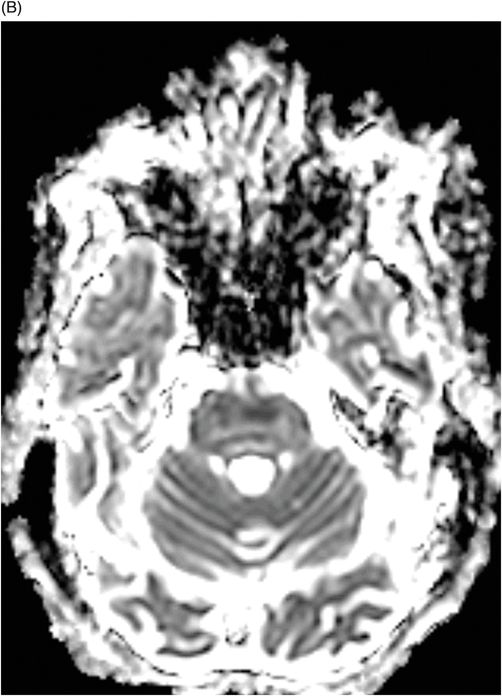 In this patient and clinical setting, the constellation of imaging abnormalities are diagnostic of osmotic demyelination syndrome (ODS). The rapid correction of hyponatremia in an ICU setting, with rapid-onset altered mental status is highly suspicious of ODS. Diffusion restriction and abnormal FLAIR signal at the central pons with sparing of the periphery is a typical imaging appearance associated with ODS. Abnormal FLAIR signal in the basal ganglia further suggests extrapontine involvement and diffusion restriction is conformational of the diagnostic acuity.

Although acute demyelinating plaque can have similar signal characteristics, the plaques are more commonly peripheral with variable extension to the central pons and the clinical context is different. Central variant of PRES is due to hypertensive emergency or other predisposing factors (see Part V: Case 62), unlike the predisposing factors causing ODS. The absence of mass effect and the clinical presentation is not suggestive of tumor.

Osmotic demyelination syndrome is a rare CNS disorder of unknown prevalence. Although it can involve patients of any age, the most common age of presentation is between 30 and 60 years, with a slight male predominance. The most common predisposing factor for ODS is rapid correction of hyponatremia. The exact mechanism of how the rapid change of natremic status induces demyelination is not known. Other common causes are alcoholism, liver transplantation, anorexia, and following hemodialysis in end-stage renal disease.

Patients typically present with rapid-onset confusion and seizures. This may be associated with bulbar or pseudobulbar palsy. Patients may have atypical movement if basal ganglia are involved. They may go through an intermediate improvement of symptoms as the natremic status reaches near to normalcy and then rapidly deteriorates again. With appropriate treatment, all of the symptoms can completely reverse. However, in severe cases, the patient may be in a coma for an extended period, may become quadriparetic, or may even die. If ODS is due to causes other than abnormal hematologic sodium levels, stabilization of the predisposing condition is necessary.

In the early phase of ODS, CT scans may appear completely normal. Evaluation of the pons with CT is limited because of artifacts. If there is strong clinical concern, then MRI should always be performed. In the acute stage, diffusion restriction may be the only finding, as other sequences appear normal. Over time, there is gradual development of T1 hypointensity and T2 hyperintensity that typically affects the central pons with sparing of the peripheral pons that may have a bat-wing pattern of involvement due to the sparing of the corticospinal tracts and the transverse pontine fibers. Hemorrhage is not a feature. Extrapontine abnormalities can be seen in up to 50% of cases and typically involves the basal ganglia.