A 76-year-old male presented to the emergency room with flank pain and a fever of 101°F. He was referred to the radiology department for noninfused CT angiography (CTA) to exclude nephrolithiasis. 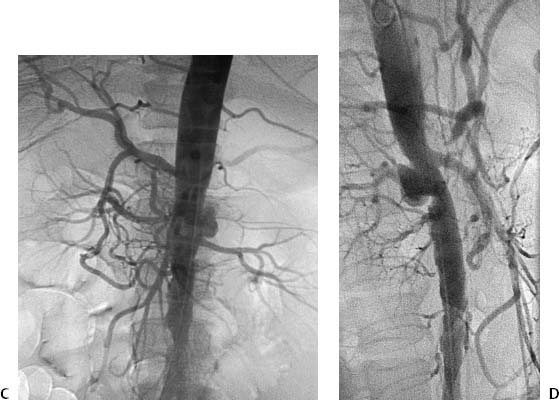 A noninfused CT study was performed and revealed a small amount of inflammation adjacent to the posterior abdominal aorta at the level of the mid-kidneys (Fig. 25-1A). The significance of this finding was uncertain, and the patient was sent home to receive close follow-up. Symptoms persisted, and a repeat infused CT exam was obtained 10 days later. This scan demonstrated marked progression of the inflammatory process and a new saccular aneurysm (Fig. 25-1B). The patient was then referred to the vascular and interventional radiology section for abdominal aortography.

The patient was taken to the operating room. The midabdominal aorta was resected and oversewn, and grafts were fashioned to the major visceral arteries. An axillobifemoral bypass graft was performed to provide arterial flow to the legs. The patient was placed on long-term antibiotics. Cultures of the resected specimen grew Salmonella.

Infected aneurysms or pseudoaneurysms of the aorta are rare. The classic triad of fever, pain, and pulsatile mass is found in fewer than half of affected patients. The term “mycotic aneurysm” is a misnomer as most infections are due to bacteria, not fungus. Salmonella is the most common causative agent of aortic infections; unlike most bacteria, Salmonella can invade the arterial intima. Staphylococcal aureus