A 45-year-old male who had end-stage renal disease requiring hemodialysis had a history of numerous central line infections causing thromboses and subsequent obstruction. He was referred to interventional radiology for tunneled dialysis catheter insertion. 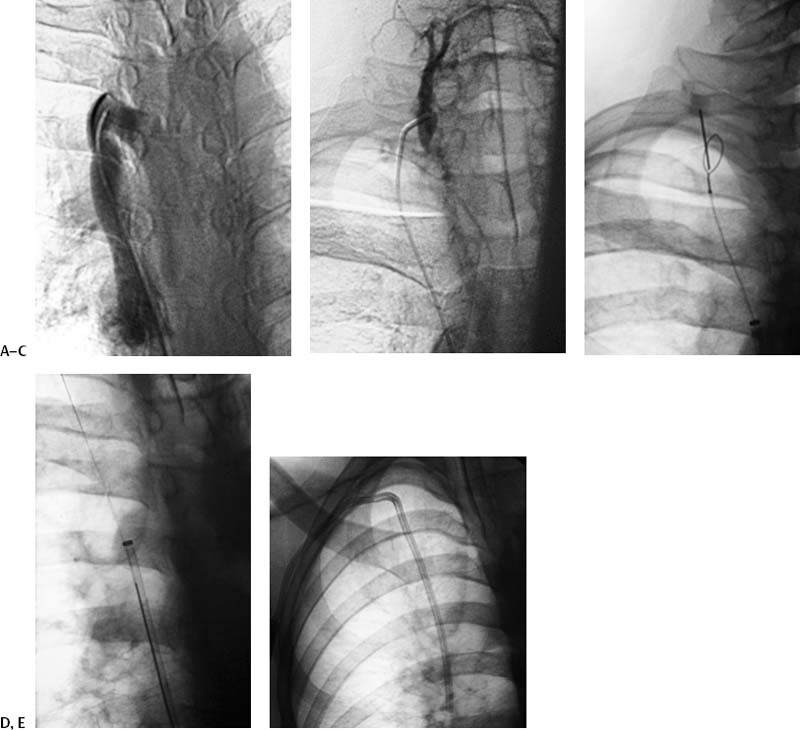 Sonographic evaluation of the neck revealed complete thrombosis of both internal and external jugular veins and occlusions of both subclavian veins.

WHAT ARE THE OPTIONS FOR TUNNELED CATHETER PLACEMENT AT THIS POINT?

Catheters may be placed in the femoral veins, the inferior vena cava by a translumbar route, hepatic veins, or in recanalized veins in the chest or neck.

The chest, neck, and right groin were cleansed, and antibiotics were administered prophylactically (ceftizoxime sodium, 1 g IV). The right common femoral vein was punctured and a guiding 9-French (F) vascular introducer sheath was advanced into the superior vena cava (SVC). A venogram confirmed occlusion of the SVC at the level of the azygous vein (Fig. 29-1A). A 180-cm rigid hydrophilic guidewire and hydrophilic coated 5F catheter were advanced into the brachiocephalic veins. The catheter and guidewire were used to engage a collateral vein in the neck (Fig. 29-1B).

Sonography was performed to choose a suitable puncture site away from overlying arteries. The catheter was exchanged for a 10-mm snare, which was opened in the vessel and used as a target. The loop portion was punctured with fluoroscopic guidance using a 21-gauge needle (Fig. 29-1C), the needle was exchanged for a 0.018” guidewire, and the snare was closed and used to pull the guidewire into the SVC (Fig. 29-1D).