The first case shows a 1-week-old premature neonate, born after premature rupture of the membranes. Case 1 presents with severe neonatal sepsis (Fig. 3A) and late change is shown in the second case (Fig. 3B). 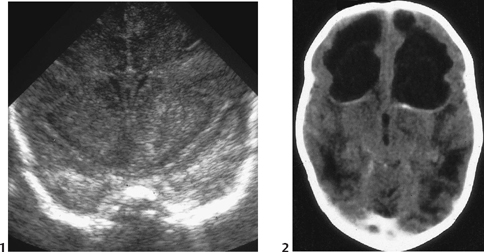 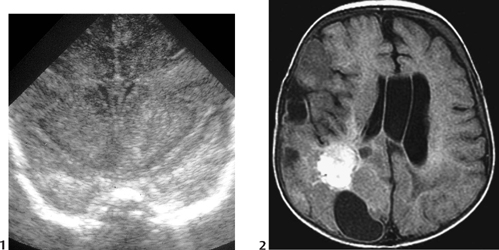 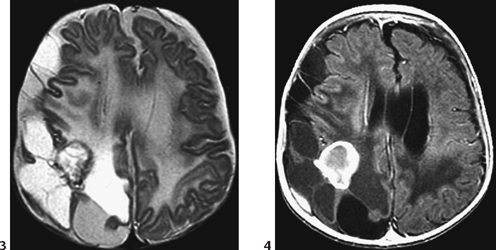 Figs. 3A1 and 3A2 show a 1-week-old neonate. Ultrasonography performed in the early stage of the disease (Fig. 3A1) demonstrates diffuse, increased echogenicity of the anterior part of the brain, especially on the left. Subsequent enhanced CT (Fig. 3A2) demonstrates large, necrotic cavitations with no mass effect and little enhancement in the white matter of both frontal lobes. Figs. 3B1 to 3B4 show the late changes in a 3-month-old child (different from the child pictured in Figs. 3A1 and 3A2) who survived the infection; the nonenhanced T1-weighted (Fig. 3B1), FLAIR (Fig. 3B2), and T2-weighted (Fig. 3B3) imaging shows massive and diffuse loss of white matter with multiple cysts of different signals, of which one in the posterior right hemisphere appears to be hemorrhagic. On the enhanced T1-weighted image (Fig. 3B4), the dense, presumably hemorrhagic lesion demonstrated a marked ring enhancement.

Although rare in the neonate, brain abscesses have a high rate of mortality and complications. Neonates are usually left with severe residual permanent damage, the more so as these infections are often insidious. Neonatal abscesses are most often due to various members of the Citrobactergenusor to Proteus mirabilis, more rarely to Escherichia colior Listeria monocytogenes.Maternal antibodies from the placenta and the colostrum protect normal neonates. However, premature and low-birth-weight infants are immunocompromised. The transmission may be sporadic or vertical from the mother (local vaginal infection, rupture of the membranes), and outbreaks have been reported due to horizontal nosocomial transmission by asymptomatic nursery staff.