A 47-year-old male had undergone renal transplantation 1 year before presenting to us with declining renal function. A biopsy performed 6 months earlier was unrevealing. Color Doppler and grayscale ultrasound was performed (Fig. 33-1). 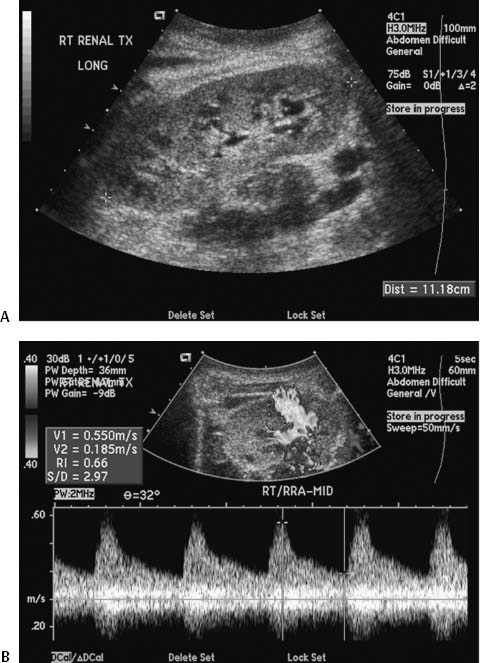 Grayscale ultrasound failed to reveal any abnormalties (Fig. 33-1A). There was no evidence of hydronephrosis or perinephric fluid collections. Color Doppler ultrasound showed prominent turbulent flow in the lower pole of the kidney with antegrade and retrograde pulsatile flow (Fig. 33-1B). 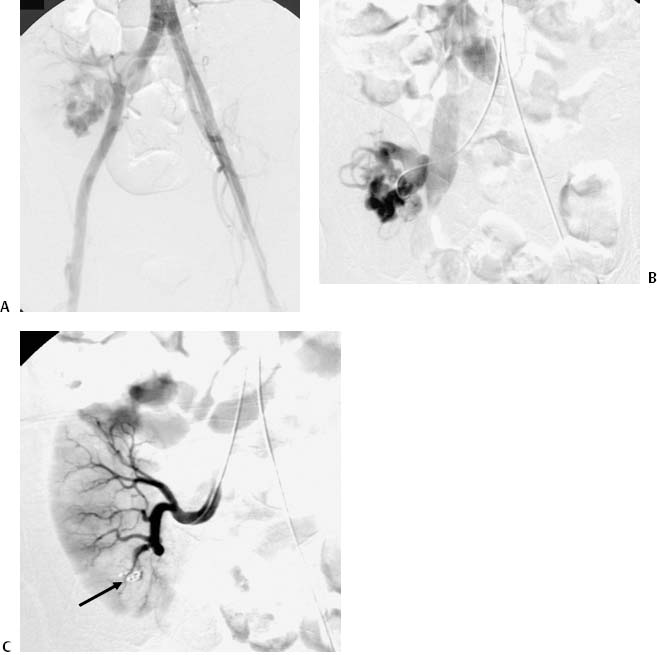 Figure 33-2 Angiography and embolization. (A) Pelvic arteriogram shows rapid shunting through the renal transplant. (B) Transplant renal arteriogram shows an early draining vein characteristic of arteriovenous fistula. (C) Angiogram obtained after coil embolization (arrow) shows occlusion of the fistula and preservation of flow to the remainder of the kidney.

The left common femoral artery was catheterized and a 5-French (F) sheath was inserted. A pigtail catheter was advanced into the lower abdominal aorta, and pelvic arteriography was performed (Fig. 33-2A) revealing rapid shunting through the transplanted kidney. The pigtail catheter was then exchanged for a 5F Roberts catheter (Cook, Bloomington, Indiana) that was used to selectively catheterize the transplant renal artery. A selective arteriogram showed the “early draining vein” characteristic of an arteriovenous fistula (Fig. 33-2B). The catheter was then advanced into the feeding artery of the arteriovenous fistula. Three 4-mm diameter embolization coils were then deployed to occlude the fistula. Final renal arteriogram showed occlusion of the fistula and preservation of flow into the remainder of the kidney (Fig. 33-2C). Subsequent ultrasound examination showed no further shunting (Fig. 33-3).