A 56-year-old female with an extensive history of peripheral arterial occlusive disease presented with a left foot ulcer. Located over the malleolus, the lesion was painful and had a necrotic base. Doppler exam revealed very weak pulse signals in the crural arteries. Ankle-brachial index was 0.2. 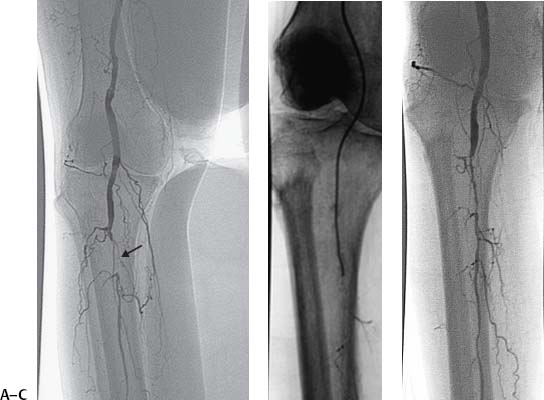 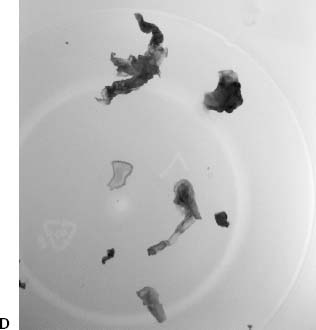 The left common femoral artery was catheterized in an antegrade direction using the Seldinger technique, and a 6-French (F) sheath was placed. A 5F multipurpose angled catheter was advanced into the superficial femoral artery, and left leg runoff was performed. The extremity angiogram revealed mild diffuse atherosclerotic disease of the superficial femoral and popliteal arteries with complete occlusion of the anterior tibial and posterior arteries. There was a short segment occlusion of the peroneal artery that was reconstituted distally via collaterals (Fig. 35-1A).

The left common femoral artery had already been catheterized for arteriography. Five thousand units of heparin were administered intra-arterially. The 5F catheter used for angiography was advanced down the superficial femoral artery, and a hydrophilic guidewire was used to cross the occlusion (Fig. 35-1B). The endhole catheter was then exchanged over a 0.014-inch guidewire for a SilverHawk plaque excision device (FoxHollow Technologies, Redwood City, California). The device was advanced to the lesion and used to perform an atherectomy. Follow-up arteriography showed rapid antegrade flow to the foot (Fig. 35-1C). Multiple specimens were removed from the device (Fig. 35-1D). Postprocedure medications included clopidogrel for 6 months. Revascularization enabled the foot ulcer to heal in subsequent weeks.

0.035″ and 0.014″ conventional and hydrophilic soft-tipped guidewires