A 52-year-old male presented to his primary-care physician complaining of increasing lifestyle-limiting left thigh claudication. On physical exam he was noted to have a diminished left femoral artery pulse. He was then referred to the interventional radiology section for evaluation. 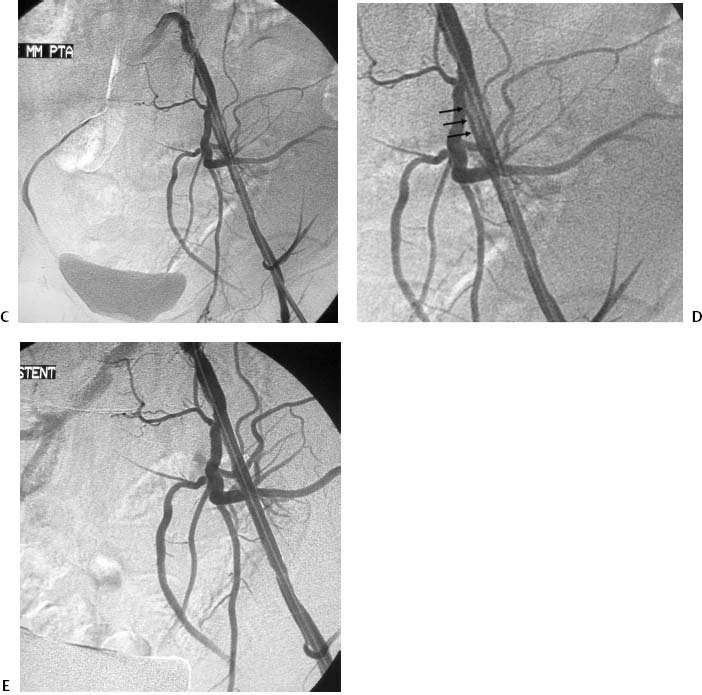 The left common femoral artery was catheterized using the Seldinger technique, and a 6-French (F) sheath was inserted. A 5F pigtail catheter was advanced into the abdominal aorta to perform pelvic arteriography, which showed absent flow beyond the catheter into the distal left external iliac artery (Fig. 36-1A). The catheter was then removed and an arteriogram performed through the sheath revealed a > 90% stenosis of the external iliac artery (Fig. 36-1B).

Five thousand units of heparin were administered intra-arterially. The lesion was crossed with a 0.035-inch Bentson guidewire (Cook, Bloomington, Indiana) and an 8- × 20-mm angioplasty balloon catheter was advanced to the site of stenosis and used to dilate the lesion. The angioplasty catheter was then removed leaving the guidewire across the lesion. An angiogram performed via the 6F sheath revealed resolution of the stenosis (Fig. 36-1C). However, a flow-limiting intimal dissection flap (Fig. 36-1D) was noted, and pressure measurement across the lesion revealed a residual gradient of 12 mm Hg. An 8- × 60-mm self-expanding stent (Wallstent, Boston Scientific, Natick, Massachusetts) was then advanced over the guidewire to the site of the dissection and deployed. It was then dilated with the angioplasty balloon catheter used earlier. Follow-up arteriography showed rapid antegrade flow through the external iliac artery (Fig. 36-1E); the dissection flap had been tacked down by the stent. A strong left common femoral pulse was noted.