A 9-year-old child presents with rapidly developing deficit of all four limbs. 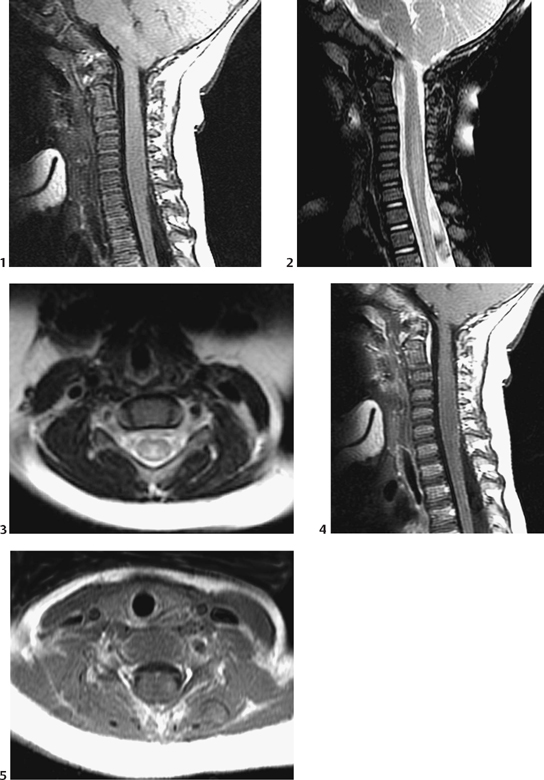 The sagittal T1-weighted image (Fig. 4A1) demonstrates fusiform enlargement of the cervical spinal cord, with patent surrounding CSF spaces, however. The signal of the cord is homogeneous, but with occasional cavitation, necrosis, or hemorrhage. Sagittal T2-weighted imaging (Fig. 4A2) demonstrates a homogeneous hypersignal extending from C3 to T1, and the axial cut (Fig. 4A3) shows that the abnormality covers both sides of the cord, fitting the anatomic definition of transverse myelitis. Infusion of contrast agent (Figs. 4A4 and 4A5) demonstrates a faint enhancement only, in the periphery of the lesion on the left side.

ATM belongs, together with acute disseminated encephalomyelitis (ADEM) and GBS, to the group of postinfectious, immune-related acute demyelinating disorders. The typical clinical course starts with an acute, often seasonal infection, which is followed after a few days by a sudden neurological impairment due to an acute episode of demyelination of the nervous system. Most commonly, the entire CNS is involved with disseminated areas of demyelination, making up the ADEM. Less frequently, only the spinal cord is involved, and the patient then presents with ATM. Even less frequent, only the nerve roots and distal nerves are affected, usually in an ascending manner, which defines the GBS. Acute demyelination is provoked by the antibodies induced by the initial infection, where the myelin has an antigenicity similar to that of the infectious agent. In acute