A neonate presents with convulsions on day 6 of life. 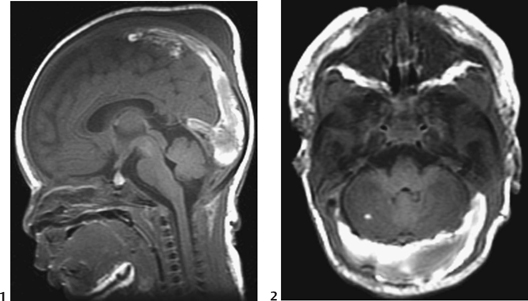 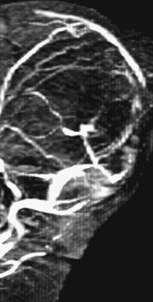 The nonenhanced CT (Fig. 5A1) demonstrates a heterogeneous high density within the enlarged lateral sinuses bilaterally, suggestive of intravenous clotting; the brain itself looks normal. Axial contrast-enhanced CT through the same plane shows that the contrast surrounds the clot in the dilated sinuses (Fig. 5A2, arrow). A reformatted image along the sagittal plane (Fig. 5A3, arrow) confirms clotting and shows that the thrombosis extends into the posterior half of the superior sagittal sinus (SSS). T1-weighted MRI confirms the thrombosis, its extension into the posterior portion of the straight sinus (Fig. 5B1), and into the lateral sinuses (Fig. 5B2). Fig. 5B1 also reveals cephalhematoma, which was an incidental finding. Note the dilation of the obstructed venous sinuses. MR time-of-flight (TOF) venography (Fig. 5C) shows that the flow is totally interrupted in the posterior part of the SSS and into the torcular, whereas it is somewhat maintained around the clot in the other segments affected with the intraluminal thrombosis.

The clinical presentation of cerebral sinovenous thrombosis (CSVT) in the neonate is subtle and nonspecific, making the clinical diagnosis more difficult than in older children or in adults. However, the disease has been increasingly recognized recently due to improved neuroimaging techniques. Also, the number of children at high risk for CSVT has increased because previously lethal disorders have an increased survival rate now (prematurity, congenital heart disease, leukemia, cancer). Only imaging can establish the diagnosis with certainty, which is needed before therapy because of the potential danger of prolonged anticoagulant treatment.