A 59-year-old female presented to the emergency department with blue toes on the right foot and was found to have a pulsatile mass in the right popliteal fossa. 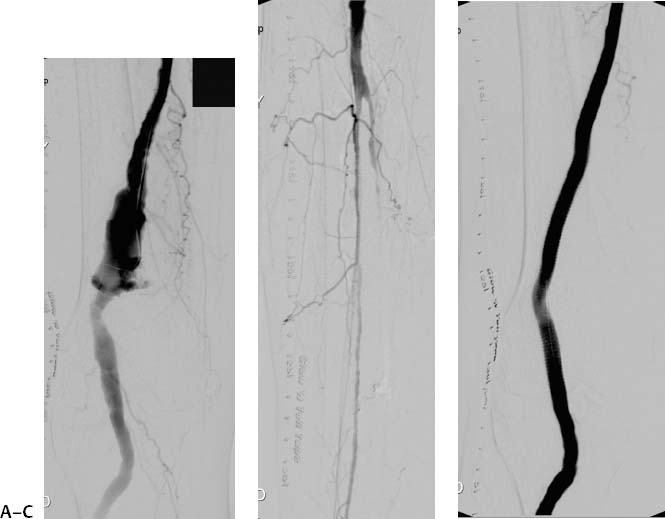 Figure 57-1 A 59-year-old female presenting with blue toes was found to have a pulsatile mass in the right popliteal fossa. (A) Conventional angiogram shows an aneurysm of the right popliteal artery measuring 2 cm in diameter. (B) There is single-vessel runoff via the peroneal artery. (C) Angiogram after placement of a Hemobahn stent graft (W. L. Gore & Associates, Flagstaff, Arizona) shows successful exclusion of the aneurysm and patency of the popliteal artery.

Conventional angiogram showed an aneurysm of the right popliteal artery measuring 2 cm in diameter and 6 cm in length (Fig. 57-1A). Within the aneurysm, there was mural irregularity with the suggestion of intraluminal thrombus. There was single vessel runoff via the peroneal artery (Fig. 57-1B).

In the operating room, stent-graft placement was performed by a team including a vascular surgeon and an interventional radiologist. A cutdown was performed to expose the right common femoral artery. The artery was punctured and a 12-French (F) vascular sheath was advanced over a standard guidewire in antegrade fashion. A Hemobahn stent graft (8 cm long, 5 mm diameter; W. L. Gore & Associates, Flagstaff, Arizona) was deployed across the aneurysm. Follow-up angiography showed popliteal patency and successful exclusion of the aneurysm without evidence of endoleak (Fig. 57-1C).

PAAs are the most common type of peripheral artery aneurysm, are more common in males, and are commonly bilateral. They often occur in conjunction with femoral or aortic aneurysms. Clinically, patients present with a cold lower extremity from acute thrombosis (Fig. 57-2A) or distal embolization, but many patients present with an asymptomatic pulsatile popliteal mass found on routine physical examination. Despite the fact that PAAs rarely rupture, elective treatment is strongly encouraged for symptomatic patients because up to two thirds of patients will experience complications such as acute lower extremity ischemia over a 5-year period. The treatment of PAAs in asymptomatic patients has been more controversial, but intraluminal thrombus and poor distal runoff have been identified as risk factors for future complications in cases managed conservatively. Many authors recommend surgical or endovascular treatment of asymptomatic PAAs that exceed 2 cm in diameter. The role of endovascular repair versus open surgical repair also remains controversial. The advantages of the less invasive endovascular technique must be weighed in each case against the possibility of slightly diminished patency rates compared with open surgical repair. Certainly, the endovascular approach has a role in the treatment of PAAs in suboptimal surgical candidates.