A 40-year-old male with a history of colorectal carcinoma and obstructive uropathy secondary to pelvic mass, status post cystoscopy and bilateral placement of ureteral stents 2 months prior, presented to us with fatigue and elevated serum creatinine. 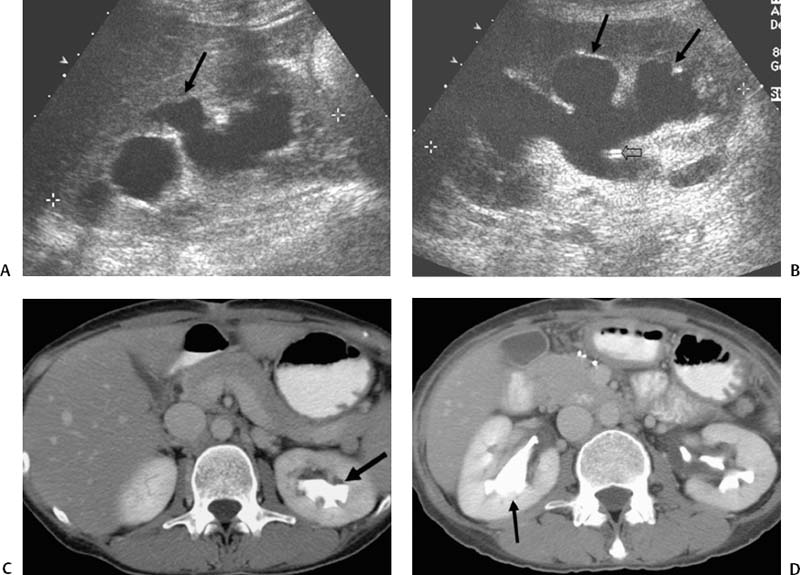 At cystoscopy, bladder invasion by tumor was found, and the internal ureteral stents were not able to be changed.

Preprocedural antibiotics (1 g cephazolin) were administered. The patient was placed on the fluoroscopy table in the prone position. The flanks were prepped and draped in sterile fashion. Sedation was achieved with intravenous fentanyl and versed. One percent lidocaine was used as local anesthesia at the puncture site. The puncture site was determined by ultrasound examination. In general, the shortest path to the kidney is chosen, which is usually slightly lateral to the lumbar musculature of the flank. A posterior calyx was identified and punctured with a 22-gauge needle. Urine was aspirated and sent for Gram stains and culture and sensitivity. A small amount of contrast was injected and a nephrostogram was obtained. The nephrostogram confirmed the posterior location of the calyx of entry and also showed hydronephrosis and hydroureter. A 0.018″ wire was advanced through the needle. Transitional dilators were introduced into the collecting system of the kidney, and a 0.035″ wire was introduced into the renal collecting system down to the ureter. Serial dilatation was performed with 7- and 9-French (F) dilators over the wire. An 8F multiside-hole pigtail catheter was advanced into the renal collecting system, and the wire was withdrawn. The pigtail loop of the catheter was formed and locked. The catheter was secured to the skin and left to gravity drainage.