7: Radiation Damage and Repair of Cells

Although radiation can damage the cell membrane, organelles, and other constituents, we will concentrate on damage to nuclear DNA because this damage can cause reproductive death, as well as mutations and cancer. Each of the over 10 trillion cells in the human body suffers between 104 and 106 DNA damage events each day. These events include breaks in the DNA chain and deletions, substitutions, and inversions in the DNA code. They are due to a variety of agents including ionizing radiation. Some causes, in addition to ionizing radiation, are environmental chemicals. For example, hydrocarbons in the atmosphere and plant products such as aflatoxins from moldy peanuts can cause DNA changes. Most of this DNA damage is repaired correctly with no ill effects. In general, radiation is a significant source of DNA damage, but it is by no means the only source.

DNA is a large molecule consisting of a sugar phosphate backbone with nitrogenous bases. The structure of the bases is shown in Fig. 7.1a. The bases on opposite strands only connect with their complement, that is, adenine–thymine, cytosine–guanine. When the strands are paired, the DNA molecule presents in a double-helix structure. Figure 7.1b shows a 2D view of the DNA double helix if it were untwisted and flattened. 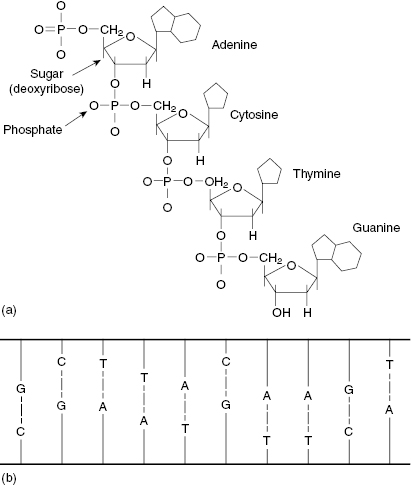 Single-strand breaks (SSBs) involve a break in only one of the DNA strands. Modest doses of low-linear energy transfer (LET) radiations will produce many SSBs. Because the nitrogenous bases are complementary, SSBs are relatively easy to repair, because the intact strand serves as a template. For example, an intact G will attract a C to occupy the break. Figure 7.2 shows schematically how if both strands are broken, but the breaks occur at different locations, the breaks can be readily repaired. This situation could be described as two SSBs on the same molecule. 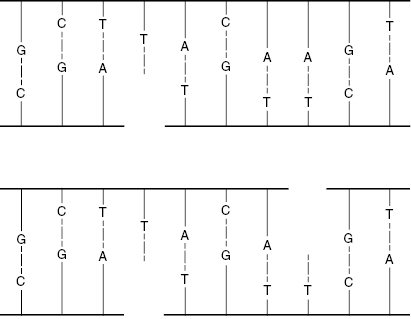 Double-strand breaks (DSBs) involve breaks in both DNA strands at the same or nearby locations, as shown in Fig. 7.3. Such breaks are more likely to result in faulty repair because the molecule may come apart, and the template for guiding the repair may be lost. DSBs are more likely to occur with high-LET radiations. Most DSBs are lethal because the fragments are stopped at one of the checkpoints in the cell replication cycle.

Figure 7.3 A double-strand break (DSB) can sever the DNA molecule, making repair more difficult, because the opposite strand template is lost.

Base damage includes deletions, substitutions, and additions to one or both of the DNA strands. The alteration of a base in the DNA molecule means that the sequence is disturbed. This changes the storage and transmission of information in the genome. There are many different types of base damage, most of which are detected and repaired before cell replication. However, some forms of base damage escape detection and are passed on to daughter cells. Note that only damage to germ cells, ova or sperm, results in hereditary damage.

Although SSBs can be damaging to the cell, the DSBs are the source of greatest concern. These are more likely to result in cell killing (DNA too damaged to allow the cell to divide normally), carcinogenesis (DNA damaged enough to damage apoptotic function, leading to cancer), or mutation (DNA incorrectly repaired). However, their occurrence is only 0.04 times that of SSBs after a dose of about 2 Gy.

In the past, the terms DNA break, DNA damage, and mutation were used interchangeably. Currently, we understand there is a basic difference between DNA damage and mutation. DNA damage is an aberration in the DNA sequence, for example, SSBs or DSBs and deletions or duplications of the DNA constituents. DNA damage is usually recognized by repair enzymes that constantly monitor the DNA integrity during the replication process. Damage that is recognized is repaired in most cases. Damage that is not recognized or is not repaired correctly will result in cell death or mutation.

Mutation, as opposed to DNA damage, is a change in the DNA base sequence not recognized by the repair enzymes. Thus, the mutation is not repaired and may be replicated. Cells may retain apparently normal reproductive capacity but have altered information in other parts of the genome. For example, a lung cell may still function as a lung cell, but have a defect in one of the genes acting during the cell cycle. The defect is not passed on to the progeny of the host organism, but it is passed on to the descendents of the mutated cell within the host organism. Only mutations that occur in gamete cells (sperm or ova) are passed on to the progeny of the host.

DNA mutations in rapidly proliferating cells may be more likely to lead to cancer simply on the basis of probability, because there are more chances of rapidly replicating cells producing a viable mutation.

Radiation may cause chromosomal aberrations, of which there are two types. Chromosome aberrations happen early in interphase, before the duplication of the DNA. The break is usually in a single strand of chromatin that will then be duplicated during the S phase. Chromatid aberrations happen later in interphase, after the S phase. Usually, one arm of the sister chromatid is broken, but not the other. The relative sizes of chromosome substructures are shown in Fig. 7.4.

Figure 7.4 Illustration of the relative sizes of portions of the chromosome. Top to bottom: DNA, chromatin, a segment of chromosome, and a full chromosome. The centromere is the point of intersection in the metaphase chromosome and is important in cell replication. 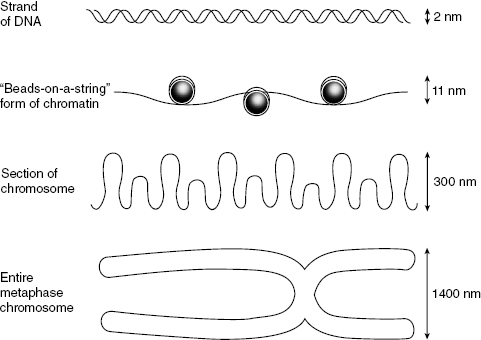 Although many types of aberrations can occur, there are generally three lethal types. Two of which, dicentric and ring, are chromosome aberrations; the anaphase bridge is a chromatid aberration.

Dicentrics form when two separate pre-replication chromosomes suffer breaks and rejoin by illegitimate connections that are subsequently replicated during the S phase. This can produce a pair of sister chromatids with two centromeres (hence the term “dicentric”), as shown in Fig. 7.5 and Fig. 7.6. The problem with the dicentric is that there is more than one centromere for the spindle to grab onto during metaphase, which disrupts the normal process by which the spindles pull the chromatids toward each pole during anaphase. 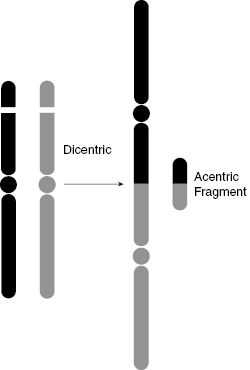 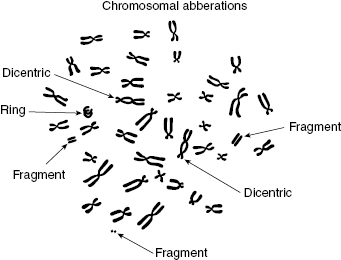 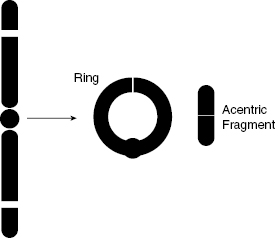 Figure 7.8 (a) Diagram of normal anaphase showing the normal separation of all chromosomes. (b) Fluorescent microscope imaging shows an anaphase bridge aberration in a mammary cell. Most of the sister chromatids have separated and are moving toward the opposite poles, but the anaphase bridge (green) cannot separate properly and so prevents mitosis. (Fluorescent micrograph courtesy of Dr. Allison Scaling.) 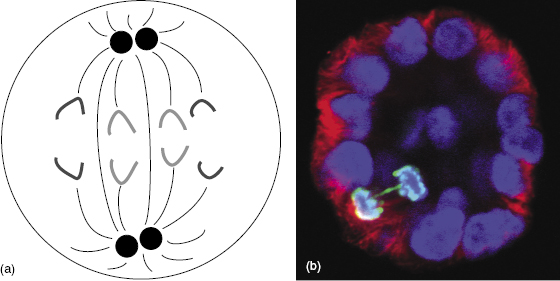 Not all aberrations are lethal to the cell. One of the nonlethal types is symmetric translocation, which is a break in two chromosomes that then swap the broken pieces. The translocation is a fairly stable aberration that can be passed on to progeny; therefore, the translocation can lead to mutation and carcinogenesis. Another nonlethal aberration is the small interstitial deletion, in which some genetic information is lost. If the loss of DNA includes the loss of a suppressor gene, the deletion could lead to a malignant change, namely cancer. Figure 7.9 illustrates a translocation, wherein two adjacent pieces of chromosome are broken and exchanged, and an interstitial deletion, wherein a small piece of chromosome is deleted and lost. 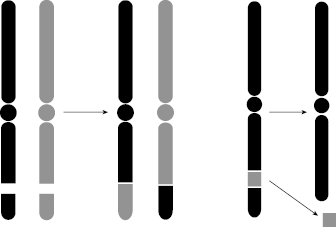 Note that both of these nonlethal aberrations are DSBs (both sides of the DNA ladder that makes up each chromatid must break for the chromatid to break). Nevertheless, with these nonlethal aberrations, there remains two sister chromatids with an intact centromere, such that the mechanics of mitosis can proceed normally. The problem with this type of aberration is that the resulting DNA code has some “misspellings” or “missing words,” and these errors can be passed on to future generations of cells.

The bystander effect, also called the radiation-induced bystander effect (RIBE), is an effect on cells outside the radiation field. RIBE refers to the observation that cells outside the radiation field can experience damage following radiation exposure to nearby (or even distant) cells in the same organism. The idea that radiation or its free radicals do not have to contact cells to damage the cells goes against traditional radiobiological thinking. Previous radiobiology tenets held that radiation damage was caused only by direct action of the radiation, or by the indirect action of the relatively short-ranged and short-lived radiation products (i.e., free radicals). The bystander mechanisms of action are not well understood, although the effect has been documented both in vitro and in vivo. Recent developments in DNA analysis have permitted the detection of changes in DNA structure resulting from mutations, which are passed on to future generations of the cell line or offspring of the host. These changes, collectively known as genomic instability, are one of the characteristics of the bystander effect.