Axial FLAIR image through the level of the centrum semiovale.


(A) Axial DWI and (B) ADC map through the level of the centrum semiovale. 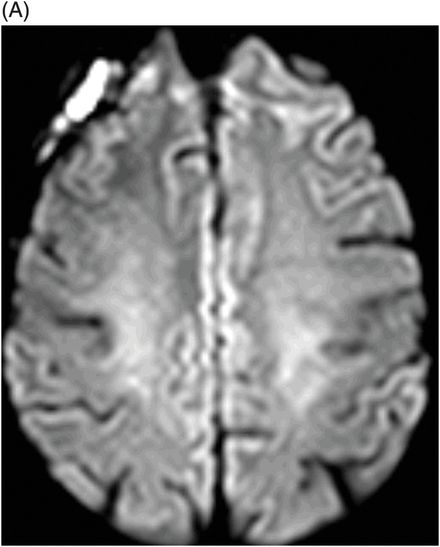 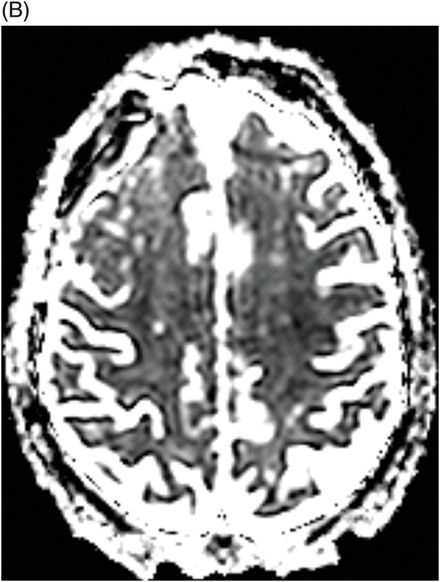 
Axial FLAIR image through the level of the centrum semiovale (before starting chemotherapy treatment).

Fig. 71.1: Axial FLAIR image through the level of the centrum semiovale demonstrated bilateral, almost symmetric diffuse confluent areas of FLAIR hyperintensity involving the centrum semiovale. Note the right frontal intra- and extra-axial FLAIR abnormality due to the frontal region primary CNS lymphoma. Fig. 71.2: (A) Axial DWI and (B) ADC map through the same level demonstrated areas of subtle diffusion restriction in the areas of FLAIR abnormality, as evidenced by increased signal on DWI sequence associated with low ADC value. Fig. 71.3: Axial FLAIR image through the same level before starting chemotherapy did not demonstrate any abnormal FLAIR signal in bilateral centrum semiovale. A large, right frontal lobe lymphoma was noted.

In isolation, FLAIR findings are suggestive of non-specific small vessel ischemic disease, a common imaging finding in elderly patients, particularly with a history of hypertension and chronic renal disease. However, in ischemic disease, abnormal FLAIR signal develops very slowly over years, as compared to developing over a few weeks, as in this patient. In addition, diffusion facilitation is present in the deep cerebral white matter in patients with small vessel ischemic disease, not diffusion restriction. Posterior reversible encephalopathy syndrome is a known complication of MTX therapy. However, imaging findings in this case are not typical for PRES – the typical imaging findings of PRES include patchy areas of posterior-predominant cortical/subcortical FLAIR abnormality, usually without any diffusion restriction. Abnormal FLAIR signal can be seen in the parietal and frontal lobes as well, but usually the cortical/subcortical white matters are involved instead of deep cerebral white matter (centrum semiovale). Although the imaging features are suggestive of subacute infarction, the imaging abnormality is diffuse, rather than focal.

Methotrexate is a dihydrofolate reductase inhibitor and is a commonly used chemotherapy in many different types of cancer, including lymphoma, both in a standard dose and as high dose with leucovorin rescue. It is usually administered intravenously, although intrathecal administration is used to treat leptomeningeal disease and in children, it is used prophylactically to treat hematologic malignancies. Methotrexate has several neurotoxicities that can develop following systemic and intrathecal MTX administration. Acute or subacute encephalopathy and leukoencephalopathy are common complications. Transverse myelitis has also been described as a complication of MTX treatment. The mechanism of MTX neurotoxicity is poorly understood. High CSF levels of MTX may produce direct acute/subacute toxicities. Other causes may be associated with the release of adenosine, resulting in the dilation of cerebral blood vessels and modified release of both pre- and postsynaptic neurotransmitters. These other mechanisms include altered homeostasis of homocysteine and folate metabolism, as well as single nucleotide polymorphism for the methylenetetrahydrofolate reductase (MTHFR) gene.

Acute or subacute encephalopathy is most commonly seen in patients treated with high-dose MTX and is characterized by somnolence, confusion, seizure, and focal neurologic deficit of varying severity. Usually this is reversible, resolves spontaneously without any sequelae, and retreatment with MTX is often an option. Symptoms may develop 2–14 days after starting therapy and can last up to three days. Imaging studies may be normal. Cortical/subcortical involvement is common and is described as PRES.

Leukoencephalopathy is another common MTX neurotoxicity and can be seen during any phase of MTX treatment. Leukoencephalopathy can be of two types, acute or subacute, with different presentations. Leukoencephalopathy presents similar to PRES but the abnormalities are limited to deep white matter, rather than cortical/subcortical areas. Known imaging findings include areas of abnormal T2 signal limited to the white matter. Unlike PRES, areas of abnormal FLAIR signal demonstrate diffusion. White matter involvement can be focal or diffuse. Focal abnormalities are associated with focal neurologic symptoms. There is usually no enhancement. Unlike in infarction, there is no change on perfusion imaging. Analysis of CSF is usually normal.

Chronic leukoencephalopathy usually develops slowly and presents with gradual cognitive decline. In children, learning disabilities present, sometimes in association with seizures, ataxia, and focal neurologic deficit. In many patients, symptoms may stabilize after discontinuation of MTX, but it may have a progressive course in others. Typically, MTX-induced leukoencephalopathy appears as diffuse deep cerebral white matter FLAIR hyperintensity. Diffusion imaging is usually normal but may demonstrate facilitated diffusion, rather than diffusion restriction. No abnormality is noted on perfusion imaging. These findings may be seen in addition to brain atrophy. A rare form of disseminated necrotizing leukoencephalopathy has been described in association with MTX therapy with a rapidly fatal course.

Principles for treatment of acute/subacute CNS toxicity of MTX are either rapid removal of CSF MTX levels mechanically or with intrathecal administration of glucarpidase in association with systemic leucovorin therapy.