Artifacts in MRI
Introduction
MRI, as with any other imaging modality, has its share of artifacts.
It is important to recognize these artifacts and to have the tools to eliminate or at least minimize them. There are many sources of artifacts in MRI. These are summarized as follows:

Let’s discuss this list in more detail.
Image Processing Artifact
Aliasing (Wraparound). Refer to the discussion on undersampling in Chapter 12.
Spin-Echo Imaging. Let’s say we’re studying the abdomen (Fig. 18-1). If the field of view (FOV) only covers part of the body, we know that we may get aliasing (wraparound), but what causes the aliasing?
We have a gradient in the x direction (Gx), with a maximum frequency (fmax) at one end of the FOV, and a minimum frequency (−fmax) at the other end of the FOV. These are the Nyquist frequencies (discussed in Chapter 12). Any frequency higher than the maximum frequency allowed by the gradient cannot be detected correctly.
The gradient doesn’t stop at the end of the FOV. The gradient is going to keep going because we still have magnetic fields outside the space designated by the FOV. The parts of the body outside the FOV (in this case, the arms) will be exposed to certain magnetic field gradients. One arm will receive a magnetic field that will generate a frequency higher than fmax for the FOV. It may be twice the frequency of fmax— twice the intended Nyquist frequency. The computer cannot recognize these frequencies above (fmax) or below (−fmax). They will be recognized
as a frequency within the bandwidth. The higher frequency will be recognized as a lower frequency within the accepted bandwidth.

Example
Suppose the frequency bandwidth is 32 kHz (±16 kHz). This means that if we’re centered at zero frequency, the maximum frequency fmax = +16 kHz and minimum frequency (−fmax) = −16 kHz (Fig. 18-1). If we have a frequency in the arm (outside
the FOV) of + 17 kHz, the perceived frequency will be
f (perceived) = +17 kHz −2(16 kHz) = −15 kHz
Now, the arm, which is perceived as having a frequency of −15 kHz (rather than +17 kHz), will be recognized as a structure with a very low frequency—only 1 kHz faster than the negative end frequency of the bandwidth—and will be identified on the opposite side of the image, the low-frequency side.

Remedy. How do we solve this problem?

Chemical Shift Artifact. The principle behind the chemical shift artifact is that the protons from different molecules precess at slightly different frequencies. For example, look at fat and H2O. A slight difference exists between the precessional frequencies of the hydrogen protons in fat and
H2O. Actually, the protons in H2O precess slightly faster than those in fat. This difference is only 3.5 ppm. Let’s see what this means by an example.


Example
Consider a 1.5-T magnet. The precessional frequency is as follows:

BW/pixel = 125 Hz
(This representation of BW on a “per pixel” basis is used by Siemens and Philips. It has the advantage of less ambiguity than the ±16 kHz designation, should the “±” be deleted.) Thus, each pixel contains 125 Hz of information (Fig. 18-8). Stated differently, the pixel bin contains 125 Hz of frequencies. Now, because fat and H2O differ in the precessional frequency of hydrogen by 220 Hz at 1.5 T, how many pixels does this difference correspond to?
Pixel difference = 220 Hz/125 Hz/pixel ≈ 2 pixels


This means that fat and H2O protons are going to be misregistered from one another by about 2 pixels (in a 1.5-T magnet using a standard ±16 kHz bandwidth). (Actually, it is fat that is misregistered because position is determined by assuming the resonance property of water.) If pixel size δx = 1 mm, this then translates into 2 mm misregistration of fat.
MATH: For the mathematically interested reader, it can be shown that
Chemical shift 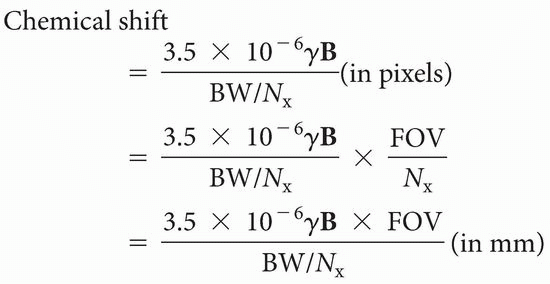 Example—Vertebral Bodies
With frequency-encoding direction—in this case, going up and down (and “up” having higher frequency) —the fat in the vertebral body would be misregistered down, making the lower endplate
bright due to overlap of water and fat and the top endplate dark due to water alone (Fig. 18-10). If we increase the pixel size, the misregistration artifact will increase.

Figures 18-11 through 18-15 are examples of chemical shift artifact.

Tags: MRI: The Basics
May 28, 2016 | Posted by drzezo in NUCLEAR MEDICINE | Comments Off on Artifacts in MRI
Premium Wordpress Themes by UFO Themes
WordPress theme by UFO themes