If left untreated, DVT can lead to significant morbidity and mortality, including pulmonary embolism (PE) and post-phlebotic syndrome. The annual incidence of venous thromboembolism is approximately 1 in 1,000 and increases with age. Since two-thirds of patients with venous thromboembolism are initially diagnosed as proximal lower extremity DVT, this leads to an annual incidence in the United States of DVT of approximately 200,000 cases.4 Without treatment, 50% of these will progress to PE with a resultant 30 days mortality of approximately 15%.4 With treatment, the complications of DVT are reduced to less than 5%. However, anticoagulation causes major bleeding in almost 2% of patients and mortality in 0.2%, so treatment should be limited to only those diagnosed with the disease.5 Therefore, diagnostic strategies need to have a high sensitivity and specificity.

The approach to isolated calf vein DVTs is still a source of great controversy. The tendency of these to propagate proximally is at the center of the debate concerning the best approach, including (1) repeat ultrasound in 1 week, (2) D-dimer testing for patients with a negative limited compression ultrasound, and (3) a single whole leg ultrasound.3 Superficial thrombophlebitis had been thought to never progress to DVT, though some studies are challenging that and even suggesting treatment for superficial thrombophlebitis involving the proximal greater saphenous vein.7

Clinical signs and symptoms of DVT consist of leg swelling and tenderness; however, only about 20% of patients who are clinically suspected of having a DVT actually have one. High-sensitivity D-dimer assays, when negative, have been shown to help rule out DVT in patients with a low clinical suspicion.8 Ultrasound of the proximal lower extremities has become the gold standard imaging test for diagnosing DVT. Most current algorithms for assessing patients with suspected lower extremity DVT involve using a combination of clinical suspicion, high-sensitivity D-dimer assays, and compression ultrasound of the lower extremity.8,9

Emergency medicine providers are uniquely qualified to use a combination of clinical suspicion, lab testing, and limited compression ultrasound to rapidly diagnose patients with DVT and safely discharge low-risk patients who do not have evidence of DVT.

The clinical indications for performing a venous ultrasound examination are as follows:

Suspicion of a lower extremity DVT

Suspicion of an upper extremity DVT

SUSPICION OF A LOWER EXTREMITY DVT

Virchow’s triad—hypercoagulability, venous stasis, and vessel injury—is the main risk factor for developing a DVT. The pathophysiology behind the development of venous thrombosis is not as well understood as arterial thrombosis, although both involve similar elements of the coagulation cascade. Once thrombus has occurred, reorganization of the clot begins. This process allows clefts to form between the clot and the vein wall, beginning about 1 week after initial clot formation; this is thought to be when the risk of PE is greatest. Over the next several weeks, the clot may be lysed and recanalized, leaving a thickened intima.

Only about half of all patients with DVT have any noticeable signs or symptoms. Risk factors for DVT are listed in Table 17-1. The combination of risk factors, physical examination findings, and clinician judgment has been developed into a clinical prediction model (Table 17-2).8,9 This clinical prediction model is often combined with a high-sensitivity D-dimer assay to decide who should undergo ultrasound evaluation for DVT.

Use of birth control pills or hormone replacement therapy

There are different views about how ultrasound should be used to assess for DVT. Historically, whole leg ultrasound has been performed in vascular laboratories. This is often referred to as duplex ultrasound, which combines compression ultrasound with multiple measurements using color and pulse wave Doppler. The entire leg is usually scanned, with measurements taken every few centimeters from the inguinal ligament down to and including the calf veins. This technique is time consuming, taking an average of 37 minutes to perform in one study.10

Most algorithms for the evaluation of DVT assume ultrasound is an expensive and time-consuming procedure, and so more emphasis is placed on clinical prediction models and D-dimer assays to exclude patients from requiring ultrasound21 (Figure 17-1). However, as emergency physicians become more adept at the technique, a limited compression ultrasound examination can be performed much more swiftly than a D-dimer assay. Using an ultrasound-first algorithm, all patients with clinically suspected DVT (whether low, moderate, or high) can have a limited compression ultrasound examination performed with the plan to have a repeat ultrasound performed in 1 week (Figure 17-2).

SUSPICION OF AN UPPER EXTREMITY DVT

Upper extremity DVT is thought to account for about 5% of all DVT cases.22 The most common causes of this disease process are malignancy, central venous catheters, and pacemaker wires. The vast majority of upper extremity DVTs is due to indwelling catheters and many occur in the subclavian vein. Other sources of DVT are the axillary and internal jugular veins. External jugular vein thrombosis is extremely rare.

While simple compression ultrasound works well in the lower extremities, the subclavian vein does not lend itself to compression. Therefore, excluding an upper extremity DVT depends on Doppler ultrasound and indirect confirmation of vein patency in a major venous segment. Although it has not been well studied, this suggests that ruling out an upper extremity DVT may be more difficult for less experienced providers. It may be prudent for less experienced providers to use upper extremity ultrasound to rule in the diagnosis of DVT, but not to try to rule it out. It is often straightforward to recognize a positive finding, so it is reasonable to do a brief point-of-care exam. However, patients with a negative point-of-care exam may need further evaluation with a comprehensive ultrasound exam or a CT scan, depending on the experience of the provider and the quality of the initial exam.

The venous system of the lower extremity is quite simple in a proximal to distal examination from the inguinal ligament to the level of the upper calf. Although many clinicians may feel they know the location and anatomy of the femoral vessels, few truly understand the details of the anatomy and variations that may be present. Historically, clinicians are taught that the femoral vein is located just medial to the femoral artery; however, ultrasound examination often reveals that vein and artery overlap rather than lie side by side. When this occurs, the typical arrangement is for the femoral artery to lie on top of the femoral vein.

Place the ultrasound machine to the right side of the patient, although convenience, clinician comfort, and patient positioning can dictate on which side of the patient it is placed (See Video 17-1). Many ultrasound machines have multiple attached transducers. Select a high-frequency linear array, 5–10 MHz transducer since it provides optimal venous compression and image resolution. Other transducers, such as a large curved array transducer, may be used if a linear array transducer is not available or deeper imaging is required. A curved array transducer, however, may compromise venous compression and superficial image resolution. A linear array transducer is ideal because the linear footprint provides more even compression over the vessel of interest than curved transducers. Controls that select various transducer frequencies and focus for a given transducer are available on most machines, and these settings may be adjusted once the examination has begun to further improve image quality (depending on the depth of the veins being examined).

Raise the head of the bed 15–30° or place the patient in a reverse Trendelenburg position in order to assure that the veins of the lower extremity are filled. Adjust bed height to a level comfortable for the clinician. Use an adequate amount of ultrasound gel during the examination. Finally, dim the lights in the examination room to improve image visualization (contrast resolution).

Select a 5–10 MHz linear array transducer for lower extremity scanning (Figure 17-5). Many ultrasound machines have settings that allow the clinician to adjust the frequency of the transducer. Higher frequency settings allow for better spatial resolution and improved viewing of more superficial structures, which maximizes image quality in thin patients. Alternatively, the lower frequency settings can optimize imaging in larger patients or deeper structures. Color Doppler and pulse wave Doppler may also aid in differentiation of arterial versus venous blood flow if the anatomy is difficult to identify. However, unlike the duplex ultrasound performed in most vascular laboratories, Doppler functions are used as an adjunct for identifying anatomy or assessing structures that cannot be compressed, and not as a primary modality in the limited compression ultrasound exam. 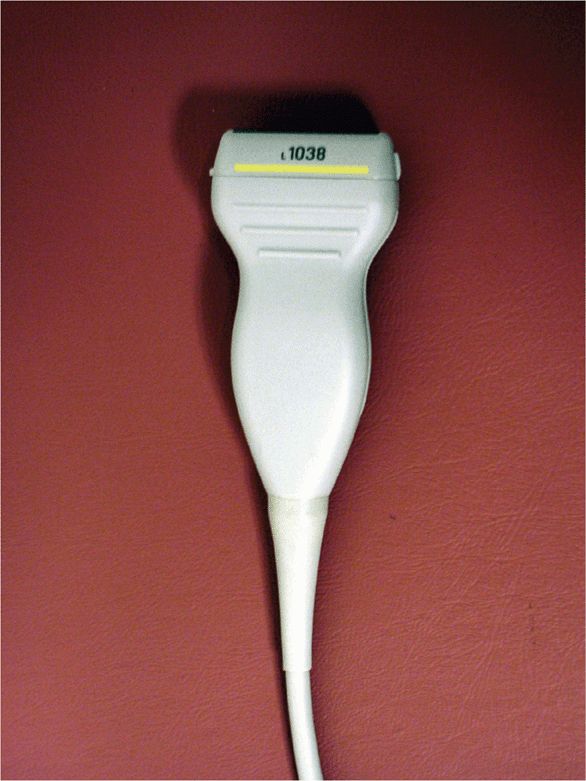 While venous compression is the most important method to evaluate the patency of veins in the lower extremity, some clinicians may choose to utilize color flow Doppler or spectral Doppler. Doppler techniques can be used to evaluate spontaneity, phasicity, direction, and augmentation of flow. In normal patent veins, flow is spontaneous and the velocity of flow varies (phasicity) with the changing intrathoracic pressures during the respiratory cycle. Typically, flow is anterograde and unidirectional unless there is venous valvular insufficiency. Additionally, venous flow can be augmented by applying pressure to the calf. Increase flow in the anterograde direction when performing this maneuver indicates patency of the vein. If an abnormality is noted using the Doppler adjuncts, have a heightened suspicion of venous thrombosis.

Place the patient in the supine position with the head of the bed raised 30–45° (Figure 17-6). This increases venous pooling in the lower extremities and distends the veins of the lower extremity. Extend the leg of interest and slightly externally rotate with the knee bent for the examination of the vessels in the proximal thigh (Figure 17-7). Obese patients may have an abdominal pannus that covers the proximal thigh and this should be raised. Usually, the patient can assist with this, but if unable, an assistant may be needed. Apply a liberal amount of ultrasound gel to the proximal thigh and place the ultrasound transducer on the thigh at the level of the inguinal crease.

Figure 17-6. A bed angle of 30–45° allows lower extremity veins to fill and makes them easier to locate. (Courtesy of James Mateer, MD)