Diagnosis and Characterization of Multiple Gestations


Figure 20.1.1
Twins at 5.0 weeks diagnosed by counting gestational sacs. A: Sagittal view of the uterus demonstrates two gestational sacs (arrows). No yolk sac or embryo is identifiable within either sac. B: Four weeks later, two fetuses (arrows) are seen, one in each sac. 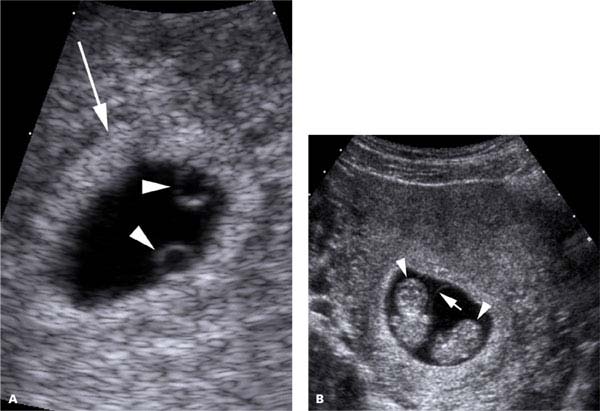 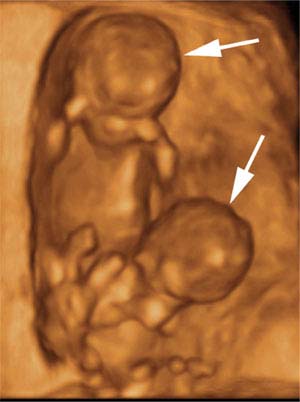 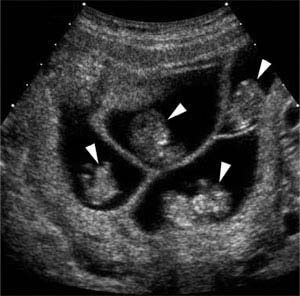 Figure 20.1.4
Quadruplets at 10 weeks, diagnosed by counting fetuses. Transverse view of the uterus demonstrates four fetuses (arrowheads), each in its own gestational sac. 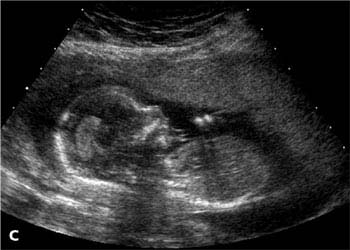 Figure 20.1.5
“Vanishing” twin. A: At 8 weeks, there are two fetuses (arrows), each in its own gestational sac. Heartbeats were seen in both. B: At 12 weeks, one of the fetuses (arrow) was small and had no heartbeat, while the other (calipers) had grown normally and demonstrated cardiac activity. C: At 16 weeks, the scan showed a singleton pregnancy with no evidence of the prior twin.

Figure 20.1.6
“Appearing” triplet. A: Sonogram at 5 weeks demonstrates two gestational sacs (arrows) within the uterus. No yolk sac or embryo was seen. B: Ten days later, the original two gestational sacs (long arrows) are again seen, but there is now a third smaller gestational sac (shorter arrow). Embryos with heartbeats were visible in all three sacs. On subsequent sonograms, all three fetuses appeared normal and grew appropriately. Normal triplets were born. 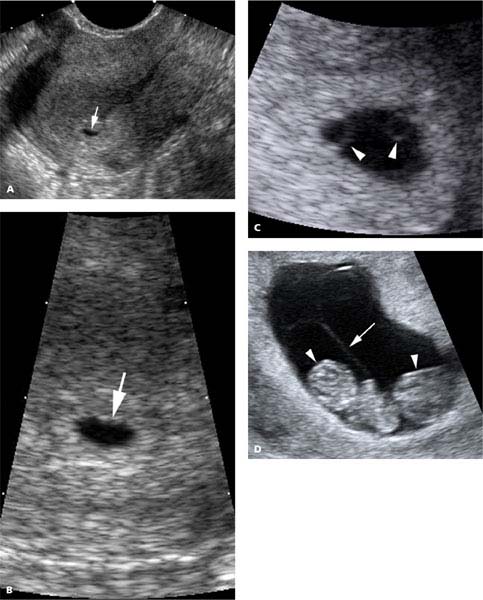 Because the chorion forms the placenta, the number of placentas is directly related to chorionicity. That is, monochorionic twins share a single placenta, whereas each twin of dichorionic gestation has its own placenta.

All dizygotic (fraternal) twins are dichorionic diamniotic because they are separated from the time of conception and thus implant separately in the uterus. The placentation type of a monozygotic (identical) twin gestation depends on when after fertilization the zygote divides:

Dichorionic diamniotic if division occurs in the fallopian tube (i.e., within the first 4 days after conception).

Monochorionic diamniotic if division occurs between approximately 4 and 8 days after conception.

In the first trimester, distinction between mono- and dichorionic twins is straightforward. Dichorionic twins are separated by a thick band of tissue or a thick membrane, whereas monochorionic twins have no membrane or a very thin membrane separating them (Figure 20.2.1).

In monochorionic twins before 7–8 weeks gestation, determination of amnionicity is based on the number of yolk sacs: if there is a single yolk sac, the twins are likely monoamniotic, whereas the presence of two yolk sacs indicates that the twins are likely diamniotic. At this stage of pregnancy, amnionicity is not determined by counting the number of amniotic sacs because the amnion is closely adherent to the embryo and thus not visible sonographically (Figure 20.2.2). As pregnancy progresses, the amniotic cavity fills with fluid and the amnion becomes visible by 7–8 weeks gestation, either as a separate membrane around each twin if diamniotic or as a single membrane surrounding both twins if monoamniotic (Figure 20.2.3). Failure to identify a separating membrane is not on its own sufficient to conclude that twins are monoamniotic. Monoamnionicity can be diagnosed with certainty only if there is nonvisualization of a dividing membrane in conjunction with either a single amnion encircling both twins (Figure 20.2.3) or intermingling of the twins’ umbilical cords.

Figure 20.2.1
Determination of chorionicity based on membrane thickness in the first trimester. A: Dichorionic twins—Sonogram demonstrates a twin gestation in which the two fetuses are separated by a thick membrane (arrow), indicating that the twins are dichorionic. B: Monochorionic twins—Sonogram demonstrates a twin gestation with two amniotic membranes (arrowheads), which meet to form a thin membrane (arrow) between the two fetuses.

Tags: Atlas of Ultrasound in Obstetrics and Gynecology 2
Aug 20, 2016 | Posted by admin in OBSTETRICS & GYNAECOLOGY IMAGING | Comments Off on Diagnosis and Characterization of Multiple Gestations
Premium Wordpress Themes by UFO Themes
WordPress theme by UFO themes