Embryology of the Eye

Development of the eye originates from neuroectoderm, surface ectoderm, and neural crest cells.1–3 The neuroectodermal layer gives rise to the retina, iris, and optic nerve, the surface ectoderm gives rise to the lens, and the neural crest cells are responsible for vascular structures, sclera, choroid, and mesenchymal tissue from which the adnexal structures, bony orbit, fat, and nerve sheaths arise.4,5

The prime regulatory gene for human eye development is PAX6, a member of the PAX (paired box) family of transcription factors. This gene initially is expressed in a band contained in the anterior neural ridge of the neural plate before the process of neurulation.6 A single eye field is present at this stage, which then separates into two primordial optic structures under the direction of sonic hedgehog (SHH), which belongs to a family of vertebrate genes involved with encoding inductive signals during embryogenesis and is part of a vast signaling network that affects development of many tissues and organs.6

The earliest sign of eye development is the appearance in a 22-day-old embryo of a pair of shallow grooves evaginating on either side of the prosencephalon or forebrain.6 The grooves form the optic vesicles in contact with surface ectoderm. Invagination of the optic vesicle leads to formation of a double-walled optic cup. This cup has two layers that become the retina, separated by the intraretinal space. The outer layer contains pigment granules that appear during the fifth week of development. The inner layer has two parts. The pars optica retinae occupies the posterior four fifths and contains cells that ultimately differentiate into the rod and cone cells responsible for light reception. The pars ceca retinae, within the anterior fifth of the inner layer, divides into the pars iridica retinae, which will form the inner layer of the iris, and the pars ciliaris retinae, which will be involved with formation of the ciliary body. The central retinal artery results from the residuum of the embryonic hyaloid artery, which regresses by 4 months of gestation. The lips of the choroid fissure fuse during the seventh week; the mouth of the optic cup becomes the future pupil.

Elongation of surface ectoderm cells in contact with the optic vesicle results in formation of the lens placode, which develops into the lens vesicle. The lens vesicle becomes located in the mouth of the optic cup (Fig. 4-1). Cells located in the posterior wall of the vesicle elongate, forming long fibers that fill the lumen of the vesicle, reaching the anterior wall of the lens vesicle by the seventh week of development. The vascular capsule is a mesenchymal condensation that covers the lens. The hyaloid artery supplies the lens, forming a plexus on its posterior surface.7 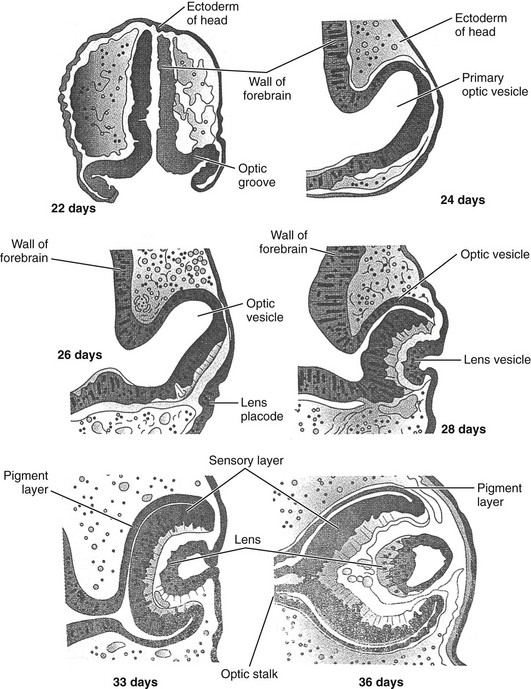 The primary vitreous develops from mesenchyme within the optic cup, which has an embryonic fissure, known as the canal of Cloquet. The hyaloid artery reaches the globe through this canal.

The hyaloid artery and its branches are a transient vascular system that nourishes structures of the eye, subsequently involuting by the 35th week of gestation.5

The optic cup and brain are connected by the optic stalk. The choroid fissure is a groove on the ventral surface of the optic stalk, wherein lie the hyaloid vessels. The fissure closes at 7 weeks’ gestation, during which time a narrow tunnel is formed inside the optic stalk. The inner and outer walls of the stalk fuse, becoming the optic nerve. The center contains a portion of the hyaloid artery, the central artery of the retina. The exterior of the optic nerve is covered by a continuation of the choroid and sclera, along with the pia, arachnoid, and dura.6

Development of the eye continues into postnatal life. The fovea centralis of the retina becomes differentiated by 4 months after birth. The cones remain poorly developed until 4 months after birth.8 The infant globe and orbit reach 80% of adult size during the first few years of life, with full size reached by approximately 13 years of age.

Normal Anatomy of the Orbit and Eye

The orbits are cone-shaped cavities containing the globes, extraocular muscles, blood vessels, nerves, retrobulbar fat, and lacrimal glands. Each orbit is bounded by the floor of the anterior cranial fossa superiorly, the maxillary sinus inferiorly, the ethmoid sinus medially, and the temporal bone and middle cranial fossae anterolaterally and posterolaterally (Figs. 4-2 and 4-3).