The first liver transplantation was performed in 1963, with posttransplant survival reaching 1 year in 1968.1 Subsequent use of immunosuppressants such as cyclosporine and tacrolimus, coupled with improved surgical techniques, has resulted in 1-year survival rates exceeding 90%.2,3 The organ pool for children has been increased by reduced-size liver transplants, the sharing of organs between two recipients, and living related-donor transplantation.4–6

Liver transplantation is indicated in children with irreversible liver disease, liver failure, nonresectable liver tumors, vascular abnormalities, and some metabolic abnormalities (Box 94-1).7 Biliary atresia with development of cirrhosis and portal hypertension after a Kasai portoenterostomy is performed accounts for more than 60% of liver transplants in children younger than 5 years. More than two thirds of patients with biliary atresia eventually require liver transplantation, with about one third of these procedures performed in the first year of life.8

• Cirrhosis as a result of chronic total parenteral nutrition

• Cirrhosis as a result of cystic fibrosis

Most liver transplants performed in older children involve the use of a whole cadaveric liver (Fig. 94-1), whereas most young children receive reduced transplants. Liver segments are defined according to the segmental and vascular anatomy.19 Most living donor transplants use the donor’s left lateral segment or left lobe, although the right lobe also may be used. A cadaveric liver may be split between two recipients; however, both result in challenging vascular and biliary connections because of limited pedicle lengths.5 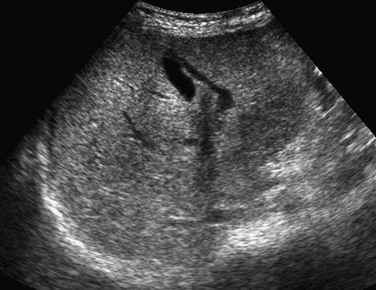 Left lobe and left lateral segment hila and their cut surfaces face to the right; however, they can be differentiated by the presence of the falciform ligament separating lateral segments two and three from medial segment four in the left lobe transplant, which is absent in left lateral segment grafts (Fig. 94-2). The small bowel, duodenum, colon, and right kidney often migrate into the vacated liver bed; a migrated cecum and right colon may imitate malrotation.

Figure 94-2 Segmental liver grafts.
A, Computed tomography (CT) of a left lobe liver graft. Note the ill-defined, irregular cut edge with adjacent fluid (short arrow). Fluid along the falciform ligament (long arrow) separates the left lateral segment (segments two and three) from the medial segment (segment four). B, CT of a left lateral segment graft. Note the course of the portal vein entering from the right (arrow) and the absence of the falciform ligament. Also note the position of the right kidney in the upper abdomen.

The donor hepatic artery usually is anastomosed to the recipient’s hepatic artery or celiac axis. The hepatic artery may be connected to the infrarenal aorta if technically required. In such cases the native hepatic artery is ligated and should not be confused with arterial occlusion on imaging. The bile duct typically is attached to a Roux-en-Y jejunal loop (Fig. 94-3). 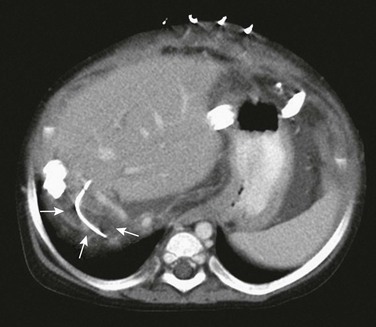 Figure 94-3 The Roux-en-Y biliary anastomosis and loop are marked early after transplantation by a small biliary stent (arrows).
Being an efferent loop from the liver, it frequently does not fill with intestinal contrast, making it difficult to differentiate from a pathologic fluid collection. Diffuse mesenteric edema and skin staples are noted.

In reduced-size transplants, the donor hepatic vein is connected to the recipient’s modified hepatic vein orifice. In full-size liver grafts, the donor liver is removed with the intrahepatic inferior vena cava (IVC), which is then interposed between the infraatrial and distal native IVC. The donor IVC may be sutured distally and connected proximally, piggyback fashion, to the preserved native IVC. In patients with polysplenia and biliary atresia, vascular connections may be modified as a result of the frequent absence of the hepatic segment of the IVC, azygous continuation, malrotation, a preduodenal portal vein, and other anomalies.5,20,21

Other complications include hepatic parenchymal defects, pleural effusions, and splenic infarcts, which may occur after splenic artery ligation.25,26 Right adrenal hemorrhage and right phrenic nerve injury are potential complications seen after the standard transplant operation, but they rarely occur after a cava-sparing operation.

Postoperative imaging is centered on evaluation of vascular and enteric complications. Therefore an understanding of specific surgical practice is essential.

Portable sonography may be used during surgery, mainly when vascular anastomoses are difficult or revised and their patency is uncertain. Vascular patency is evaluated daily with Doppler ultrasound for the first few posttransplant days because the fate of the transplant is much improved if vascular occlusions are diagnosed and managed early. The frequency of required ultrasound examinations then decreases, based on individual needs and clinical concerns.27,28

Early postoperative ultrasound may be challenging because of poor acoustic windows caused by dressings, open incisions, free intraabdominal air, and body wall edema. The flow patterns in all vessels vary in the early postoperative period because of edema of the anastomosis and surrounding tissues, as well as hemodynamic changes in the graft’s vascular bed. Vascular patency, flow direction, pulsatility pattern, and velocity can be evaluated using gray-scale, spectral, and color Doppler ultrasound techniques. The color velocity scale may need to be adjusted for each vessel separately to avoid aliasing in the faster flowing vessels, which can lead to ambiguity of flow direction. Efforts must be made to interrogate at the anastomoses, where stenosis, thrombosis, and occlusion are most likely.27 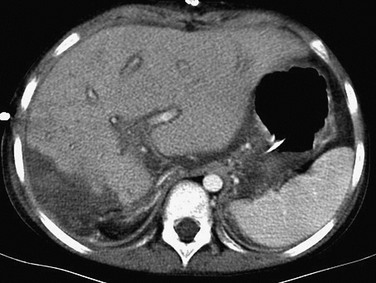 Periodic long-term ultrasound screening of liver recipients is mandatory because vascular complications may be clinically silent. CT, CT angiography (CTA), magnetic resonance cholangiopancreatography (MRCP), and magnetic resonance angiography (MRA) are used to determine the need for biliary and vascular interventions in selected patients. CT remains the primary modality for evaluating many intraabdominal complications, such as infection and PTLD. New magnetic resonance imaging (MRI) sequences have increased the utility of MRI in these patients, with the obvious advantage of avoiding ionizing radiation.29

Preoperative imaging is tailored to the patient’s underlying disease and coexistent conditions. The goals are to document vascular patency, define visceral and vascular anatomy, exclude contraindications, and evaluate the extent of liver disease and portal hypertension.

Pertinent anatomic features for surgical planning include a small, absent, or occluded portal vein; IVC thrombosis; biliary atresia associated with polysplenia syndrome and absent intrahepatic IVC, with hepatic veins draining into the right atrium; systemic drainage of the splenic veins; congenital portosystemic shunts; and malrotation. Transplantation may be impossible when both the portal and superior mesenteric veins are occluded or in cases of nonresponsive metastatic hepatoblastoma. Detection of hepatocellular carcinoma in a patient with cirrhosis changes the transplant urgency and requires tumor staging and decisions about pretransplant therapy, which affect the timing and feasibility of transplantation.27

Ultrasound is the method used most often in the preoperative evaluation of pediatric transplant candidates. Doppler ultrasound assesses vascular patency and hemodynamics. CT with intravenous contrast is excellent for showing vascular and visceral anatomy, unimpeded by overlying bowel gas. MRI may supply hemodynamic information and is superior to ultrasound in depicting varices, collaterals, and spontaneous splenorenal shunts. Bone radiographs may detect rickets, osteopenia, and fractures, and chest radiographs may show cardiomegaly and vascular prominence in patients with hepatopulmonary disease (see Chapter 93).29,30 Angiography is seldom needed but is reserved for patients for whom additional information might be required.

Overview: Hepatic arterial complications include thrombosis, occlusion, stenosis, peripheral arteriovenous fistula, and aneurysm. Acute arterial thrombosis may be catastrophic and result in acidosis, sepsis, and organ necrosis. Early hepatic artery thrombosis is associated with a high incidence of transplant loss.31 If the problem is diagnosed within the first 2 to 3 days and the patient is still asymptomatic, most transplanted livers with hepatic artery thrombosis may be salvaged. However, if elevated liver function tests, bile leak, liver abscess, or sepsis have supervened, graft loss may reach 75%.32

Imaging: The hepatic artery is much more difficult to visualize by gray-scale ultrasound than the portal vein because of its small size. It is best evaluated by color and power Doppler ultrasound.25