Vascular lesions of the spine are uncommon in the pediatric population. The most common vascular lesions include fast-flow lesions such as arteriovenous malformations (AVMs) and arteriovenous fistulas (AVFs). Less common are venous (formerly “cavernous”) malformations and spinal cord infarcts. Several syndromes are associated with spinal cord AVMs and AVFs, including hereditary hemorrhagic telangiectasia (Osler-Weber-Rendu), neurofibromatosis, and Parkes-Weber, Cobb, and CLOVES (congenital, lipomatous, overgrowth, vascular malformations, epidermal nevi, and spinal/skeletal anomalies or scoliosis) syndromes.1,2 Pediatric spinal AVMs and AVFs presenting at less than 2 years of age are especially likely to occur in association with syndromes such as hereditary hemorrhagic telangiectasia.1,3 However, recent reports have indicated that the association between Klippel-Trénaunay syndrome and AVMs may be erroneous. In a review of 208 patients with Klippel-Trénaunay syndrome, none was found to have spinal AVMs, as has been reported previously.4 Further review revealed that many patients previously reported in the literature as having Klippel-Trénaunay syndrome and spinal AVMs likely had CLOVES syndrome.5 This finding underscores the issues surrounding variable and inconsistent classification of pediatric vascular lesions.

Vascular lesions of the spine have undergone various classifications,1,6–10 in part because of the complexity of their diagnosis and features. The term “spinal arteriovenous shunt” is used to encompass both types of high-flow lesions (AVMs and AVFs). Because AVMs and AVFs are found in various locations (i.e., intramedullary, intradural extramedullary, and extradural sites) with variable feeding vessels, structural features, drainage, and hemodynamic changes, additional subclassifications have been proposed.6,8,9 On the basis of histopathologic discoveries, pediatric vascular anomalies increasingly have been classified using the International Society for the Study of Vascular Anomalies (ISSVA) system first published by Mulliken and Glowacki.3,11,12 This system, which allows for correlation between lesion histology, clinical presentation, and treatment, is now used widely by pediatric subspecialists including dermatologists, interventional radiologists, plastic surgeons, and neurosurgeons.10 The ISSVA classification system divides lesions into two broad categories neoplasms and vascular anomalies.10–12 Vascular anomalies are further divided into slow/low (venous and/or lymphatic components) and fast/high (arterial components) flow lesions.3 This chapter discusses pediatric vascular anomalies, including fast-flow vascular anomalies such as AVMs and AVFs, and slow-flow venous (formerly “cavernous”) malformations. Spinal cord infarcts are also discussed in this chapter although as neither neoplasms nor vascular malformations, and they fall outside the ISSVA system.

Overview and Etiology: AVMs are high-flow congenital communications between arteries and veins that result in arteriovenous shunting, causing the involved vessels to become enlarged and tortuous.12 AVMs contain a nidus (a Latin word meaning “nest”), or vascular network, that communicates between the arteries and veins. The high-flow dynamics within the AVM predisposes the involved arteries to aneurysm and veins to variceal formation.10 AVMs can be characterized further by the location of the nidus (within the spinal cord or on the cord surface), as well as by morphology of the nidus (the central, tightly formed “glomus” type or the diffuse, typically extensive, extramedullary “juvenile” or “metameric” type). In the pediatric population, the glomus spinal cord fast-flow AVM is the most common. In one large pediatric series, twice as many children had AVMs as had AVFs.6 AVMs may occur anywhere along the spine in approximate proportion with each segment, including 30% to 40% cervical and 60% to 70% thoracolumbar.

Clinical Presentation: The initial clinical presentation varies from acute paraparesis to slowly progressive myelopathy with weakness, sensory loss, and bowel and bladder dysfunction. Hemorrhage is more commonly seen in children (78%) compared with adults, especially in cervical cord AVMs. Children present acutely because of an arteriovenous malformation hemorrhage in 56% of cases.6

Imaging: Magnetic resonance imaging (MRI) is the best noninvasive modality for initial diagnosis and follow-up of a spinal arteriovenous shunt.6,13 Imaging findings of spinal cord AVMs include tortuous dilated vessels that can be within or on the surface of the cord. Hemorrhage has a variable appearance on T1-weighted and T2-weighted images depending on chronicity. T2-weighted images may demonstrate spinal cord edema and expansion.3 MRI also documents the presence of cord cavitation, atrophy, and venous thrombosis. Images obtained after administration of gadolinium may reveal cord enhancement, which is attributed to venous stasis, ischemia, or spinal cord infarction1 (Fig. 46-1). Distinguishing normal physiologic cerebrospinal fluid (CSF) pulsation and flow (particularly in the dorsal extramedullary midthoracic region) from vascular abnormalities requires optimization of spine imaging, which may include switching the phase and frequency encoding directions to decrease the effect of physiologic CSF pulsation. Computed tomography has a limited role in imaging AVMs but may document bony changes often seen in large, diffuse metameric-type lesions. Although MRI is excellent for the initial diagnosis, spinal angiography remains the gold standard for diagnosis and delineation of AVMs. 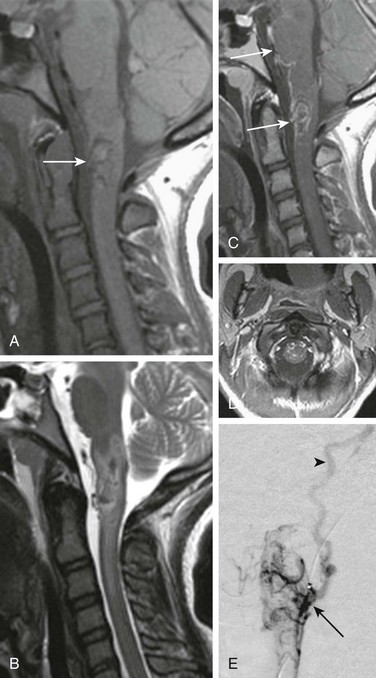 Treatment: Endovascular embolization is the primary line of treatment for fast-flow vascular anomalies, with the exception of lesions at the conus, which are managed surgically.1,3,6 In cases in which complete embolization or resection are not possible because of an unacceptable risk of morbidity or mortality, the goal of treatment is to reach a hemodynamic equilibrium between the lesion and the spinal cord that will reduce the risk of ischemia and hemorrhage.14,15

Prognosis: A spectrum of outcomes may occur depending on the lesion location, presentation, and treatment.15 The severity of symptoms at the time of diagnosis is directly related to patient outcome, with most symptoms persisting partially or completely after treatment.14

Overview and Etiology: The term AVF is used to describe a fast-flow lesion with a direct artery to vein fistula without a focal nidus, which is seen with AVMs. It is thought that AVFs likely are an acquired deformity resulting from microvascular injury and reparative healing, leading to an abnormal communication between an artery and vein.8,16 In a large pediatric and adult series, a higher percentage of multiple spinal cord fistulas was present in pediatric patients (46%) compared with adults (27%).6 AVFs are divided by location into two groups, spinal cord and spinal dural. Spinal cord AVFs are perimedullary in location and one third as common as AVMs in children. Spinal dural AVFs are extremely rare in the pediatric population.6

Clinical Presentation: The clinical presentation of AVFs is similar to AVMs, including slowly progressive weakness, sensory loss, and bowel and bladder dysfunction due to venous congestion, venous hypertension, and resultant myelopathy. However, AVFs hemorrhage less than AVMs, and acute presentations are uncommon.6