Relationship of the glossopharyngeal nerve (IX) to the posterior inferior cerebellar artery (PICA) (Adapted from: Takaya [13])

Glossopharyngeal neuralgia may mimic trigeminal neuralgia. Both may present with facial/jaw pain worse elicited by the same mechanical and sensory mechanisms. Cases may be difficult to differentiate in patients with pain in the region of the tragus or deep to the angle of the jaw [2]. However, compared to trigeminal neuralgia, glossopharyngeal neuralgia is relatively rare [1–3]. A diagnostic interventional block may be useful in differentiating the two etiologies and indeed may be the only mechanism available to the interventional pain management physician to definitively establish CN IX as being responsible for the pain.

The glossopharyngeal nerve (cranial nerve IX) is a mixed function nerve with motor, sensory, and special sensory fibers. The rootlets originate in the upperpart of the postolivary sulcus, between the olive and the inferior peduncle of the medulla oblongata, and exit the cranium with parasympathetic nerve fibers from the salivatory nucleus, the vagus and spinal accessory nerves (CN X and XI) via the jugular foramen. All three cranial nerves lie between the internal jugular vein and the internal carotid artery (Fig. 12.2). 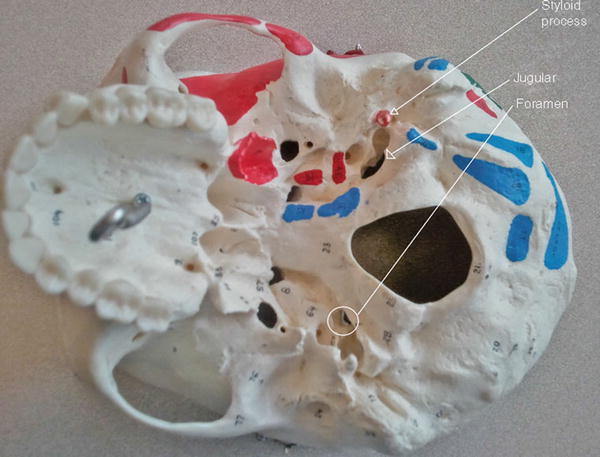 Base of the skull: the jugular foramen is where the glossopharyngeal, vagus, and accessory nerves exit the cranium (Photo courtesy of Kenneth D. Candido, M.D.)
The glossopharyngeal nerve has many distributive branches including the tympanic, carotid, pharyngeal, muscular, tonsillar, and lingual. The tympanic branch innervates the tympanic membrane. The carotid branch innervates the carotid sinus and carotid body. The pharyngeal branch carries sensory nerve from the walls of the pharynx. The tonsillar branch transmits sensory nerves from the tonsils. The lingual branch innervates the anterior surface of the epiglottis, the posterior third of the tongue, and the vallecula.
The motor component innervates the stylopharyngeus muscle, which elevates the pharynx during talking and swallowing. The sensory portion innervates the palatine tonsils, the posterior third of the tongue, and the mucous membranes of the oropharynx. Special sensory afferent fibers transmit information for taste from the posterior third of the tongue.
The carotid branch of CN IX, the carotid sinus nerve, innervates carotid body and carotid sinus. Therefore, damage to this branch has important implications for regulation of blood pressure, pulse, and respiration.

Indications for GPN Block or Neurolysis

High-resolution MRI [34, 35] or CT scan of the head may reveal tumor, bony erosion, multiple sclerosis plaques, abscess, or infection. Three-dimensional visualizations of the brain stem may identify, or MRA may show neurovascular compression or arteriovenous malformation. Visualization of the offending vessel was better in cases of compression from the PICA compared to the AICA [34].

Hasegawa et al. reported a case where magnetic resonance imaging suggested that the right vertebral artery (VA) was pressing on the glossopharyngeal nerve [36]. Balloon test occlusion of the VA was used to confirm the cause of the neuralgia. The neuralgia disappeared and reappeared with balloon inflation and deflation. Balloon test occlusion may be useful in the diagnosis of GPN and the selection of the most appropriate surgical treatment [36, 37].

Medical control treatment of GPN is similar to treatment for other forms of neuropathic pain, including trigeminal neuralgia. Antiepileptic drugs and tricyclic antidepressants alone or in combination have been studied with variable efficacy [38]. There is also a case report of GPN refractory to AEDs that responded well to opioids [39].
Antiepileptic drugs which have been used include carbamazepine, lamotrigine, diazepam, and gabapentin; tricyclic antidepressants used have included amitriptyline and nortriptyline [40–44].

Techniques for extraoral, intraoral, fluoroscopic, or ultrasound-assisted procedures have been described in the literature. Injections of local anesthetic and/or steroids, or alcohol neurolysis [45] and radiofrequency ablation [46, 47] are all options in management of glossopharyngeal nerve dysfunction.
Although ultrasound-assisted intervention has been reported [48], the use of fluoroscopy also allows the advantage of real-time imaging of the contrast media, so that in cases in which the needle tip has penetrated either the carotid or jugular systems, this activity should be observable and intravascular injection subsequently preventable or at least minimized.
Patients need to be monitored for a minimum of 30 min following the block to verify that there has been no systemic response to the injected local anesthetic solution. Even taking these precautions and using fluoroscopic or ultrasound guidance does not completely eliminate the possibility of local anesthetic spillover onto the vagus nerve (with resultant ipsilateral vocal cord paralysis) or onto the spinal accessory nerve (weakness of the trapezius muscle).
To test success of the glossopharyngeal nerve block (GNB), the operator can test for an obtunded gag reflex as a clinical indicator for analgesia [27]. There is a strong relationship between extent of the obtunded gag reflex and the extent of post-tonsillectomy pain relief [27].

The patient is placed supine with the head rotated slightly opposite from the affected side. The styloid process is used to identify the course of the GPN. Once identification of the mastoid process and the ipsilateral angle of the mandible is performed, the styloid process can be found equidistant between these structures (Figs. 12.3a–d and 12.4a, b). 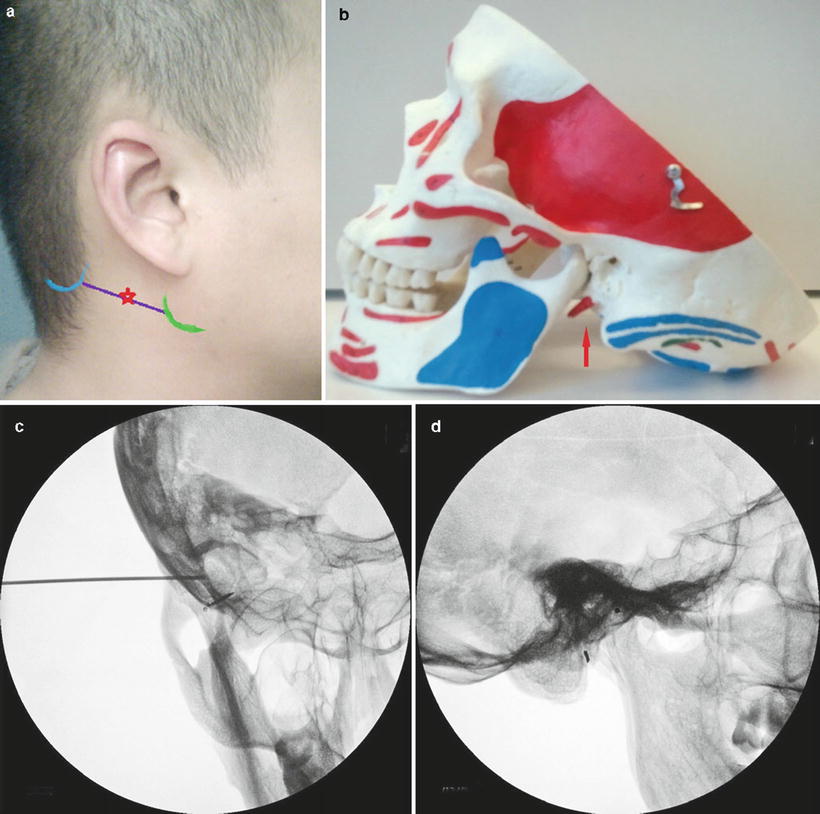 (a, b) Demonstrated is the relationship between the glossopharyngeal nerve and the styloid process. Ossification of the stylohyoid ligament (a) and elongation of the styloid process (b) can both cause compression of the glossopharyngeal nerve (Images courtesy of George C. Chang Chien, D.O.)
The skin overlying the styloid process should be prepped and draped in sterile fashion. A small skin wheal is made over the styloid process using a 25-gauge, 1.5-in. needle and 3–4 mL of 1 % plain lidocaine. Next, a 22-gauge, 1.5–2 in. blunt-tipped needle may be advanced perpendicular to the skin toward the process, aiming for its posterior aspect. The styloid process should be met at a depth approximating 1.5–4 cm. Once the styloid process is encountered, the needle is slightly withdrawn and “walked off” posteriorly. Aspiration should be performed to ensure that there is no blood or cerebrospinal fluid. Next, 1 mL of water-soluble, iodinated contrast media should be incrementally injected under live continuous fluoroscopy. Then, barring any intravascular spread, a short-acting, preservative-free (lidocaine, mepivacaine) and dilute (1 % concentration) anesthetic with epinephrine 1:200,000 (5 μg/mL) in a volume of 3–5 mL should be incrementally injected in divided doses. Nonparticulate corticosteroid (dexamethasone, betamethasone) may be added to the injectate, although there is no literature support to a salubrious effect of adding an anti-inflammatory glucocorticoid medication. 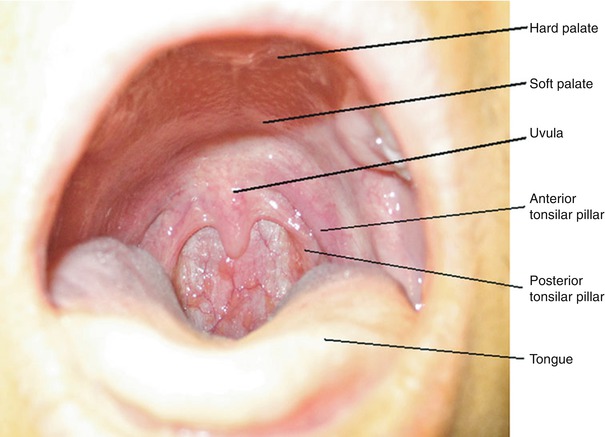 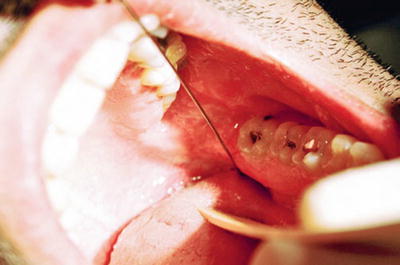 The patient is asked to open the mouth widely (Fig. 12.5). The operator may choose to anesthetize the tongue to facilitate the procedure. The tongue is swept to the opposite side with a tongue depressor, laryngoscope blade, or with gloved fingers. A 25-gauge, 3.5-in. spinal needle is inserted 0.5 cm deep, just lateral to the base of the anterior tonsillar pillar (ATP). Use of a spinal needle is advantageous for visualization of the tonsillar pillars by keeping the syringe out of the patient’s mouth [51]. After careful aspiration for blood or cerebrospinal fluid, 2 mL of local anesthetic (LA) or LA plus nonparticulate steroid is injected. The advantages of this method are that the ATP is easily identified and exposed, and the tongue movement does not trigger the gag reflex (Fig. 12.6).

The patient is asked to open the mouth widely. The tongue is depressed down with a laryngoscope blade (if done in the OR) or else with a tongue blade as described above. A 22-gauge, 3.5-in. spinal needle bent 1 cm from the distal end is directed laterally into the submucosa along the caudal aspect of the PTP (palatopharyngeal fold). After careful aspiration for blood and cerebrospinal fluid, 2 mL of local anesthetic and/or steroid is injected. The PTP method becomes more difficult in patients with large tongues or small oral opening and may cause greater gag reflex [52].

Potential undesirable side effects of glossopharyngeal nerve block may include the following: